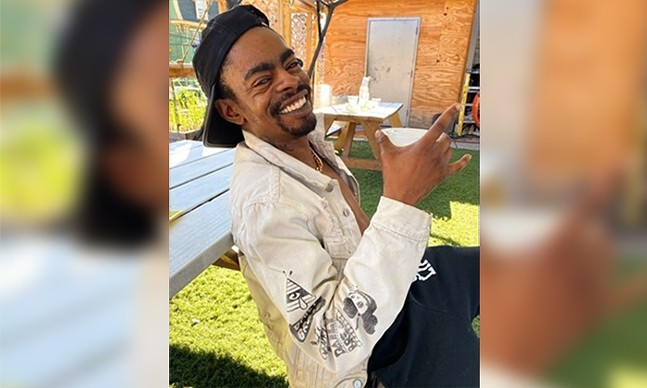 Alison Taverna, a fellow Chatham alum who graduated from the same program, remembers meeting him at the Greyhound station.

“He was coming off a 30 hour-plus bus ride from Mississippi and he had this tan, single duffel bag that outweighed him,” says Taverna.

She recalls how she had never met him before, and yet he was coming to live with her. “I knew nothing about him, but he had this big grin and wrote novels and talked so kindly about his family. That first year we watched movies on the floor, danced on the roof outside my window, ate lots of Popeyes at Thanksgiving, taped New Year goals to the fridge. Just laughed and listened and helped each other through the door, some days. And so, he became a type of home to me.”

Taverna was the first person I reached out to when I learned of Boosie's death on June 22, via a tweet posted by his friend, local hip-hop artist Brittney Chantele. He was struck by a vehicle on a road in Missisippi. Initial reports called it a hit and run, but was later updated to say the driver stayed with him until medics arrived.


Rest In Power King - you are SO loved pic.twitter.com/zjJLZkKD9y

At midnight on my 28th birthday, Jeffrey Bolden and I found a dead cardinal on my porch. Brilliant red feathers in darkness. We buried him and Boosie said a prayer. Just now a cardinal starting singing as I looked out into the trees. I will miss you, poet, magician. Thank you.

A lot of us lost a dear one today. I’m still sorting through so many love notes from him over the years. And soon, a whole book of his. He was generous; more. Pre-order WOLVES by Jeffrey “Boosie” Bolden : https://t.co/VDf58Ujghh pic.twitter.com/4LsX2oILaw

With great sadness, we announce the loss of Tolsun author, Jeffrey “Boosie” Bolden. Boosie had recently moved back to...


During his short time in Pittsburgh, Boosie left an indelible impression on everyone he met, myself included. This is evident in the social media reactions from people in the local literary and music communities, expressing shock at how this young, vibrant, talented person had been snuffed out.

Taverna and others, including local author and journalist Brittany Hailer, appear in his latest book, Wolves (Tolsun Books). In an email he sent me in May, Boosie called the book a “hybrid fiction memoir based upon true events based on Jeffrey Bolden's life, a work that explores survivor's guilt, bullying and toxic masculinity, love, and death through the lens of a young man that has seen too much.” After a series of back and forth replies, he signed off, “I appreciate you Scorpio!,” a playful endearment based on our shared astrological sign.

The book captures what made Boosie the kind of person you were glad to see at parties. His affectionate nature, his incredible way with words, his uncompromising shit-calling, especially in regards to systemic racism in all areas, including academia.

Boosie confronts the latter directly in Wolves, writing, “I received my MFA from Chatham University for Creative Writing in Fiction. Well, technically. I didn’t graduate with my peers. I didn’t walk.

"I called the former director of the program out, publicly, for her racist views and mishandling of situations between students. I was a loud and obnoxious voice who discovered dreams realized. I want to tell you that my dream was a slab of burnt-out concrete, but the truth is my dream could’ve been an ivory tower had I played the part of token. Had I played the role of a young John Edgar Wideman, an urban youth that told tales of the harsh streets of whatever ghetto contrived in white imagination. I could have had my castle in the sky. All I had to do was comply.”

He points out how he was one of only a few Black students at Chatham.

Boosie knew pain, and deeply. Anyone who heard his rap-influenced spoken word or readings knows this. How could he not, being a young, Black man in a country where he was devalued, punished, and disenfranchised, and where justice for Black people only comes if people go out into the streets and demand it.

Born in San Diego, Boosie and his family, including his three siblings, moved around a lot, but as Wolves indicates, he had a special connection to Mississippi, where he graduated from the same high school his mother did.

Boosie published books, was a regular at local literary events and readings, worked on Chatham's literary Fourth River journal, and created the performance piece A Collage of Song and Story. He also wrote an affecting essay for PublicSource about his own struggles with mental health and contributed to the local lit magazine, Everything in Aspic.

But besides his writings and other projects, people like Chantele will always remember Boosie as a close friend and a radiant person.

“Boosie was genuine, patient, caring, and loving,” says Chantele. “The conversations we had were deep and meaningful — I’ll never forget them and I’ll never forget Boosie and his ability to light up the room. If you crossed paths with him, you immediately noticed because of the way he carried himself and the way he made sure everyone around him was enjoying themselves.”

I, too, will never forget the times we had together, Boosie. The first time we met when you wowed everyone with your prose on my back patio. That cold winter night in Bloomfield when I bumped into you in your shaggy fur coat, and we dipped into a bar for a drink. The time at Jellyfish Disco when you asked what was playing, and when I told you “Head Over Heels” by The GoGo's, you nodded your head in approval of this newly discovered song. I'll remember all the times I saw you strolling down the sidewalk and stopped my car in the middle of the street just so I could yell, “Hey, Boosie!” from my rolled-down window, hoping you would throw a wave and a smile my way.

I appreciate you, Scorpio.

Wolves is available at the Tolsun books website. A GoFundMe is now raising money to help his family cover funeral costs and other expenses.