Pittsburgh meteor, "the greatest event of 2022," made into commemorative ornament 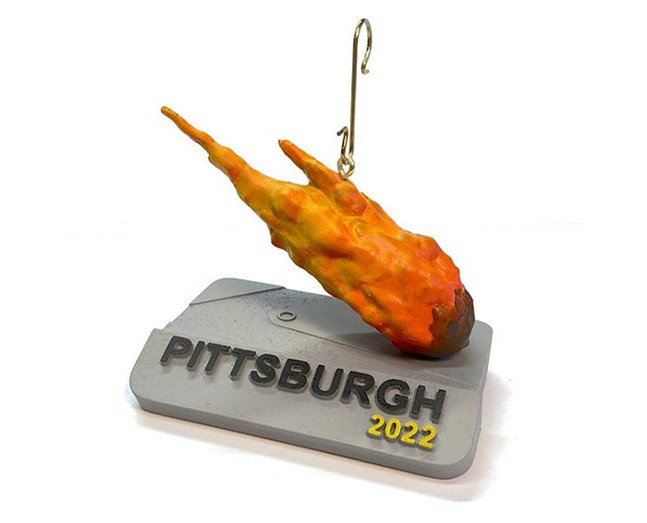 Toby Fraley's 2022 Pittsburgh Meteor Commemorative Ornament
First came The Sinkhole Bus. Then, The Filled Sinkhole. Now, only two days into the new year, artist Toby Fraley has officially declared Pittsburgh's meteor to be "the greatest event" of 2022, turning it into a commemorative ornament to celebrate the occasion.


"I'm hedging my bets and predicting the greatest event of 2022 happened in the first 11 hours of the year," says Fraley.

Shortly before noon on Jan. 1, reports of a loud boom and shaking came in from all over the greater Pittsburgh region on social media. An hour later, Allegheny County's official Twitter account reported that there was no seismic activity, no thunder or lightening, and that they had no explanation for the reports. Then, nearly five hours later, came the answer from Pittsburgh's National Weather Service: a likely meteor explosion.


"As a fan of all things space related, I was just really excited to happen to be in a location where I could hear it," Fraley says.

The artist has been commemorating Pittsburgh events since 2019 when he first made a keepsake ornament of Port Authority's bus that famously got trapped inside a sinkhole in Downtown Pittsburgh, followed by a 2020 version when the sinkhole was filled in. (There was no ornament for 2021 because, as Fraley says, the year deserved "zero" attention.)


Fraley's tribute to the meteor explosion has the same solid 3.5" wide base as his previous ornaments, with a hand-painted firey orange meteor cast in resin. (The meteor also kind of resembles a chicken leg covered in hot sauce and dipped in a dash of barbeque sauce, so we're all set for a backup commemorative ornament the next time the city ends up on one of those national foodie lists, too.)


"Ever since I did that Sinkhole Bus ornament in 2019, I’ve found people asking what the next year's will be," says Fraley.

Pre-orders for the 2022 Pittsburgh Meteor Commemorative Ornament can be placed now for $30 plus shipping and handling at tobyfraley.com. Orders will be shipped towards the end of February.