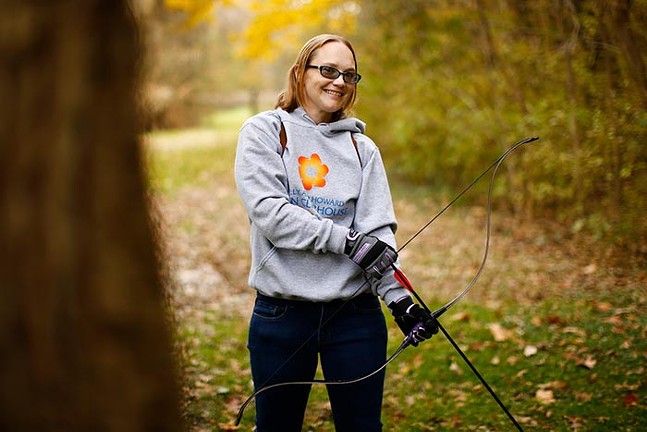 CP Photo: Jared Wickerham
Delaine Swearman
When people ask “What do you do?,” it’s been difficult for Delaine Swearman to answer. That’s because the question’s subtext is usually about employment.

But it’s not paying work — what many consider the primary marker of adult success. And because of that, she’s been ashamed in the past because she says she, like many, has “attached my identity to work.”

Swearman, originally from Somerset County, has dual diagnoses of mental illness and autism. In addition to surveying international Clubhouse facilities, she spends many days among her peers at Jewish Residential Services’ Sally and Howard Levin Clubhouse in Squirrel Hill. It looks like a rec center. Swearman writes on the computers there, and takes part in activities like yoga.

It’s a supportive environment where she can be successful and help others. She doesn’t have to explain that full-time work didn’t pan out, even though she earned a masters degree to become a physician’s assistant.

“My work, itself, I was able to do,” she says. “I couldn’t handle the full-time environment, and it really wore on my mental health.”

Many people with a mental illness have difficulties with employment. In 2014, the National Alliance on Mental Illness reported that about 80% of people receiving public mental health services in the U.S. were unemployed. For a while after Swearman left her profession, she avoided situations where she may be asked what she did for work.

“What does a person with a mental illness say when they’re not employed? I’m a nobody? I’m a burden to society?” Swearman says. “If you do say, ‘I’m on disability,’ you have an invisible disability, so people are going to be like, ‘Why? What’s wrong with you? You have two legs, why aren’t you working?”

She says that when she was ashamed of having a mental illness, she would stay quiet about the mistreatment and inequality that she and others experienced. She says she didn’t want to speak up because that would be outing herself.

Letting go of the past also included coming to terms with a diagnosis of autism at 30. By then, the years of confusion about her own behavior, seeing herself as different without knowing why or getting treatment, had taken a toll.

Swearman writes about this for Pittverse Magazine, a publication written by people who have autism spectrum disorder. In an essay in the winter 2019 edition, she listed experiences connected with being autistic that impact mental health. The list includes “social isolation, loneliness, feeling disconnected, being ostracized and bullied, misunderstanding one’s motives ... feeling overwhelmed by the expectations of being ‘normal.’”

Swearman says that, as a child, she tried to mimic peers’ behaviors and feign interest in others’ musical tastes. It isn’t uncommon. In 2018, The Atlantic magazine published an article titled “The Struggles of Women Who Mask Their Autism: By ‘camouflaging’ their condition, many women on the spectrum learn to fit in — and risk psychological harm.” Swearman was one of those interviewed in the piece, based on studies about females with autism masking symptoms.

“Camouflaging is often about a desperate and sometimes subconscious survival battle,” says Kajsa Igelström, an assistant professor of neuroscience at Linköping University in Sweden in the piece. “Gains in relationships and careers often come at a heavy cost, including physical exhaustion and extreme anxiety.”

Once Swearman, now 42, began speaking out about stigma and unfair treatment of people in her community, she made some personal strides. She wants the same for others.

When you open up about your diagnosis privately and publicly, she says, you “not only make connections with other people, but you’re also advocating for your community.”

“I have seen Delaine excel in the Clubhouse by making sure individuals are involved in decision making, prompting new people to learn skills, and she’s always the first person to sit down and make someone feel welcome,” says Joseph Herbick, director of the Clubhouse.

According to Swearman, she’s even become “the covergirl for the Clubhouse brochure,” she says, laughing. It shows how much more she accepts herself compared to the early days of her diagnosis.

“People with mental illness must be seen and treated and feel like equal human beings because we are equal human beings,” she says.This story was copublished with Unabridged Press and supported with funding from the Pittsburgh Media Partnership and All-Abilities Media — both based at the Center for Media Innovation at Point Park University.