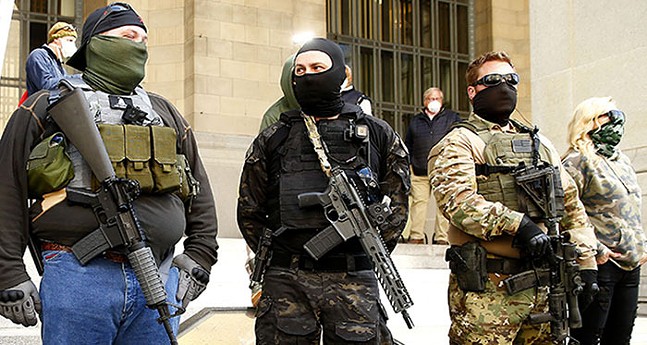 CP photo: Jared Wickerham
Members of Iron City Citizens Response Unit at anti-quarantine rally in Downtown Pittsburgh in April 2020
After losing the Democratic nomination in Pittsburgh’s mayoral primary election, retired police officer Tony Moreno secured enough write-in votes on the Republican ballot, and has since continued his campaign for mayor as a Republican.

This has included run-of-the-mill campaign events and door knocking, but also meetings with far-right former radio host Wendy Bell. In that vein, Moreno has apparently taken his campaign to an even more extreme level after meeting with and praising a local far-right militia group called Iron City Citizens Response Unit, a group that sports and highlights a symbol that has been linked to anti-government extremism and white nationalism.

In an Aug. 10 post on his personal Facebook page — which he often uses for campaigning — Moreno shared a photo of IC CRU leader Matt Wakulik and wrote, “Well, thanks these warriors.” Wakulik is wearing military garb and carrying an assault rifle over his chest in the photograph.

Pittsburgh City Paper first wrote about IC CRU in April 2020, when the militia group participated in an anti-quarantine protest in front of Pittsburgh’s City-County Building. In addition to military gear and assault rifles, many members of IC CRU were also wearing patches showing a symbol called a Valknot, or Valknut.

Screenshot taken from Facebook
According to the Anti-Defamation League, the Valknot is an old Norse symbol that often represented the afterlife and the Norse god Odin. The ADL notes it has gained popularity as of late with some white nationalist and white supremacist groups, but also notes that some “nonracist pagans may also use this symbol.”

When asked about the Valknots in April 2020, an IC CRU member, who refused to be identified, shouted “do your research” and then called City Paper “communist” and the “enemy of America.” In a later statement to the Pittsburgh Post-Gazette, IC CRU said they were “taken aback” by how their logo cast them in a negative light and that they “publicly denounce any form of racism and will stand with any minority group should the need arise.”

On his personal Facebook page, Wakulik often derides “communists'' and calls those with different ideologies “tyrants” and “evil” and seemingly supports violent vigilantism. On Aug. 10, Wakulik posted on Facebook praise for the racist manifesto “Might is Right or The Survival of the Fittest,” an 1890 book that, according to NBC News, is “filled with misogynistic and anti-Semitic rhetoric, is a staple among neo-Nazis and white supremacists on extremist sites.”

In a statement to City Paper, Moreno said he denounces any form of white supremacy.

“I unequivocally, without hesitancy, denounce white supremacy, their organizations, their motivations and their hateful messages,” said Moreno. “I am Hispanic and Native American and a minority, so I have no tolerance for hate in any form and will not associate or work with groups who support white nationalism.”

On his campaign website, Moreno lists his ancestry information and how his father is of Mexican and Native American descent and his mother has Scottish and Irish heritage. It has since been deleted from the website, but the site used to list the DNA breakdown of his ancestry, which stated Moreno as 52% Northwestern Europe, 19% Indigenous American, 13% Spain, 7% Ireland & Scotland, and 3% Basque. Moreno, who originally ran for mayor as a Democrat, came under scrutiny for past comments he had made on social media in support of former President Donald Trump.

On Aug. 12, several members of the IC CRU attended a campaign fundraiser event for Moreno at Le Mont restaurant in Mount Washington. One IC CRU member posted on Facebook that he was at the event and included the #RealSteel when checking in on social media. Moreno’s website is realsteelmayor.com. In a caption on a Facebook photo of IC CRU members at Le Mont, Wakulik wrote that IC CRU “has been asked to assist in protective service for certain high profile individuals in the city of Pittsburgh” and then went on to write that “the communist Marxist faction within our perimeter is strong and they reside in high positions within the corrupt governments of the county and city.”

In a statement, Moreno admitted that IC CRU was part of about 100 people who attended the campaign fundraiser, and was asked to attend, but only to support the campaign, not to provide security.

“Last night, about 100 people attended a campaign fundraiser at the LeMont in Mt. Washington, including a handful of members of the Iron City Citizens Response Unit,” said Moreno. “Everyone who was at my event last night was asked to attend for one purpose, and one purpose only — to support my campaign for Pittsburgh mayor, not to provide any protective services.”

A request for comment to IC CRU went unanswered by press time.

In summer 2020, IC CRU was hired by a gym owner in Ambridge, out of fears that a small Black Lives Matter march in Aliquippa would make its way miles across the Ohio River to Ambridge and damage a small gym on Merchant Street in the Beaver County borough, according to the Beaver Countian. IC CRU even posted up on the roof of the building, waiting for civil-rights marchers that never came.

Screenshot taken from Facebook
IC CRU and Wakulik are advertised to attend an “Red, White & Blue Freedom Cruise” event on Sun., Aug. 22, which includes a boat parade and rally at Tequila Cowboy bar in the North Side. The owners of Tequila Cowboy have donated to Moreno’s campaign, according to filings. Other attendees advertised on the boat parade flyer, which includes the IC CRU symbol and Valknot, are Moreno, Republican Lt. Gov. candidate Rick Saconne, and others.

UPDATE - Aug. 17, 3:40 p.m.: According to Pennsylvania Capital-Star reporter Stephen Caruso, Republican governor candidate Jason Richey has pulled out of the Aug. 22 boat parade and rally due to the connection the event had with the IC CRU.