Pittsburgh Mayor Bill Peduto explains why he isn’t backing the Green New Deal, but why he is also opposed to fracking | News | Pittsburgh | Pittsburgh City Paper 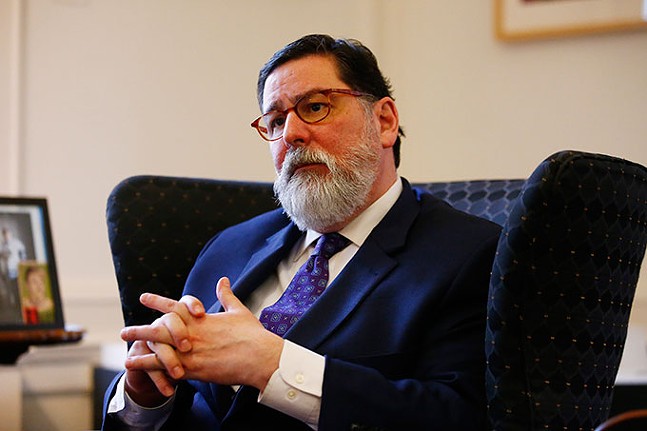 Local Democrats voiced their displeasure and several elected officials called for the elimination of the endorsement process altogether. Allegheny County Democratic Committee chair Eileen Kelly held a press conference on Feb. 19 where she defended the endorsement process, downplayed the Trump support within the committee, and criticized Allegheny County Executive Rich Fitzgerald, who supports Roland, for creating division within the party.

The week was chaotic, but the episode was just another example of a widening rift in Allegheny County Democratic politics. The endorsements of Kass and Roland showed support for more conservative members in the party, in lieu of more progressive members like Lee. These two factions highlight slight differences over policing and abortion access, but the most noticeable divergence is over natural-gas drilling, aka fracking.

Fitzgerald is a proponent of fracking, and has a coalition of like-minded Democrats who support the industry, as well as some stricter regulations to ensure environmental protection. But others, like Lee, believe fracking needs to come to an end, as the industry has created a myriad of health problems for residents and wells have leaked copious amounts of methane, a powerful greenhouse gas, into the atmosphere. 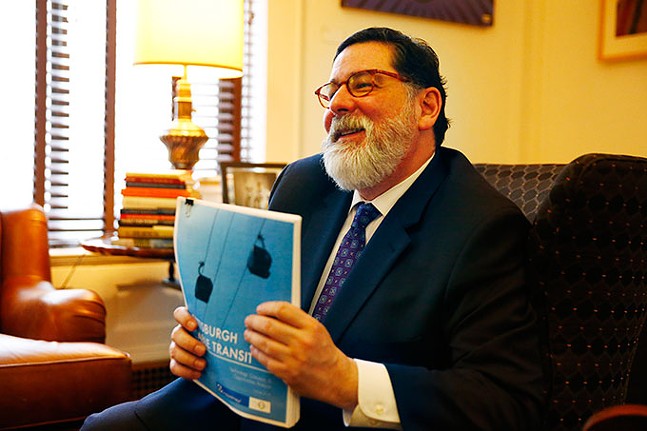 Somewhere in the middle of all this is Pittsburgh Mayor Bill Peduto.

In October, Peduto came out against the potential build-out of cracker plants and advocated for the region to wind down fracking. Natural-gas fracked from wells in Southwestern Pennsylvania is then sent to cracker plants, where it's processed into plastic pellets. A cracker plant is currently under construction in Beaver County, and is permitted to emit 2.2 million tons of carbon dioxide, the equivalent of adding more than 480,000 cars to the region.

Despite his opposition to future cracker plants, Peduto hasn’t joined the movement advocated by Lee and other politicians like U.S. Sens. and presidential candidates Bernie Sanders (I-Vermont) and Elizabeth Warren (D-Mass.) That wing of the Democratic Party is proposing the Green New Deal (GND), a plan that would provide large-scale federal investments to build renewable energy plants and upgrades to the nation’s electricity grid  as a way to move the U.S. off of dependency on fossil-fuels, like natural gas, by 2030.

Peduto’s rejection of the GND has perplexed some in Pittsburgh, and led to uncomfortable arguments on Twitter. Recently, Pittsburgh City Paper sat down with Peduto for an extended interview where he elaborates on why he isn’t backing the GND, and why he isn’t defending the fracking industry either.

One of Peduto's central criticisms of the Green New Deal is the fracking ban, specifically the timeline associated with it. (A fracking ban was not originally included in the GND, but was later added.) Initially, presidential candidates like Sanders and Warren were calling for a fracking ban on day one of their administrations. Sanders has since proposed a bill in the Senate that would institute a ban on fracking within five years.

Peduto says he supports the goals of the GND, but doesn’t agree with how it is proposed to be implemented by its biggest champions.

“It is hard for me to describe my position with the Green New Deal. It is in many ways a manifesto,” says Peduto. “It doesn’t call for any changes in laws or any new budgetary items. It spells out a plan of where we need to get to, and it does so in a way that I am supportive of what its goals are.”

In terms of a ban on fracking, Peduto says, “What I believe needs to happen is it can’t be an arbitrary number. It can’t be one day or five years, it needs to be based on the transition of jobs first, and then people transitioning into those jobs.”

The GND calls for a just transition for all workers and communities, and proponents like Sanders have emphasized a transition for workers currently in the fossil fuel industry.

But Peduto says those details about transitioning workers aren’t specific enough and is concerned that some labor leaders have not been part of the process. Without union members who currently work in the fossil-fuel industries at the table to draft the GND, Peduto is skeptical  about the plan’s ability to provide its proposed “just transition” for workers. Labor leaders have also expressed skepticism of the transition for its workers.

Pittsburgh never got a bailout or federal help when the steel industry collapsed in the 1980s. There was no “just transition” then and both the Carter and Reagan administrations refused to provide federal assistance for the steel industry. Steel corporations consolidated, resulting in the loss of tens of thousands of jobs in the region, and when President Ronald Reagan came to Pittsburgh in 1983 to talk about retraining for laid off workers, he read a want-ad for a system program job and was derided.

However, some union leaders have endorsed the GND, like Association of Flight Attendants president Sarah Nelson, the Service Employees International Union, and the United Electrical Workers. But unions representing fossil-fuel workers have been less receptive. 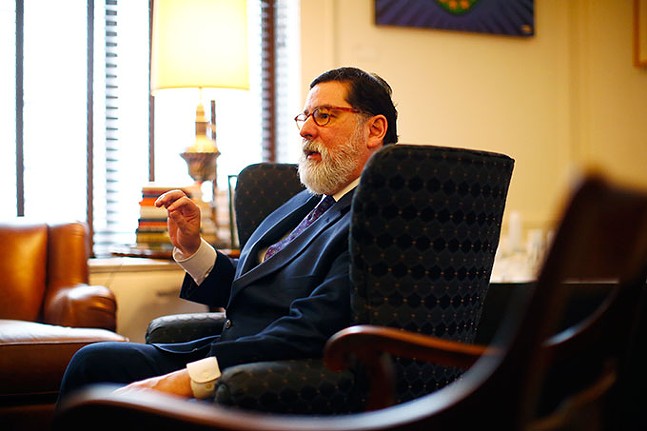 AFL-CIO president Richard Trumka said in April that his labor coalition wasn’t really part of the process, and said the AFL-CIO would want changes to the GND before supporting it.

Peduto says conversations around the GND need to address how to bring organized labor, especially fossil-fuel workers, and environmentalists together.

“How do we bring the Sierra Club and the Steelworkers together?” asks Peduto. “And how do we sit down and actually make that happen?”

Peduto has been part of efforts to do that in the past, like with the Blue-Green Alliance, which met in Pittsburgh last year in June. It’s also possible that specifics about how workers would transition away from certain fossil-fuel industries could materialize if/when the GND moves past being a resolution, and is instead proposed as a binding piece of legislation.

Another struggle to bring labor and environmentalists together is actually getting those fossil-fuel union members onto the Democratic side to begin with. While AFL-CIO and Steelworkers leadership has been adamantly anti-Trump, it’s been reported that Trump attracted many Steelworkers and trades union members in the Pittsburgh area to vote for him in 2016, even though Democratic presidential candidate Hillary Clinton was pro-fracking.

But Peduto says there is an opportunity, and it centers around making those just transition proposals more concrete. “Going back to [2016], we offered those workers nothing, we were going to teach them how to code,” says Peduto. “These are people who build America. We didn’t have to lose them.”

So far, Peduto has been reluctant to support any Democratic presidential candidate. He says he is leaning toward offering his endorsement to former South Bend, Ind., Mayor Pete Buttigieg or former New York City Mayor Mike Bloomberg, but he has conditions. He has sent letters to them both, asking them if they support a moratorium on new cracker plant development until their economic, environmental, and health-related impacts are fully studied, and if they pledge to invest first in communities that will see negative economic impacts with the withdrawal of fossil-fuel companies.

This is part of his proposal of what he calls the U.S. Marshall Plan, which is similar to the GND in that it provides jobs in renewable energy and clean manufacturing as a way to replace jobs in the fossil-fuel industry. Peduto says the U.S. Marshall Plan, which he first explained to Huffington Post in 2017, differs from the GND in that it puts more of an emphasis on providing incentives to private companies.

Peduto admits the GND also has proposals to incentivize private renewable enterprises, but says he disagrees with its embrace of public investment and public ownership to create and sustain jobs.

He doesn’t think the government should take over ownership of renewable energy structures, like when the New Deal and the Tennessee Valley Authority were created in the 1930s. He says this rhetoric and push for public-ownership takes away from the things he likes about the GND. Peduto would rather see a program focused on renewable energy and clean infrastructure jobs using a model similar to how municipalities receive Community Development Block Grants, which provide federal housing and development grants to communities that meet a certain percentage of low-income residents.

“There are some programs at the federal level, but there will probably be the need to create some new ones that are geographically based on the areas that have been dependent on fossil fuels,” says Peduto.

Peduto reiterates that he does support the goals of the GND and that its focus on environmental justice, workforce development, and human rights “enhances our target” of combating climate change and considering the human toll fossil-fuel industries have created.

But he disagrees with the way the GND is being interpreted. Peduto believes Buttigieg and Bloomberg may be open to his U.S. Marshall Plan proposal, and says that is why they are the only candidates he is considering for an endorsement.

He says he hasn’t reached out to other presidential candidates, like Sanders, Warren or former Vice President Joe Biden, because he believes their stances concerning western Pennsylvania’s fracking industry are already well-established. (Biden has come out enthusiastically pro-fracking and doesn’t support a ban.)

“For the most part, the positions of Sanders, Warren, and Biden are already known,” he says. “And I don’t know if they would be willing to change their positions to get a mayor of [300,000] people to endorse them.”

But with Sanders emerging as the likely front-runner in the Democratic Primary Election, and Warren and Biden still in good position in national polls, Peduto might want to get used to being stuck in the middle.