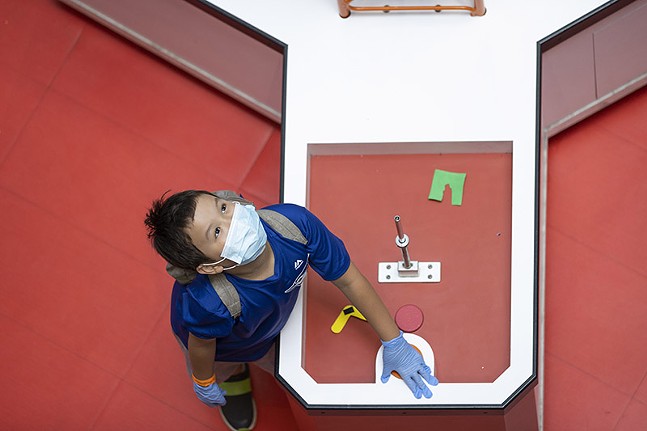 Photo: Courtesy of the Carnegie Science Center
Concerns over the spread of COVID-19 have halted concerts, community events, festivals, and other in-person activities for the foreseeable future. Makerspaces and DIY workshops are no exception, meaning these hubs of creativity and innovation, with their focus on hands-on learning and interaction, have had to adapt in response to the pandemic.

“The types of lessons we try to teach, the skillsets that we try to impart on students and teachers of problem-solving, of adapting, of iterating — we’ve now had to put our money where our mouth is and practice what we teach,” said Jon Doctorick, director of STEM Outreach at the Carnegie Science Center.

Doctorick runs the BNY Mellon FabLab in the SportsWorks building. The workshop focuses on digital fabrication — 3D printing, coding, computer-aided design, and other technology-aided skills. The FabLab also has several mobile units, which, before the pandemic, could be brought off-site to schools or corporate training events.

The Carnegie Science Center is open now at about 10% of its normal capacity and now offers timed entry. The FabLab isn’t open yet to the public, but it has been used over the past few weeks by in-person youth summer camps, with about four to six students taking part in each camp.

“There’s still plenty of space for social distancing to occur," says Doctorick.
"Masks are required by students, and we are having zero issues with students wearing masks and social distancing. We have sanitation policies in place where we clean equipment, temperature checks before coming into camp. … Honestly, I felt safer inside those camps than in some stores I visited in the last couple of weeks.”

A big part of any makerspace, whether it's aimed at adults or children, is its focus on community, which has had to change with restrictions on gatherings and concerns about safety indoors. When the pandemic hit, Prototype PGH, an Oakland makerspace that strives to build racial and gender equity in tech and entrepreneurship, moved its collaborative space into Slack and continued hosting workshops and classes online after closing its in-person space.

The topics of Prototype's workshops have pivoted, too — instead of physical manufacturing, they’re focused on online skills, as well as some additional job-search and resume workshops.

“How can we support people who want to learn new skills that are really tech- and web-focused as opposed to the more traditional manufacturing skills that we had been focusing on before?” says Erin Gatz, Prototype’s cofounder. Despite the shift, she feels that Prototype is “still, in essence, doing the same work” of helping marginalized creators and building a professional support network.

Assemble, a makerspace in Garfield that hosted a number of after-school programs for kids before the pandemic, moved its classes and summer camps online. They’re now hosting hour-and-a-half-long Google Hangout summer camp programs for children of varying ages, where participants get a take-home kit to follow along with during the class.

“We always try to put in extra stuff, so that it’s not like, ‘Oh, I only get 10 pom-poms?’” says Assemble executive director Nina Marie Barbuto. “Pom-poms may not be essential, but they’re little things that we can add so that kids can really start to share their creativity at home.”

The environment at Assemble has also changed — kids can’t just walk into the space anymore to hang out or have a snack. However, Barbuto emphasized that actually being in the space is not necessarily essential.

“Making can happen everywhere,” says Barbuto. “Makerspaces are great because they let you do things or afford you tools and space you might not have access to at home. But now you’re home! So it’s like, 'What are the little things that we can help folks do while they’re home?' Because making doesn’t have to happen in one space.”

Those makerspaces able to rearrange and limit their in-person capacity have reopened for members to return physically. Creation Labs, a small, one-man makerspace in the Galleria of Mt. Lebanon, has reopened and hosts small in-person classes for one or two people. Founder Aaron Hartman described the workshop as a sort of “makerspace-lite” focused mostly on technology-assisted work like 3-D modeling and printing, coding, robotics, and soldering.

The shop only recently opened up again in June, as its location inside a mall delayed the date it could open its doors. Despite the proportionally smaller turnout, Hartman is still seeing enthusiasm from members.

“People are eager to come in and get out of their house 'cause they’re going stir-crazy,” Hartman said. “And they love learning these skills.”

Protohaven, a makerspace in Wilkinsburg, has limited use of its shop to only current members and requires anyone who comes in to attend a mandatory COVID-19 orientation to learn about new policies and cleaning procedures. Protohaven had around 150 to 200 members before the pandemic, but around 70 have come in for a COVID-19 training.

“There are definitely a lot of measures in place. We don’t plan on opening fully to the public until we know it’s super safe and ready,” says Saige Baxter, Protohaven’s community coordinator. “We haven’t even reached our full 25-member capacity over five weeks.”

Before it reopened more broadly, Protohaven supplied fabric to around 300 volunteers working through Maskmakers PGH to make masks in their homes. Members of the workshop also designed plans for a face shield and mask — the “Proto Shield” and the “Ally mask” — the designs for which are published on the workshop’s website. Over 7,000 masks and 4,000 face shields were made.

“We’ll always be a collaborative space,” Baxter said. “Social distanced or not, you can still talk to people and I encourage that in the orientation. Keep your distance, wear your masks, and be safe, but say hello!”

Makers at HackPGH, another smaller workshop uptown, were also putting together PPE back in April during the red and yellow phase, distributing over 150 items to local hospitals. The space is now open for existing members only, with a maximum of 12 people each day by reservation.

But with the limited capacity, funding has become an issue. HackPGH lost more than half of its members in the course of a month, going from over 100 members to less than 50.

“I won’t lie, we are struggling," says HackPGH acting president Becky Zajdel. "We’ve looked into fundraising opportunities, but it’s difficult. Who are we to do a fundraiser when people are losing wages and jobs?”

Zajdel adds that one of the biggest losses is the sense of community. "People came to HackPGH to hang out and to get new ideas to learn from each other and that’s gone because they can’t just show up anymore.”

The organization is currently operating at a loss and has only a few months of funding left. Zajdel is currently applying for grants and some members are looking for donations. The workshop is looking into reopening membership applications and holding small in-person and online classes as well to gather funds.

“Hack is my family. Every board member will tell you," says Zajdel. "That’s why we do it. Every time there’s a squabble, every time there’s a fight over a tool, we grin and bear it, because this is our family and we care a lot about it.”