“Oh, I watched so much horror,” says Barbee-Turner.

She adds that throughout the 78-card deck – which is now available for pre-order at the KI11ERPANCAKE website – there are clear references to movies ranging from classics like Halloween, The Exorcist, and Texas Chain Saw Massacre, to more recent titles like Mandy, The Witch, and Jordan Peele's Us. There are also unexpected nods to the young adult, supernatural romance trilogy, Twilight, The Craft, and the horror-comedy Evil Dead 2, as well as the witchy Netflix series The Chilling Adventures of Sabrina.

CULT can be used like any tarot deck, where the reader lays out spreads to answer questions or seek guidance. Barbee-Turner says each suit incorporates some kind of horror-related imagery; the suit of wands are devils, cups are vampires, swords are ghosts, possessions, and zombies, and coins are witches.

But CULT is more than just an homage to a genre defined by surface-level scares and subversive social commentary. The KI11ERPANCAKE website describes CULT as a “tarot deck about anxiety, queer love, horror, and the societal construct that is gender told through the human figure,” and Barbee-Turner expands on this idea by describing how shifting ideas about gender and sexuality can both fascinate and terrify people.

“As more people come forward and say, 'Don’t assume my sexuality or gender,' we are entering into a time of change,” says Barbee-Turner, who identifies as queer. “Change is uncomfortable, especially when it heralds growth and horror has always been used to explore that discomfort. How does the real me fit into this world? How do I navigate a world that terrifies me?”

Genevieve Barbee-Turner/KI11ERPANCAKE
Self-portrait of Barbee-Turner as the CULT Fool card
To that end, the monsters in her deck become metaphors for the feelings and reactions associated with adjusting to a new world. Some are negative (the devils and vampires represent rage and fear of the other), while different cards are more positive, with witches and covens representing the benefits of community.

Some of her inspiration also came from personal experience. Before the pandemic set in, Barbee-Turner began reconnecting with the live-figure drawing scene in Pittsburgh and would receive mixed reactions from models when she asked about their preferred pronouns.

“Most people really appreciate it but there is still a persistent belief that 'genitals dictate gender,' and the question can create discomfort and confusion for some,” says Barbee-Turner. “It’s a similar reaction when someone assumes I am straight and I make a subtle correction. The awakening comes with time — it’s not about condemning anyone.”

Barbee-Turner had created two previous decks, Bridge Witches and Lost River, but calls CULT her “most personal deck to date.”

She also cites the influence of Alice Lowe, a British actor, writer, and comedian who performed while pregnant in Prevenge, a 2016 slasher comedy she also wrote and directed.

“The story of her writing, directing, and starring in that film — even having her newborn as her little co-star — is incredibly motivating,” says Barbee-Turner. “That movie is so weird and I relate to that on a near-spiritual level.”

While she used the deck to explore gender and sexuality, Barbee-Turner wants readers to feel free to interpret it based on their own experiences and perspectives.

“If someone wants to take these cards and recognizes something that is different from my intent, go for it,” she says “Tarot for me is a tool to relax your brain and think through a problem. It’s no different than taking a shower, going on a walk, or doing a guided meditation. Take these cards and make your own story.”

Barbee-Turner is now offering 100 first-run CULT decks for pre-order. Each deck is $60 and comes with a digital PDF guide. 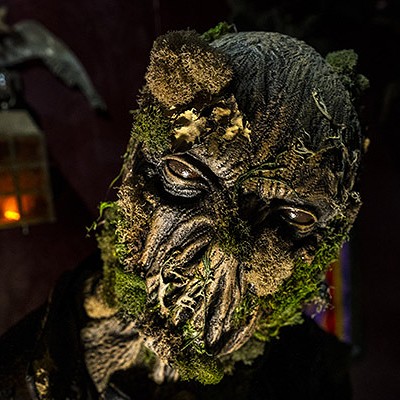