Pittsburgh loves its NFL players, but its NFL coaches are pretty good, too 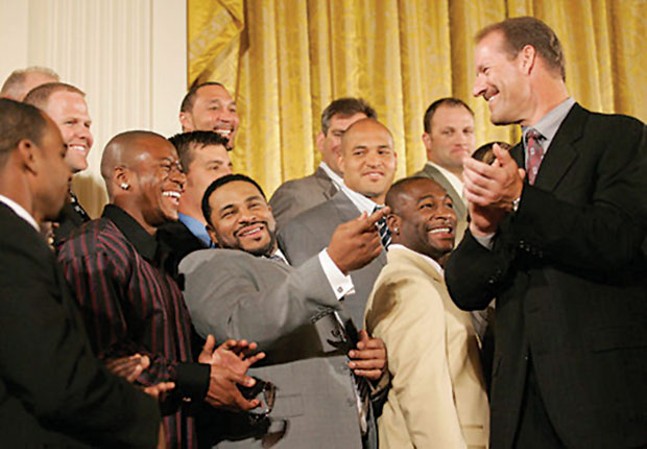 Pittsburgh football fans have always loved the local players who made it to the big time. But we’ve also had our share of good coaches. Granted, the list isn’t as spectacular as the player list, but it does include two head coaches who are in the top 10 of all time in wins, and three who have won a Super Bowl. So let’s take a look at the local top 10.

Bud Carson. If the category were best defensive coordinator, the Brackenridge native and designer of the “Steel Curtain” would’ve been at the top. After one winning season in Cleveland, his “Dawgs” stumbled out of the gate the next season at 2-7, so the Browns fired the legend. This was just a few years before the geniuses that run the operation found a reason to fire Bill Belichick, too.

Joe Walton. The father of Robert Morris University football was also an underrated athlete. Walton coached for the New York Jets during the ’80s, and had a 53-57-1 record. The perennially losing Jets even appeared in the postseason twice during Walton’s reign. The Beaver Falls native is also beloved at Pitt, where he played in two major bowl games for the Panthers, in 1955 and 1956. He also caught 28 touchdowns in the NFL. That’s a pretty good football life.

Joe Schmidt. Maybe the greatest Detroit Lion this side of Barry Sanders or Bobby Layne. Schmidt has his number retired at Pitt and with the Lions. The Brentwood native also is in both the Pro Football Hall of Fame and the College Football Hall. Plus, he did a little coaching. He took over as the leader of the Lions at the age of 34 and from 1967-72 compiled a 43-34-7 record. That wasn’t good enough for the Lions, who really haven’t had a better coach since.

Dave Wannstedt. The Baldwin Highlander had the very unenviable task of replacing Mike Ditka in Chicago. He was like Ronnie James Dio taking over for Sabbath after Ozzy was gone. That’s a tough crowd to win over. He then took over for Jimmy Johnson in Miami and along the way went 85-89, including a 1-2 record in the postseason. He then went back to Pitt as head coach, but couldn’t live up to Pitt’s unrealistic expectations either.

Marvin Lewis. The greatest coach in modern Cincinnati Bengals history despite never winning a game in the playoffs. That’s seven losses for the McDonald native in seven tries. Lewis has a 118-103 record overall and has put together a few really good teams. Lewis has been handling Cincinnati since the beginning of the Iraq War, in 2003. He’s had about the same success rate, however.

Chuck Knox. The former Quaker Valley star was the son of a steel-driving man. Players affectionately called the generous Knox “Dolemite,” in the 1970s for his ability to relate to minority players. After working under Joe Schmidt in Detroit, Knox went to Los Angeles and led the Rams to five straight division titles. His teams never made the Super Bowl, as the Minnesota Vikings knocked them out twice. He went on to coach Buffalo and Seattle before returning for one more year in L.A. to coach a young running back named Jerome Bettis. Along the way, Knox tallied 186 victories; only nine NFL coaches have won more games.

Marty Schottenheimer is one of them. Marty’s 200 wins rank him seventh on the all-time list. The reason he’s not higher on this list is the postseason. Maybe it’s fair, maybe it’s not, but winning hardware is usually what counts. Schottenheimer almost took the Browns and the Chiefs to the Super Bowl, so he should get credit for just getting close. He went to the same Fort Cherry High School that Marvin Lewis attended. Those two guys from a tiny little town accumulated 318 regular-season wins, but have gone 5-20 combined in the playoffs.

Mike Ditka. The only reason he’s higher than Marty is because Coach Ditka once did the Super Bowl Shuffle. He also led the legendary 1985 Chicago Bears team to the franchise’s only Super Bowl win. The Aliquippa tough guy went 121-95 in the NFL, including a less successful stint with the Saints.

Mike McCarthy. At this rate, McCarthy will be No. 1 in a few years. He’s already won a Super Bowl, much to the dismay of the Steelers faithful in 2010. In 11 years at Lambeau, McCarthy has had only one losing season and has won the NFC North six times.

Bill Cowher. Bill Cowher is so good that some Mike Tomlin detractors give him credit for winning two Super Bowls — one on his own and Tomlin’s first Super Bowl, won with “Cowher’s players,” two years after Cowher left. But, until that flimsy conspiracy is proven, it’s only one world-title win. The Crafton Chin accumulated 161 wins in the NFL, including the Big One. In 2005, Cowher mercifully ended the Steelers 26-year Lombardi drought.