Featuring an always-smiling WQED celebrity who made it into not one, but two stories 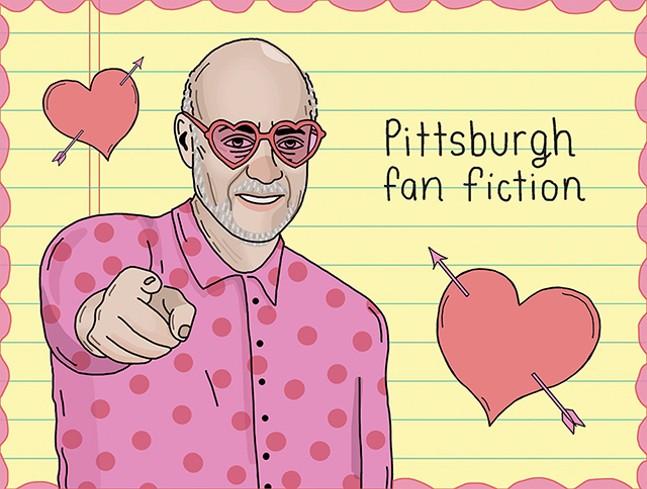 CP Illustration: Xiola Jensen
Pick any well-known figure in pop culture, and there’s sure to be fan fiction written about them. The genre has grown in popularity so much over the years that it’s branched from stories about fictional characters to include “real person fiction,” with fans writing stories about celebrities and public figures they admire.

For this year’s Valentine’s Day Issue, we put out a call for readers to pen stories about their favorite Pittsburgh personalities. On the following pages, you’ll read an ode to our beloved cover model; an always smiling WQED celebrity who made it into not one, but two stories; a popular chef whose food is so delicious, the writer penned a futuristic love story about an imaginary restaurant; a romantic script to the city itself; and one story, well, let’s just say it’s a love letter to every single woman in Pittsburgh. (You’ll see what I mean.)

My fanfic? I’m picturing all of our readers, lying in a bed full of City Papers, dressed only in the tattoos of transferred newsprint ink, whispering, “I can’t believe I get to read this incredible paper every week for free. Print media is alive! Aliveeeeeeeeeee!”

Hey, fan fiction is fantasy, after all.


The winners of our Pittsburgh FanFic contest:


• Hurt in an accident

• An Evening at Armand’s

• Late Night at the Pittsburgh Post-Gazette

*All of the submissions are fictional pieces submitted by our readers. They do not reflect the viewpoints of Pittsburgh City Paper.