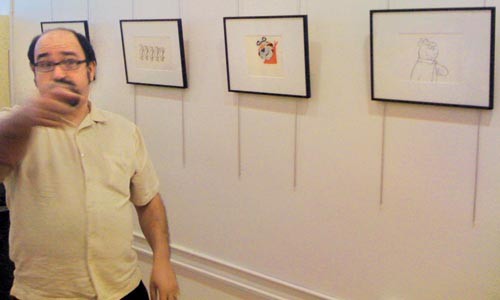 From the germ of an idea inside Joe Wos' head to a hallway at the Children's Museum to a little space all its own Downtown, the Toonseum has come a long way.

"It takes 20 years to become an overnight success," Toonseum executive director Wos said recently, as he scrambled to prepare the space on Liberty Avenue for its Nov. 12 opening party.

It's a narrow space, about 1,000 square feet. But that, Wos says, is about five times the room the museum had in its previous home.

The Toonseum celebrates animation and cartoons. Wos, a native of Braddock, has been a cartoonist since age 14. He later traveled the country, visiting museums drawing and storytelling for kids. After a stint as the artist-in-residence at the Charles M. Schulz Museum -- a Santa Rosa, Calif. center devoted to the Peanuts creator's mission and art --Wos returned home with the idea for a cartoon museum in Pittsburgh.

He approached the Children's Museum, where he'd long performed, and for about a year set up shop in a hallway in the North Side museum. Wos and the Toonseum board decided to expand, and the Pittsburgh Cultural Trust and Grable Foundation stepped in.

"We jumped at the opportunity," Wos says. "This is the gateway to the Cultural District, across from the August Wilson Center."

Leaving the Children's Museum also means the Toonseum can delve into somewhat more mature material. An exhibit about The Montgomery Story, a comic about the civil-rights movement, previously proved too edgy, for instance. Even Santa Claus -- who is merely a character to toon types -- violated the Children's Museum's strictly secular policy.

"We pushed our luck with Zippy the Pinhead," Wos says. "You're not going to see any R. Crumb at the Children's Museum."

The newly situated Toonseum kicks off with an exhibit focusing on animation, with "everything from Gertie the Dinosaur to SpongeBob," Wos says. Next September, the guest will be Patrick McDonnell, creator of daily newspaper comic Mutts. "We wanted to do something to celebrate cartoon dogs."

While Wos contends that cave drawings were the original cartoons (an assertion paleontologists might dispute), he says comics art is coming into its own.

"It's getting the recognition it deserves," he says. "It is literature. Graphic novels--now that's something you can call it, rather than a comic book.

"Sandman and Watchmen really transformed things for a lot of people," he adds. "It wasn't until the advent of 'Saturday morning' that animation became for children."

And for, well, nerds. The Toonseum, for instance, has had a presence at big-name conventions like Anthrocon and Tekkoshocon.

But the museum welcomes visitors who haven't strapped on a tail.

"We are all Mickey Mouse, we are all SpongeBob," Wos says. "We identify with Charlie Brown, and we're Lucy.