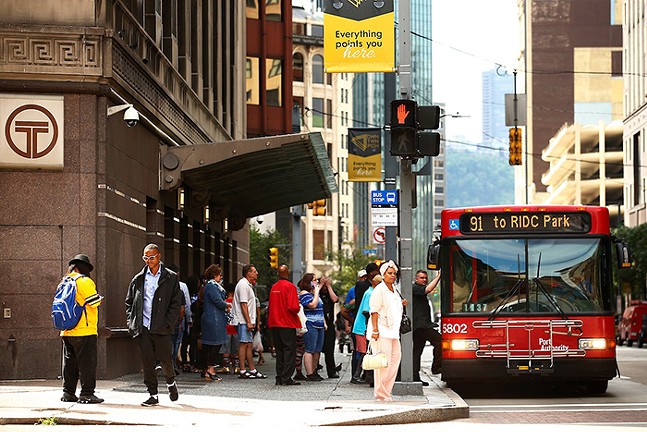 CP photo: Jared Wickerham
People wait for a Port Authority of Allegheny County bus in Downtown Pittsburgh
Everyone complains about traffic or long commutes, but Pittsburghers might have the least to complain about. Not only do Pittsburgh drivers travel relatively short distances for work, new data is showing that Pittsburgh-area transit users have some of the shortest commutes in the country, both in distance and time.

Miami riders had the highest 2020 average commute times at 58 minutes.

Screenshot taken from moovit.com
The data also appears to confirm trends that advocates like Pittsburghers for Public Transit were concerned about during the coronavirus pandemic. Between 2019 and 2020, average travel distance decreased, and transfers increased, while single line trips decreased. Early in the pandemic, PPT argued that service cuts that came before federal relief arrived should target lines that likely had a high amount of commuters who were now working remotely, like the light-rail lines to the South Hills.

The Moovit data appears to back up that those long-distance, single ride lines have been getting less use, while other bus riders who still have to work service jobs and other employment that doesn’t offer remote work have been disproportionately impacted by service cuts.

Overall though, the Moovit data appears to back up the notion of Pittsburgh as an underrated public transit region, and one that is poised for transit growth thanks to its short commutes. In 2020, Pittsburgh transit users walked an average of 0.34 miles from the start to the end of the trip, and during transfers. This is tied for the lowest with New York City.

Pittsburghers live close to transit and those transit commutes are relatively short. Transit experts have argued it would behoove city and county planners to take advantage of those realities, and allow for and encourage denser development near high-frequency transit, as well as increasing frequency on many of the region’s popular transit lines.

In 2018, transit expert Jarrett Walker, who has redesigned bus networks for cities across the globe, told Pittsburgh City Paper that housing development near busways in Pittsburgh could be much greater than it is now.

According to Moovit, this is Pittsburgh transit users' number one ask too. Pittsburgh transit riders' top two aspects that would encourage them to use public transit more often include “Accurate and reliable arrival times according to the published schedule” (13% of riders put this as top priority) and “Higher frequency of public transit vehicles/shorter waiting times at stations” (11% of riders put this as top priority). Parking for cars, on the other hand, is much less of a concern. Only 3.2% of riders said their top priority is “Convenient parking areas near stations for car owner.”