Pittsburgh Left: Wouldn’t it be great if Donald Trump helped the world’s children before they were killed | Opinion | Pittsburgh | Pittsburgh City Paper

Pittsburgh Left: Wouldn’t it be great if Donald Trump helped the world’s children before they were killed

If Donald Trump actually cared about Syrian children, he wouldn’t block them from entering this country in the first place 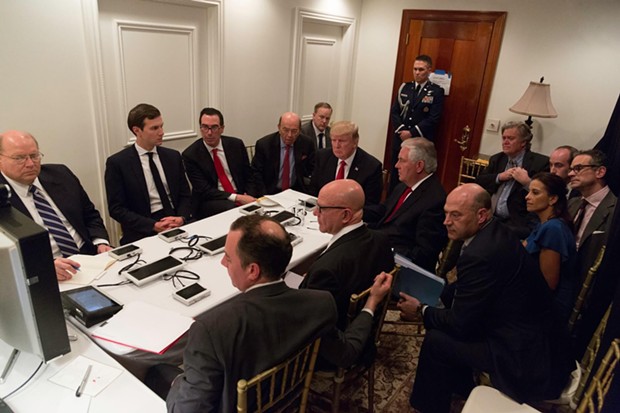 White House Photo
President Donald Trump receives a briefing on a military strike on Syria from his National Security team on April 6.

Donald Trump’s motivation in ordering a missile strike against Syria last week has me baffled a bit.

Don’t get me wrong, I understand the timing. The attack came after Syrian President Bashar al-Assad killed and wounded hundreds of his own citizens by using chemical weapons. In fact, President Obama mulled over military action during his presidency — and by now, of course, you’ve already heard how Trump solidly opposed Obama taking action against Syria.

The missile strike is a strange step for Trump, a man who has pledged “America first.” He’s spent most of his three months in office, in fact, pissing off and alienating our allies. So just about the time he’s pushing hard for America’s isolation from the rest of the world, he takes the first steps in starting a war with Syria, and probably Russia. There was no diplomacy, no conversation, just missiles in the air. The president felt Syria’s aggression warranted aggression in return.

In justifying the strike, Trump talked about the victims of the chemical-weapons attack: “Even beautiful babies were cruelly murdered in this very barbaric attack. No child of God should ever suffer such horror.”

Herein lies the bone I’d like to pick. This military action comes as a surprise because no military aggression was perpetrated against the U.S. or its citizenry. I’ve listened to Republicans for years yell that the United States shouldn’t undertake any military operation unless we were attacked. I don’t agree with this. I think it’s the United States’ job, both alone and as a member of the U.N., to help those around the world who need it. I don’t support war and I generally despise the bombing of anyone. But intervention doesn’t have to involve drones and cruise missiles. There are many other steps to consider first.

I abhor what happened in Syria and I support the U.S. getting involved. Airstrikes seem severe at this point. But I read Trump’s statement and I start to think, “Maybe he was truly moved by the scene of suffering and murdered children.” But then I look at the evidence and I can come to only one conclusion: Trump’s bombing of Syrian targets was probably just another unhinged, knee-jerk reaction to a situation that he thought he needed to act on.

First, if Donald Trump actually cared about Syrian children, he wouldn’t block them from entering this country in the first place. In January, he proposed banning Syrian refugees from entering the U.S. He also wants to eliminate or seriously reduce aid to Syria and other countries. So he blocks them from entering the U.S., reduces aid and instead sends cruise missiles. Trump’s U.N. ambassador, Nikki Haley, called the missile strike “compassionate.” Compassion, really? Wouldn’t the compassionate thing be to give those refugees safe harbor here?

Second, horrible things are being done to beautiful babies all over this world. And not just babies, but toddlers, tweens, teens, young adults, twentysomethings, thirtysomethings and on and on. But the fact is, Syria is front and center right now, so that’s where he’s focused.

What about the people of the South Sudan? Ethnic violence there is overwhelming. In the past few days, 6,000 people fled the country for Uganda because of increased fighting. An epic level of sexual violence against women and girls in that country continues daily.

Or what about the children forced to live in gang-controlled cities across Central America? Teens and small children, hoping to escape violence, have left home and headed north, where many are forced to join gangs. While the U.S. under the Obama administration welcomed these immigrants, the borders are now closed to these people thanks to Trump’s January order. And let’s not forget the people just south of our border in Mexico, who live in poverty and deal with violence in places like Mexico City.

So if I’m being honest, no, I don’t give Donald Trump points for compassion just because he called for an air attack in Syria. It was literally the easiest thing that he could do without actually doing anything to help the people of that country. What Donald Trump needs to do is get this country active again in helping people before they have to die.