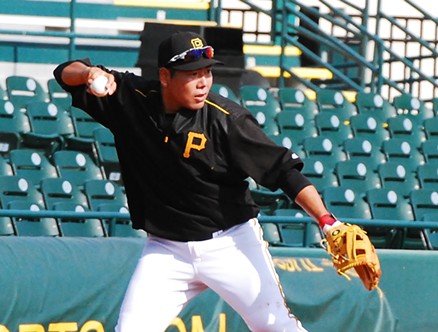 Photo by Charlie Deitch
Jung Ho Kang
I'm not sure why we're a society that feels the need to take sides. It's either "X" or "Y" all the time; a lot of times there are no exceptions.

A lot of us do that in politics and virtually all of us do it when it comes to our sports teams. We have to pick sides, often before all the facts are in to make an informed opinion.

I am normally a strong proponent of doing this, especially in cases of serious crime. Is so-and-so guilty of murder or tax fraud? Maybe, maybe not. But they always should have the presumption of innocence until their guilt is proven. Again, I agree with this 90 percent of the time. My main exception to this rule is in sexual-assault cases. A finer subsection of that would be sexual assault and abuse cases involving public figures like actors, athletes and even public officials (including police officers).

I'm going to own up front to the fact that this is at least slightly hypocritical; it's probably very hypocritical, but I can't help it. We have in this country such a history of victim-blaming, so called "slut-shaming" and putting the victim on trial, that I decided long ago to always give the benefit of the doubt (as much as it should apply in these cases) to the accuser. Why? Well, if we're supposed to give the accused a presumption of innocence, shouldn't we also give the alleged victim at the very least a presumption of honesty? It seems like a no-brainer to me, especially in cases involving celebrities.

People are so quick to jump to the celebrity's side or show them sympathy in some way. In other cases, the focus is taken completely off the case at hand and applied to trivial matters such as who's going to play third base tonight. This brings us around to the recent announcement of a sexual-assault investigation against Pittsburgh Pirates infielder Jung Ho Kang. A Chicago woman is accusing the South Korean-born major-leaguer of drugging her drink and then sexually assaulting her.

When told of the investigation, one acquaintance of mine said: "Oh, I hope it's not true. I like him so much and he's been good for the team." To that, another friend replied: "Well, I hope it's not true because that means another woman was sexually assaulted." Sides are already being chosen; I guess it's natural that it should happen and, to be honest, I've already done that myself.

I don't know for sure whether Kang is guilty of these horrible allegations. But what I know is, a woman says she was sexually assaulted. In these cases, the victim's word deserves our unquestioned support. I've never said, "Let's see how this one plays out" in other cases of this nature. My natural inclination, as should all of ours be, is to support the victim. My mind doesn't change just because the accused is a famous baseball player who has helped my team and up until this point seemed like a great guy and positive member of the community. But even though these are just allegations, when you're dealing with sexual assault, it's different; it has to be. It's traumatic, and seeing her alleged attacker in the news everyday must be so upsetting and unsettling.

I recalled this case from a couple years ago when two star football players sexually assaulted a fellow student. While they were later convicted, the pair was championed by the community, and the school refused to enforce an order of protection. The school even refused to waive the fees so she could simply move to another school. There are some similarities here if we choose to see them.

There are some who don't believe anything should be done to Kang until the case is adjudicated, or at the very least until charges are levied. Paul Zeise, a sports writer for the Pittsburgh Post-Gazette and a host on sports talk 93.7 The Fan, is one of them. In a July 6 column, Zeise wrote:

We don’t know what happened, and we don’t know what the truth is. Until the police uncover enough evidence to charge Kang, we shouldn’t try to guess either. And neither should the Pirates, Major League Baseball or any sports league, for that matter.

The standard should be simple: Unless there are charges filed in any of these cases, there shouldn’t be a suspension of any type."

I totally get this line of thinking. I agree with it in most instances, but these kinds of cases are different. First, the "we don't know what the truth is" has long been a contentious statement in rape and sexual-assault cases. This is a violent crime of violation and as such deserve to be handled differently. I agree that there shouldn't be a rush to judgement here, but that also has to apply to the victim. She should be allowed to live by the same standards, and in high-profile cases like this, the victims aren't always extended this same latitude.

I'm not saying we run Kang out of town. But why not sit him down with pay until the investigation is complete? In that instance, he doesn't suffer financially and the victim perhaps gets some relief from seeing her alleged attacker in the public eye. I honestly see this as a no-brainer and a valid compromise. The push back will come, however, because the Pirates would greatly feel the loss of Kang. The team could suffer. The fans would be mad, but that's too damn bad. A compromise isn't meant to make everyone completely happy. This is a way to let all parties keep some level of dignity and benefit of the doubt while Chicago Police finish this investigation.

I interviewed Kang prior to the season and he seemed like a good guy and good teammate in the 15 minutes I spent with him. And because of that, there is always the inclination to side with the celebrity. But there are two sides to these allegations, and just because the accuser isn't a top-shelf third baseman for the Pittsburgh Pirates doesn't mean she shouldn't be given the same benefit of the doubt than her alleged attacker.