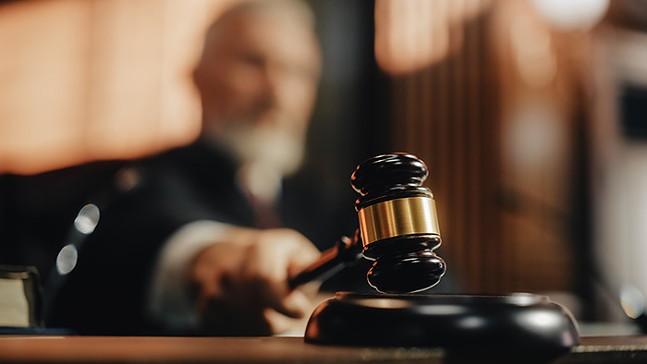 The Pennsylvania Supreme Court traveled to Pittsburgh this week to hear oral arguments on a number of cases, including one that the appellants’ lawyers say is the first of its kind nationally.

The case, Scott v. Pennsylvania Board of Probation and Parole, involves four people who were convicted of felony-murder in their late teens or early 20s, and have each spent between 24 and 48 years in prison. They are being represented by the Pittsburgh-based advocacy group Abolitionist Law Center, the Amistad Law Project, and the Center for Constitutional Rights. The appellants filed suit against Pennsylvania’s parole board in July 2020, suing for permission to apply for parole, an opportunity denied to them by the state's felony-murder rule.

"People in Pennsylvania who are serving life sentences do not have the possibility of parole," says Bret Grote, who argued on behalf of the appellants on April 13, "and the only way they are being removed from prison in the overwhelming majority of the cases is in a body bag."

Pennsylvania is one of more than 40 states with a felony-murder law. If a death occurs while a felony is being committed, participants in the felony can be charged with murder — even if they played no direct role in the death and didn't intend or anticipate it. There are more than 1,000 people in Pennsylvania serving Life Without Parole for felony-murder.


The case turns on two questions. One is whether you can legally separate someone’s parole eligibility from the amount of time they are sentenced to serve. Is the “sentence” just the required length of imprisonment or does it necessarily include parole eligibility? The other is whether the Commonwealth Court, which dismissed the initial filing by saying they don’t have the jurisdiction to rule on sentences, was correct in their determination.

A Pa. felony-murder conviction comes with a mandatory sentence of Life Without Parole (LWOP), which appellants’ counsel refers to as unconstitutional “Death-By-Incarceration.” They argue that Pennsylvania’s LWOP sentence has two components from two different provisions of state law, a life sentence and a denial of parole eligibility. For this reason, they argue, the Commonwealth Court has the authority to restore parole eligibility to those serving LWOP without compromising the “life imprisonment” part of the sentence.

“Parole is a legal imprisonment,” said Bret Grote, legal director of ALC, in front of the court, arguing that someone paroled from a life sentence is still under government control. He classified parole eligibility as one of many “questions of penal administration and prison discipline that can be altered without disturbing the sentence that was imposed by the criminal court.”

“Life Without Parole is a common discursive linking,” Grote argued. “It’s thought of as a single concept in the way that it’s experienced by petitioners, but Life Without Parole is actually a construct that has two components,” he says, referring to the sentence imposed by the criminal court and a parole determination according to a separate provision of state law. For that reason, the appellants argue, they can legally challenge their parole eligibility without “disturb[ing] the finality of the judgment of a court.”

The state’s lawyer, Robert M. Eisenberg, says the state Supreme Court lacks jurisdiction in this case because denial of parole and a life sentence are one and the same. “Pennsylvania law clearly says that life imprisonment in and of itself precludes parole,” he argues. For this reason, he argues, the appellants’ suit challenges their sentences and must follow the procedures of the Post-Conviction Relief Act (PCRA).

“Because [parole eligibility] is part of the sentence, it can be challenged by the PCRA and only the PCRA,” he says.

Grote contends that the PCRA cannot adequately provide relief for the appellants, due to procedural details.

Eisenberg argues that the Parole Code stipulates that the board has no power to even consider parole until the minimum sentence has been served. Since a LWOP sentence lacks a minimum (or, its minimum and maximum are the same), people serving those sentences are definitively ineligible for parole. If you challenge the lack of a minimum sentence on a life sentence, you would be challenging the sentence itself, Eisenberg maintains, which must be done through the PCRA.

In a press release distributed by the appellants’ counsel after the conclusion of oral arguments on April 13, the appellants’ counsel argues that “Pennsylvania’s Death-By-Incarceration sentencing scheme both reflects and exacerbates the racial disparities in the state’s criminal justice and penal systems,” noting that Black Pennsylvanians make up about 70% of people serving LWOP, despite being only 11% of the state’s population.

“Overall in the state, Black people are sentenced to Death By Incarceration at a rate 18 times higher, and Latinx people at a rate five times higher, than white people,” the release says.

“This case is on behalf of Black elders and all of those who have been denied redemption,” said Samah Sisay, attorney and Bertha Justice Fellow at the Center for Constitutional Rights. “Through its mandatory sentencing scheme and an inability to seek parole, Pennsylvania has disproportionately and unconstitutionally denied rehabilitation for people of color, and we are asking the court to right this grave error.”