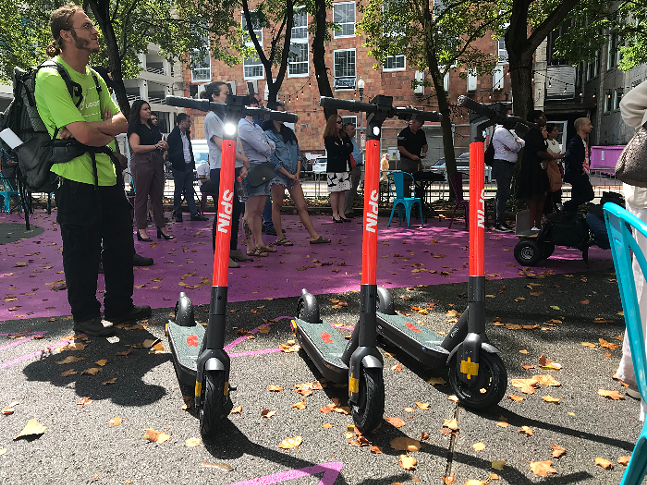 CP Photo: Ryan Deto
Spin e-scooters
On Fri., July 9, Pittsburgh officials announced a new pilot program that aims to provide people without cars better options to get where they need to go, whether via public transit, mopeds, bike share, or e-scooters. The initiative is called Move PGH and it provides in-person “mobility hubs” that aim to make multi-modal travel in the city easy and convenient for people without smartphones by providing them access to buses, bike share, e-scooters, and mopeds all at kiosks located throughout the city of Pittsburgh.

Eventually, people should be able to pay for and locate Port Authority public transit, Healthy Ride Bike Share, Scoobi mopeds, and Spin e-scooters all on the Transit App within Pittsburgh. Healthy Ride bike share will also soon include electric-assist bikes, aka e-bikes. The goal is to provide “last mile” connections for people who don’t have access to cars. In Pittsburgh, about 25% of automotive trips are less than a mile long.

Pittsburgh Mayor Bill Peduto said the initiative is the first of its kind in the U.S. in bringing together several different mobility providers.

"Transportation mobility is key to economic mobility and a major determinant in household health, education, and welfare,” said Peduto in a press release. “In Pittsburgh, too many residents are one missed bus or one flat tire away from losing their job or missing a critical appointment.”

E-scooter share begins on July 9 and the scooters are allowed on streets, bike lanes, and trails throughout the city. Riding e-scooters on sidewalks is prohibited. Karina Ricks, director of the Pittsburgh’s Department of Mobility and Infrastructure, said that scooters should be parked on the street in parking spaces, and can also be parked near bike racks. E-Scooters can also be left at charging docks, which are located throughout the city, but this isn’t required.

Ricks says the motivation for this pilot program was to help people without access to cars better options to get around, and says offering bike share and e-scooters near major public transit stations can go a long way in providing transit users faster commutes.

“It’s a pilot, it’s a test, but we have a lot of belief that this can be a model for other cities,” said Ricks at a July 9 press conference.

David White, CEO of bike-share provider Healthy Ride, spoke about how convenient and well-designed the U.S. interstate highway system is, and how easy it is to use, even for first-time drivers. He said that Move PGH is an effort to make it as convenient as possible for people without cars to get around.

“We are at a point now where we want to do that for walking, biking, and scootering, and anything that doesn’t require a car,” said White.

For example, if your bus stop still leaves you half a mile short of your location, users can pick-up a bike share or scooter to finish the trip. (Healthy Ride offers free 15-minute rides for users who register their Port Authority ConnectCard.)

One of the biggest differences between what Pittsburgh is doing compared to other cities is the collaboration between private, public, and nonprofit entities. Many American cities with several non-car mobility options have companies and entities competing against each other. In Pittsburgh, all the mobility options are working together, and eventually will all be accessible on one app, the Transit App.

She said that 40,000 users currently use the Transit App in Pittsburgh, and 79% of them don’t have access to a car, more than one-third of them are low-income, and more than half of them are non-white.

The Move PGH initiative also includes a program to provide free transit and mobility services to 100 low-income individuals for six months. This Universal Basic Mobility pilot is being supported by the Manchester Citizens Corporation in the North Side, who will provide trip coaching to these individuals to teach them how to use e-scooters, bike share, public transit, etc.