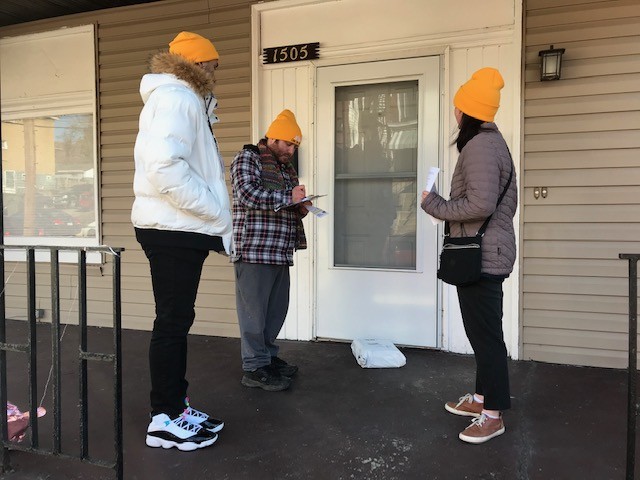 CP photo: Ryan Deto
Casa San Jose volunteers canvassing in Beechview on Feb. 22
Historically, minority groups in the U.S. are undercounted in the decennial U.S. Census. This is the only time the federal government officially attempts to count every resident in the nation, and undercounted populations are subsequently underserved and receive less federal aid.

Local Latino service group Casa San Jose is concerned about these discrepancies because most of their members fall into the category of populations that are undercounted, making it harder to provide services for them.

Last Saturday, about 60 volunteers with Casa San Jose took to the streets of Beechview to knock on 1,200 doors in hopes of informing as many residents as possible about the upcoming census.

Beechview and other nearby southern Pittsburgh neighborhoods are home to a small but growing Latino immigrant community.

Volunteers canvassed most to the northern half of Beechview on Feb. 22, passing out flyers in English and Spanish, and informing residents of the importance of filling out the census. The group is hoping to help immigrants, the elderly, people with disabilities, and people of color learn more about the Census. They also answered questions residents had about the census and clarified aspects that might be confusing.

In June 2019, the U.S. Supreme Court ruled against the Trump administration's attempt to place a question on the census that asked about immigration status. Many immigration advocates feared such a question would deter immigrants and Latinos from filling out the census in fear that federal immigration officials would use the data to deport immigrants.

But headlines still abounded about the Trump administration's attempt, and Perkins said part of the canvassing effort was to inform Pittsburgh immigrants that no citizenship question will be asked, and they should have no fear about being turned into to U.S. immigration officials because they filled out the census.

Perkins said that Casa San Jose also had to further inform area immigrants about the necessity of answering their doors and filling out the census, because many immigrants have been told to be skeptical of strangers knocking on their doors since they might be immigration officials conducting raids.

According to U.S. law, it’s not necessarily a deportable offense for undocumented immigrants without local criminal records to be present in America. Crossing the border illegally or having a visa expire while in America is a civil misdemeanor, not a criminal offense. Even so, immigration officials have detained many undocumented immigrants without criminal offenses, including some in Pittsburgh.

Perkins said many immigrants that have moved to Pittsburgh in the last 10 years have moved from neighborhood to neighborhood. Though some are concentrated in Beechview, many others live all over the city and region, making it harder to be counted.

“So the Latinos that are counted probably speak English, and are fairly stable,” said Perkins. “And often the Latinos left out are the ones with the highest need and the lowest income. And it’s not just Latinos, immigrants and refugees are undercounted as a whole.”