Pittsburgh is one of the best regions to live car-free in the U.S. 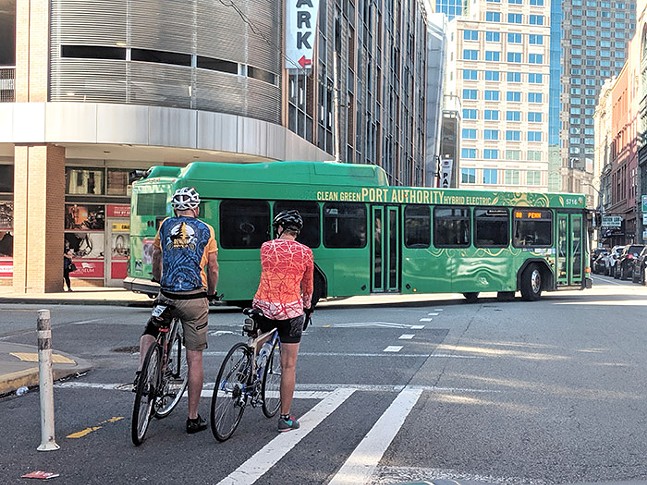 CP photo: Lisa Cunningham
The bike lane on Penn Avenue
Pittsburgh drivers constantly decry traffic from the Squirrel Hill Tunnel or commuting home on Route 28, but some new data shows that the region is actually a pretty good place to avoid traffic, and driving a car altogether, if Pittsburghers so choose.

According to a recent City Lab article that measured each metro area in the U.S. by how amenable they are to living without owning a car, Pittsburgh was ranked 11th out of areas with more than 1 million people.

Richard Florida of City Lab, who wrote the report, says Pittsburgh ranks in the top 10 percent of all 382 metro areas studied. This included very small metros, like college towns, that are much more friendly to car-free living than the average big city metro area.

Where are the best American metros for living car-free?

Let us introduce the Metro Car-Free Index, developed by @Richard_Florida and Charlotta Mellander. The map by @dhmontgomery shows the big picture. Read the article for more detailed information: https://t.co/wh6P9ePzJQ pic.twitter.com/1SXu413MVW

In terms of comparable big city metros, Pittsburgh ranks high at 37 overall. Cleveland is ranked at 76, and Cincinnati is ranked 156. Milwaukee (43), Buffalo (51), and Baltimore (55) are also close to Pittsburgh, but they are still bested by the Steel City. The Pittsburgh metro includes Armstrong, Allegheny, Beaver, Butler, Fayette, Washington, and Westmoreland counties.

In terms of large metros, Pittsburgh is only bested mostly by much larger regions, like the San Francisco Bay Area, Boston, New York City, Philadelphia, and Washington, D.C. The only large metro area that has a similar population to Pittsburgh and has a better car-free metric is New Orleans, which is ranked 34th overall.  Pittsburgh still has a way to go to catch up to other regions like NYC and San Francisco, but comparatively to all regions in the U.S., it is punching above its weight.

“I think Pittsburgh’s relatively high ranking is due to the fact that a relatively large share of its workforce works Downtown or in Oakland,” says Florida, who used to teach at Carnegie Mellon University. “Whereas in other places, the workforce is more spread out.”

The high concentration of jobs in Downtown and Oakland has been cited by transit experts like Christof Spieler as to why the Pittsburgh region has great potential to increase its public transit ridership. And according to last year’s ridership figures from the Port Authority of Allegheny County, ridership also went up last year, bucking the declining national trend.

It should still be noted that people in Pittsburgh still overwhelmingly get around by personal vehicle. Florida notes that 5.5 percent of commuters in the Pittsburgh region take transit, 3.4 percent walk to work, and 0.4 percent bike. Bike commuters, particularly in the city of Pittsburgh, have been increasing for the last few years. Florida says that 4 percent of Pittsburgh-area residents do not have their own vehicle.

Other data also shows Pittsburgh’s car-free ranking has the potential to increase. A recent report from INRIX shows 23 percent of car trips in the city of Pittsburgh are less than 1 mile, the second highest of any large city in the country.

In Pittsburgh, 23% of car trips are less than 1 mile, and 50% are less than 3 miles.
Within a 1-mile/10-min bike ride from home, I can reach all or most of Highland Park, Morningside, East Liberty, Garfield, Friendship, Shadyside, Bloomfield, and Larimer. pic.twitter.com/FfURyolysb