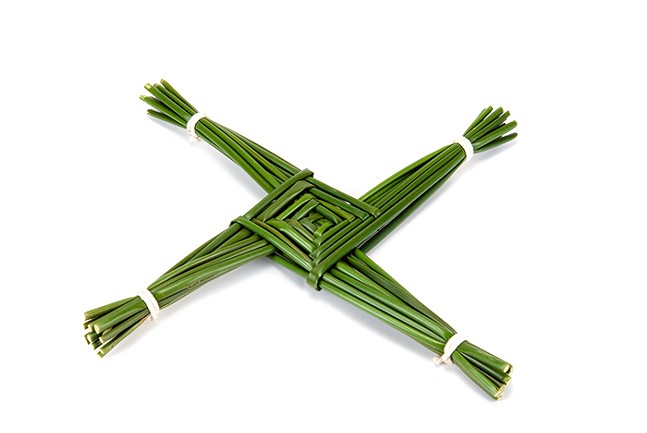 Brigid's Cross
Americans are familiar with St. Patrick, Ireland's patron saint, even if it's as an excuse to gather every March to chug green beer and don cheap, offensive party gear (looking at you, guy at the bar wearing a "Drunk Lives Matter" t-shirt). But far less familiar is St. Brigid, the co-patron saint of Ireland and Celtic goddess whose legacy is celebrated every February with a feast day.

On Mon., Feb. 1, the Pittsburgh Irish Festival, along with the Association of Irish and Celtic Festivals, will raise awareness of this often overlooked saint with A Celebration of St. Brigid. The event includes a St. Brigid's Day Concert featuring female Irish musicians from around the world, which will be live-streamed on Facebook and YouTube.

“In Ireland, St. Brigid's Day marks the beginning of springtime, a movement from the darkness of winter to the light of spring,” says Mairin Petrone, executive director of the Pittsburgh Irish Festival and executive committee member of the Association of Irish and Celtic Festivals. “St. Brigid is also a symbol of the strength of women and we are thrilled to honor her on February 1 by showcasing a phenomenal group of female performers.”

She adds that the saint is most known for Brigid's Cross, a woven version of a cross usually placed at doorways to protect homes from harm.

Petrone says that, while St. Brigid has been highlighted in Pittsburgh Irish Festival workshops and educational programming, and through items sold by the Irish Design Center in Oakland, this is the first official event for St. Brigid's Day being hosted by the Association of Irish and Celtic Festivals.

Believed to have been born in 451, St. Brigid, aka Brigid of Kildare, serves as the co-patron saint of Ireland along with Patrick and Columba. Her legacy includes founding a monastery in Ireland's County of Kildare and bringing women into religious service, as well as a long list of miracles that range from curing the afflicted to – no joke – turning water into beer. To this day, her cathedral still stands in Kildare Town’s Market Square, and it's there that a Perpetual Flame is lit each year in her honor.

She also shares a name with a pre-Christian Irish goddess and her feast day replaced Imbolc, a pagan festival marking the beginning of spring.

“Many Irish and Celtic traditions have pagan roots including Halloween, fairies, and many familiar Celtic knots,” says Petrone.

In a press release, Emer Rocke, Ireland’s Deputy Ambassador to the U.S., expands on the accomplishments of Brigid and other Irish women, saying, "From Annie Moore to Mother Jones, Georgia O’Keefe to Maureen O’Hara, Irish women and their daughters have blazed a trail across every sphere of American life. … Rooted in the Celtic festival of Imbolc, Brigid’s day has a history every bit as storied and significant as St Patrick’s. And, in the years ahead, our Embassy team and seven Consulates – four of which are led by female diplomats - are determined it should be just as widely celebrated.’’

The concert adds an offering by Pittsburgh Irish Festival after the pandemic led to the postponement of its big 2020 festival, which is scheduled to return Sept. 10-12 for its 30th anniversary. The organization also launched the Live Stream Irish Music Series as a way to sustain its mission of celebrating Irish culture without the risk of in-person events. 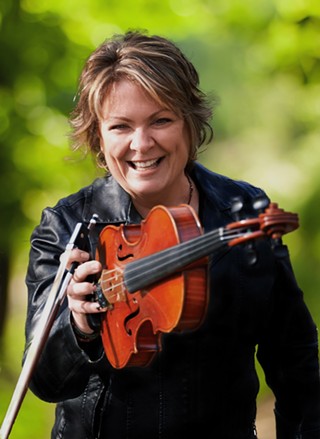 Brian Mulligan
St. Brigid's Day Concert co-host and performer Eileen Ivers
Petrone says Pittsburgh Irish Festival has played a significant role in the planning and promotion of the virtual event, as well as the entertainment portion. For the concert, local performer Katie Grennan, fiddler of Gaelic Storm, will accompany singer-songwriter Ashley Davis during her performance.

The show features a total of eight acts representing the traditional music, dance, and other cultural touchstones of Ireland, including Cherish the Ladies, Cassie and Maggie MacDonald, The Friel Sisters, and Morgan Bullock, a TikTok-famous Irish dancer from Virginia.

Co-hosting the event is Grammy and Emmy-award nominated Irish-American fiddler, Eileen Ivers, who will also perform.

“St. Brigid was a light in the darkest of times, a peacemaker, a woman who provided sustenance and a safe haven for all,” says Ivers. "I’m thrilled to be joining other female artists as part of a livestream concert honoring this beloved Irish saint. May the perpetual flame that St. Brigid ignited so long ago, which still burns in Kildare Town’s Market Square today, live in our hearts and shine through the gift of music and community.”