“We would receive mail for other Honeys.” 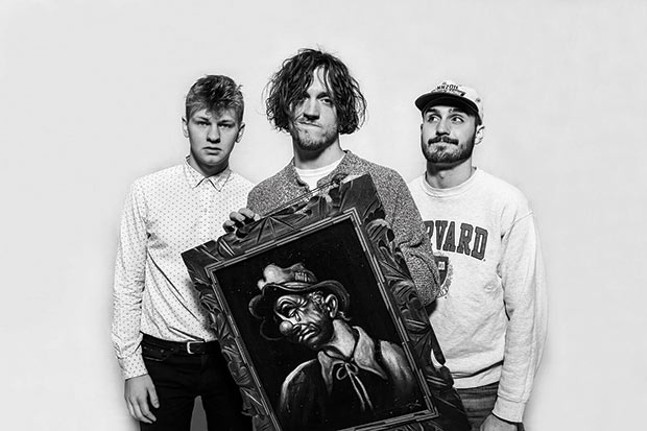 Breaking News: For the first time in recorded history, honey didn’t stick. The Pittsburgh indie-punk trio that’d been recording and playing under the name Honey since 2010 held a “new-name-reveal” gig last Thursday at Spirit to announce its new moniker, Rave Ami. Although it may come as a surprise to fans of the group, considering it’s been less than a year since its sophomore record, Mock Pop, dropped, the change had been an acknowledged inevitability for some time — and for a myriad of reasons.

“When we agreed to, like, take the band seriously … that we were gonna try and hit the road and make records and do it long term, we soon found out how many other Honeys existed,” says drummer Evan Meindl. “Especially in the markets we were playing a lot.”

He and his bandmates — frontman Joe Praksti and bassist Pat O’Toole — spoke to City Paper in a green room a few hours before they took the stage for the big reveal. Together, they explained the complications that occurred once they realized how ubiquitous the former name really is.

“A lot of bands we were playing with had played with other Honeys,” says Meindl. “We would receive mail for other Honeys. Which made us wonder: ‘Like, are other people getting our shit that’s meant for us?’”

In addition to the confusion, the name Honey is an SEO disaster for those looking for the band on the internet, which severely limited the amount of ears that their music was reaching.

“It made setting up shows really hard,” says Meindl. “People had a hard time finding us on the internet. Like, we’re the only Honey that’s verified on Spotify, but you still can’t find us unless you type in our album name. And the only people doing that are the people who know the name of that record.”

“It made the pursuit for more exposure kind of tough, and we kind of agreed upon having something that was very authentically ours,” he adds.

At the end of 2017, the trio had the conversation and decided that it was finally time to make the switch. However, actually landing on a new name proved more difficult than expected.

“We had lists of band names, lists of words that we liked that we were like, ‘We should try and go for something with this word. What does it conjure?’” Praksti says, in a jokingly pseudo-philosophical tone.

In the end, Rave Ami came from Praksti’s drunken misreading of a jukebox brand called Rowe Ami. It quickly resonated with the others, and with less than a week to go before the reveal gig that they’d booked months earlier, and with new music dropping the next day, they sprung for it.