Pittsburgh has the most educated immigrants in the U.S.

Data shows that 58 percent of the Pittsburgh region's immigrants are college educated. 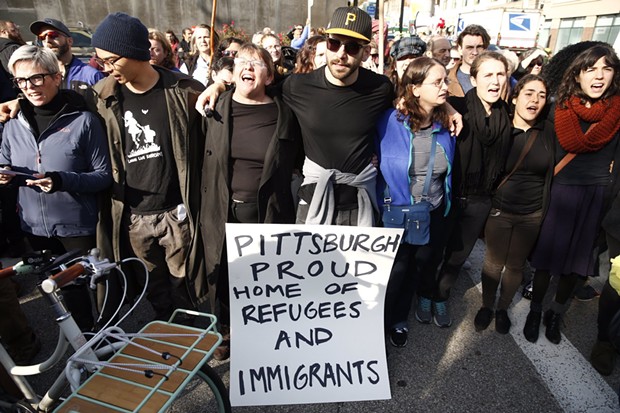 CP photo: Jared Wickerham
Marchers holding an immigrants rights sign during a rally for Tree of Life victims
Pittsburgh’s immigrants are the smartest in the U.S. The majority of foreign-born adults settled in the Steel City have earned a bachelor’s degree or higher.

Data compiled by the University of Pittsburgh’s Center for Social and Urban Research show the Pittsburgh metro area contains the highest percentage of educated immigrants in the nation. In Pittsburgh, 58 percent of foreign-born adults have received a college education, far above the national average of 31 percent.

The Center for Social and Urban Research defines the city’s foreign-born population as including immigrants, those who have or are seeking permanent residency, and people residing in the U.S. temporarily.

While more than half of Pittsburgh immigrants have college degrees, Pittsburgh also has the fewest amount of immigrants compared to the 40 other large metro areas. This community currently makes up 4.4 percent of the total area population, a large drop from 25 percent about a century ago.

By contrast, San Jose has the second most educated immigrants at 52 percent, but also is comprised of 51 percent foreign-born residents.

The Center for Social and Urban Research posits that the high proportion of foreign-born college graduates in the Pittsburgh region likely results from the advanced educational requirements of many growing industries and occupations in the area, including life sciences and engineering.

Pitt’s data runs in contrast to perceptions of immigrants in the area held by some in the region, especially outside of Allegheny County. The greater Pittsburgh region, when excluding Allegheny County, has proven to be more open to anti-immigrant sentiments.