“Most of what we do here is fantasy fulfillment.”

The location is secret; it’s a private members-only deal. But don’t let the mystery dissuade you. The Body Shop isn’t one of those seedy sex clubs out of an episode of Law and Order SVU. In fact, don’t even call it a sex club.

Esplandiu first got involved in what’s called the lifestyle community — sometimes referred to as swingers — in his Ohio hometown. He started organizing parties for like-minded couples, and eventually the parties became so popular that he decided to turn the fun into a business. Now he has one nightclub in Ohio and a second location in Pittsburgh.

At first glance, much of the Body Shop looks just like any other club. There’s a dance floor — albeit with a stripper poll — and a DJ booth built into an old car. The Body Shop doesn’t sell alcohol, but members are invited to bring their own. On Saturdays, dinner is served at 10 p.m.

“People come in nervous. People think it’s what you see on television. But it’s not,” says co-owner John Ross. “Within 15 minutes of being here they feel comfortable.”

A few steps away from the dance floor is the main attraction. Down a hallway, visitors will find the first of a series of rooms where couples can retire for some alone time. The level of privacy a couple has while in the rooms is up to them.

“You can leave the door open, you can have the curtains open, you can invite people in,” says Ross. “It’s an excellent way for you to explore if you’re in a committed relationship.”

More photos from inside Body Shop 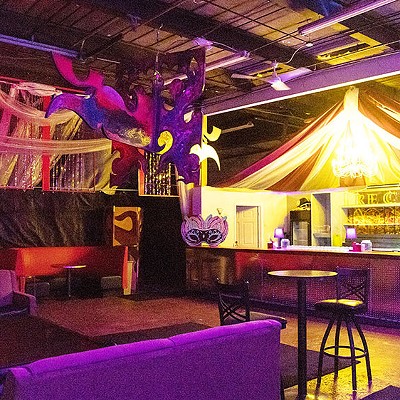 “Most of what we do here is fantasy fulfillment,” says Esplandiu. “It’s a safe place. Sex is fun and enjoyable, and unfortunately in this country and some others, we demonize it.”

Tamer rooms include one themed around Pittsburgh and another dedicated to Andy Warhol. There are also rooms that simply look like generic hotel rooms. Another space, called the blackout room, glows in the dark.

The clientele at the Body Shop is as diverse as the club’s rooms. Esplandiu says one woman runs around the club holding a teddy bear while her husband chases her. Another couple began visiting after 30 years of marriage.

The Body Shop also offers a number of educational events where couples can learn things to enrich their relationship. A recent event, with a licensed massage therapist, focused on couples-massage techniques.

Protecting their clientele is important to the Body Shop’s owners. Consent is also important at the club. There are numerous signs posted on the walls saying, “Ask the hunk before you touch the junk,” and “Ask the cutie before you touch the booty.” And to protect the privacy of members, visitors must put a sticker over the cameras on their phones.

Additionally, the Body Shop has methods for screening potential members. For singles, membership fees must be paid with a credit card. It’s a way of weeding out those people who might be trying to hide their activities from a partner or spouse. This precaution is not for moral reasons, but because Esplandiu says these people tend to be more aggressive when visiting the nightclub.

“Other than that, everyone is welcome,” Esplandiu says. “There’s no other criteria other than you have to be open-minded.”