Pittsburgh had its second wettest year ever; can the region’s infrastructure handle all the precipitation? | News | Pittsburgh | Pittsburgh City Paper

Pittsburgh had its second wettest year ever; can the region’s infrastructure handle all the precipitation? 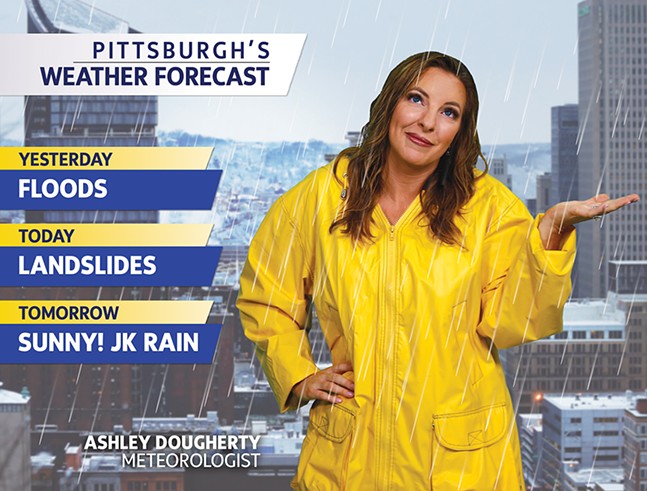 This year could become the wettest year Pittsburgh has ever seen, and it’s capping off a very wet decade. Our old infrastructure might not be able to keep the water at bay.

The increased number of floods and landslides are putting more stress on Pittsburgh’s already aging infrastructure. And with climate change hinting at more rain for the Steel City's future, some are calling for the region to take these infrastructure problems more seriously.

According to Greg Scott of Pittsburgh’s office of the American Society of Civil Engineers (ASCE), the success of our stormwater system depends on precipitation levels staying within a typical range. Pittsburgh’s water-related infrastructure is experiencing three main shortfalls: municipal stormwater systems, locks and dams, and problems relating to landslides and lack of green infrastructure.

The ASCE recently released a report card for Pennsylvania’s infrastructure, giving the commonwealth a C- overall. For water-related infrastructure, the state did even worse, receiving D grades or below for inland waterways, stormwater, and wastewater. Scott says many of those deficiencies can be found in Pittsburgh.

When it rains too much in Pittsburgh, Cincinnati is the one who pays dearly.

Pittsburgh has a Combined Sewer Overflow (CSO), meaning that enough rain — 1/10th of inch in a short time period — will cause stormwater and wastewater (from our toilets) to mix and then overflow into the rivers. During heavy storms, that muck makes it into the Ohio River and down to Cincinnati, where it is treated to become drinking water.

And with Pittsburgh getting so much precipitation this year, and over the last decade, that has happened a lot. “Last year, for 140 days of the boating season, there was a discharge of CSOs into the river,” says Scott.

Scott says reducing CSO overflows is important because Pittsburgh is starting to see our riverfronts as an asset, with riverfront development, parks, trails, and even increased water recreation.

Scott notes that the Allegheny County Sanitary Authority (ALCOSAN) is currently in the midst of a decades-long infrastructure project to alleviate some CSO overflow issues. ALCOSAN has also heeded some of the advice of environmentalists to include more green infrastructure in their plan. Green infrastructure includes planting trees and rain gardens that soak up precipitation, instead of letting it run into the rivers.

CP photo by Jared Wickerham
Vehicles drive down Route 51 in the South Hills.

But ALCOSAN’s upgrades won’t fix every storm and wastewater problem in the region. Scott says municipalities should pass legislation to mitigate the stormwater runoff problems that often coincide with large developments.

Scott says many new developments, particularly in Allegheny County’s suburbs, include large paved surfaces that give little thought to the effects of stormwater. Parking lots, strip malls, and other car-friendly projects are built mostly on concrete and asphalt. Scott says most don’t consider adding green infrastructure that can help reduce flooding.

“If you generate runoff, you pay. You use more sewage, you pay,” says Scott. “You are sort of incentivizing the conservationist mentality.”

Scott says this can localize the importance of reducing stormwater runoff and avoid a mindset of waiting for orders from federal groups like the Environmental Protection Agency. Scott says some regional municipalities have already established these, like Mount Lebanon and Meadville. He hopes more follow suit.

The Great Flood of 1936 was the most devastating surge Pittsburgh has ever seen. The water level at the Point crested 21 feet above flood level. The Strip District and Downtown were almost entirely underwater.

Since then, locks and dams have been installed up and down the Allegheny, Monongahela, and Ohio Rivers, helping mitigate floods over the decades. (Floods caused by Hurricane Ivan in 2004 crested the river six feet above flood level.)

But those locks and dams are aging. Local industry groups and politicians like U.S. Sen. Bob Casey (D-Scranton) have called for repairs.

Casey told TribLive in July that failing to complete the necessary repairs would be “catastrophic” for the Pittsburgh region. Scott agrees. He says maintaining our locks and dams will help avoid catastrophic floods.

The U.S. Army Corps of Engineers, which manages the region’s locks and dams, announced on Nov. 28 an additional $123.7 million in repairs funding for the 2019 fiscal year.

“These additional funds provide a boost to the regional economy while maintaining and improving our vital water resource infrastructure,” said Pittsburgh District commander Col. Andrew “Coby” Short in a press release. “This will help ensure we fulfill our commitment to reduce flooding, provide reliable navigation, enhance the environment and offer quality recreation for the citizens of the Upper Ohio River Basin.”

Pittsburgh ASCE president Robert Dengler is “extremely pleased” the region is receiving this additional funding. He says these funds “will begin to address the backlog of capital projects” that the Army Corps is responsible for maintaining. If Pittsburgh continues receiving similar allocations moving forward, he is hopeful the region will fix its water-infrastructure shortfalls.

“Most of our houses are built on hills, and with the excessive rain we've had, it has caused a lot of problems,” says Dougherty.

Pittsburgh Mayor Bill Peduto proposed allocating an additional $10 million of the city’s 2019 budget to deal with landslides and issues caused by flooding.

According to Scott, landslides provide a unique problem for Pittsburgh because there's not much that can be done to stop them. Scott says Pittsburgh already has a zoning ordinance that prohibits new construction in landslide-prone areas. He recommends municipalities maintain adequate rainy-day funds to pay for clean-ups after landslides.

Scott also says green infrastructure fixes, while good for many communities in Pittsburgh, are not a silver bullet for stormwater management. He says it's not always wise for hillside communities to saturate their soil with precipitation since that might actually create landslides.

“Etna has been very successful in its green infrastructure, but Etna is on an alluvial plane,” says Scott, describing how the river town sits on porous soil that is great at absorbing excess water. “But if you are on the top of a hillside of clay, [green infrastructure] is bad idea.”

Scott hopes that as Pittsburgh addresses its water-infrastructure problems, leaders heed the advice of locals, first and foremost, since they understand a region's topography and history the best.

“The solution is varied,” says Scott. “But we have the expertise in Pittsburgh, let’s use it.”