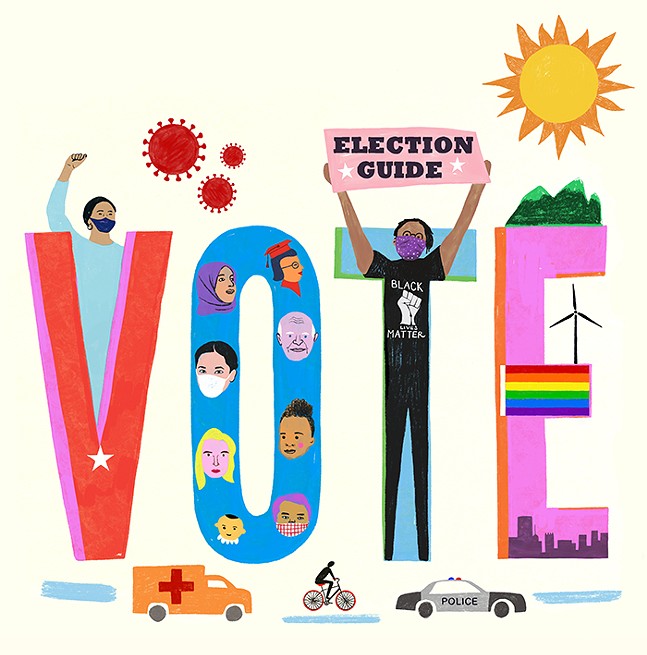 Illustration: David Pohl
Odds are, you have already voted in the 2020 General Election. Allegheny County voters have already returned well over 200,000 mail-in ballots. That’s more than 30% of the turnout in 2016, and there is still more than a week left to vote. With many readers’ votes cast and their minds already made up, the Pittsburgh City Paper General Election Guide for 2020 is only focusing on local races that likely will be close enough where every vote will matter. Even those cast at the last minute.

In fact, those ballots cast by undecided, independent-minded voters will likely decide the races CP has highlighted. Each of the races in this guide has been forecasted by election experts to be among the closest in the county and state. CP isn’t including every race in the area since many are unlikely to be close. These state legislature races are truly the races to watch this cycle.

And there is potentially a lot riding on the votes in these districts. The Democrats need to flip nine state House seats if they are to control the House come 2021. CP has highlighted three swing districts in the county.

Whether they flip or remain in Republicans’ hands could be paramount in deciding which party controls the state House, since several seats in the Philadelphia area are more likely to flip too.

There is also an outside chance of the Democrats flipping the state Senate, which would give them a trifecta as Gov. Tom Wolf (D-York) occupies the governorship. That would mean potentially big changes for the state, including bills to potentially raise the minimum wage, legalize recreational marijuana, and provide nondiscrimination protections to all LGBTQ Pennsylvanians.

The Democrats need to flip four state Senate seats and defend all their current seats. The Allegheny County seat highlighted in this guide (Senate District 37) is likely the most difficult to defend, and that is why it merited inclusion.

+ An Election Night Drinking Game by Maggie Weaver
• What is your voting plan: A column by Tereneh Idia
• How to vote in person if you have already requested a mail-in ballot
• What to know about the Pittsburgh Citizen Police Review Board 2020 ballot question