Art by Austin Breed
The "ravenfolk" of Beak, Feather, & Bone.
Local writer, designer, and dramaturg Tyler Crumrine never expected that the Kickstarter campaign for his latest project, Beak, Feather, & Bone, would far exceed its $1,000 fundraising goal. With eight days left in the campaign, the “collaborative worldbuilding tool” and “competitive map-labeling RPG [role-playing game]” has garnered over $6,000 in donations.

But it should be no surprise, considering the success of his last game-focused project, a poetry book designed for tabletop gamers called Adventure Hooks. As of now, the book is currently sold out on its publisher site, Cool Skull Press.

“While [Adventure Hooks] could be used to inspire RPG campaigns, it still required an existing game like Dungeons & Dragons to actually run them in,” says Crumrine. “Beak, Feather, & Bone includes all the rules you need on its own."

As described on the Kickstarter page, Beak, Feather, & Bone invites players into a city populated entirely by ravenfolk, anthropomorphic bird-like beings illustrated by fantasy/comic book artist Austin Breed. Each player is given a role in the community, which range from workers like miners, farmers, and ranchers, to thieves or “strangers.” Using an unlabeled map created by Texas-based visual artist and illustrator, Jonathan Yee, players take turns identifying, claiming, and describing landmarks. (Crumrine adds that the inclines on the map are directly inspired by Pittsburgh's landscape.)

As buildings are claimed by each player, a narrative for the town and its inhabitants emerge.
click to enlarge 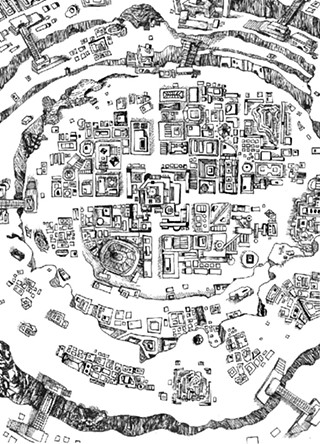 
Crumrine says he came up with the concept for Beak, Feather, & Bone when he realized how “exhausting” it is to write a typical RPG book like the ones used for Dungeons & Dragons.

“The kind of Dungeons & Dragons books that are all the rage right now are these huge, 300-page ‘complete city kits’ that tell players what's behind every single door in a setting, but when I tried to write that kind of book it sucked all the joy out of the game I loved,” he says. “And the more I planned in advance for my games, the less say players actually had in the story.”

As opposed to limiting players, he devised something that would allow them to design the world as they went along.

“Eventually I realized it was a lot more satisfying if I invited my players to help define our games' settings with me,” he says. “Instead of monologuing at them, I'd ask them to tell me what kind of things they wanted to be able to interact within a setting and gave them equal creative authority to make decisions about the world. The result was a lot less work for me and a lot more fun and player-investment at the table.”

He believes this makes Beak, Feather, & Bone accessible to anyone regardless of their skill level, unlike typical RPGs, which often involve complicated rules and interactions.

Beak, Feather, & Bone includes a map and simple, zine-like, 30-page instruction booklet. Those pledging to the Kickstarter campaign will receive a PDF version of the booklet, along with a PDF of the map to print out.

In addition, players will need a deck of playing cards, colored pencils, and notecards, none of which are provided.

Besides funding the game, Crumrine sees the Kickstarter campaign as giving him room to focus more time on his work as a full-time freelancer, and to run his small-press publishing project, Plays Inverse.

“I'm beyond thankful for the affirmation and encouragement the Kickstarter has given me as a writer and designer, but I'm the most grateful for the extra time and financial safety the campaign's success provide as I continue to search for more and full-time work in 2020,” he says.

Those interested can still donate to the Kickstarter campaign until Sun, Feb. 16.