“We’ve had kind of a down year, so it was great for the girls to have something to lift their spirits.” 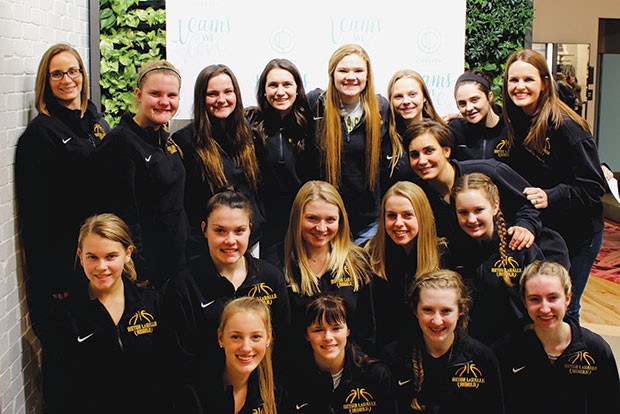 Photo courtesy of Chelsea Collective
Seton-LaSalle girls-basketball head coach Whitney Jones (top row, far right) with her assistant coaches and team at the Teams We Love launch event.
Youth sports is a growing industry in the United States, valued at $9 billion annually. And according to income-tax company TurboTax, that translates to an average cost of $671 yearly for parents across the country. But for many families, the cost of playing is too steep, forcing youth sports teams to come up with creative ways to raise funds.

From bake sales, car washes and hoagie sales to raffles and selling advertisements, the Seton-LaSalle Catholic High School girls basketball team has done it all.

“We do a lot of fundraisers,” says head coach Whitney Jones. “We make it so none of our kids have to pay to play.”

And now thanks to a new benefactor, the burden on the team will be reduced. Jones’ team was selected as the first recipient of retailer Chelsea Collective’s new Teams We Love program.

“We were honored. It was really cool,” Jones says. “We’ve had kind of a down year, so it was great for the girls to have something to lift their spirits.”

Jones played basketball for the University of Oklahoma and says she knows the positive impact sports can have on adolescents.

“Sports played such an important role in my childhood and continues to do so in my adult life,” Jones says. “In my role as a high school basketball coach, I see how participation in sports helps keep our student athletes on track at school, at home and in their everyday lives. This is why I am so excited for the Teams We Love program, because I know it will bring some much-needed support and encouragement to these young women, fueling their best efforts and helping them realize their full potential.”

Every two weeks, Chelsea Collective will donate 10 percent of every purchase made with a Teams We Love coupon — available online — to its selected team. Eligible teams include school or community-affiliated teams, such as cheerleading, dance and other athletic organizations.

“I think it’s so great that Dick’s is promoting fitness,” says Jones. “I really admire what they’re doing.”

To nominate a team in the Pittsburgh area, email at TeamsWeLove@ChelseaCollective.com.