Pittsburgh filmmaker talks about his new documentary on furries

“Our film is about getting to know people who are very involved.”

By Ashley Murray and Aaron Warnick

Each summer in Pittsburgh, bipedal foxes, wolves, horses and the like can be seen waving from the Downtown streets outside of the Westin Convention Center hotel, on Liberty Avenue. These anthropomorphic-enamored folks are gathered for the annual Anthrocon, the largest meeting of the furry community. Local TV stations flock to capture the visuals. Passersby stop for a high-five and a selfie, and maybe they walk away with questions about furries or gossip about their sexual fetishes. On Thu., March 10, the Pittsburgh premiere of the documentary Fursonas provides the chance to learn about furry fandom — the humans behind the costumes, artwork and dance scene. The film also addresses  the sexual aspects of the community. We caught up with Fursonas director Dominic Rodriguez and a local furry featured in the film, Boomer the Dog, who lost a local 2010 court case to legally change his name. 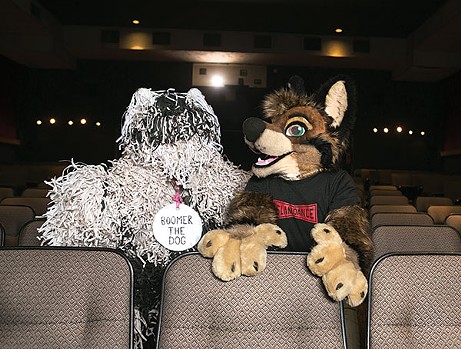 Tell us about the film.

Dominic Rodriguez: Fursonas is a four-year exploration into the furry community. Furry, in the broadest sense, is anybody interested in anthropomorphic animals, so that’s like cartoon animals. You see people who wear the costumes, that’s a very visual part of the community. Our film is about getting to know people who are very involved, and then it also goes deeper into furries’ relationship with the media and themes of community and identity.

What inspired you to do this project?

Rodriguez: The producer of the film [Olivia Vaughn] and I were [at] Point Park University together, so this was our senior-thesis film. The original project we wanted to do ended up falling through, and this was right around the time that Anthrocon was going on. I had always been interested in furry [fandom]. I am a furry and have identified as that for 10 years, but my [film] crew didn’t know it. So I was like, “Maybe we can go to Anthrocon. Maybe there could be a movie there.” It was sort of my excuse to get more involved with the community.

Do you identify as your animal?

Rodriguez: I personally don’t. I feel more like a person than anything else. When I introduce myself to people, I prefer the name Dominic. It’s different [for] everybody, and I think a lot of furries want to look at it as more of a hobby than a lifestyle. But I also think that calling it a hobby is doing it a disservice because I think there is something deeper to it for a lot of people, and for me, as well, in almost a way I can’t explain. You look at furry art for example. It hits me in an emotional way that’s hard to define.

Boomer: I guess [I identify] more than some other furries. I thought I’ve been a dog for many years, since I was in elementary school. I think it grew over time, and I found the furry community, which is a chance for [expressing] something that’s kind of weird out in the public world.

How did you become Boomer?

Boomer: I had seen a movie called the Shaggy D.A.; my dad took me to it way back in 1976. It really kind of showed me that somebody could transform into a dog, and I was already a dog fanatic at the time. … I was like, “Wow, I could actually dream of being a dog. I would love that to happen.” It seemed like an exciting life for me.

Why do you think that people feel they have the right to ask about your sex lives?

Rodriguez: That’s also a really good question because when I started this documentary, one of the questions was, “How do you approach the sexual angle of the fandom?” If you go online and you look up “furry,” you’re going to find lots of porn and sexual things, so it’s obviously a part of it. That was something I struggled with early on, like, “Is it my right to ask people? And do they owe me an answer?” I guess it’s easy to say you shouldn’t ask people about their sex lives, but I mean, I think where it gets tricky is because from the outside this looks very much like Disneyland. But it’s not actually. It’s a bunch of different people with their different interests. For some people it’s sexual, and for some people it’s not.

Boomer: I think it’s something in the public consciousness because of the different media [coverage] over the years. When furry was not that well known, the sex part of it was something that media would focus on closely, like, “Oh look!” So it became seen as the biggest thing of what furries were about. I’ve been asked that question when people find out I’m a furry. They’ll say something like, “Does everybody have sex in those costumes?”... I think the open nature of the furry scene allows people to openly talk about sex and other topics that are seen as more private in other places.