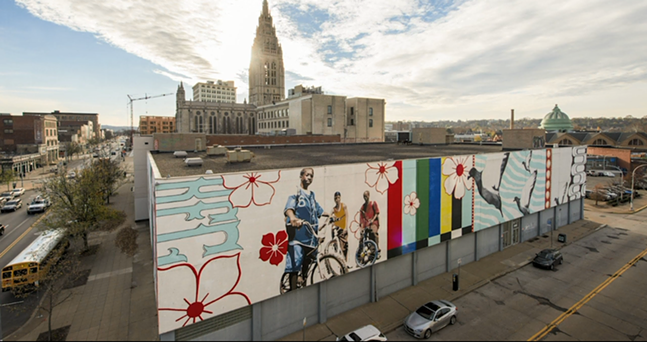 Screenshot
Screenshot of We Rise Together short film by Chris Ivey
In 2006, local filmmaker Chris Ivey released his first feature-length work East of Liberty: A Story of Good Intentions, an independent documentary covering gentrification in the then predominantly Black Pittsburgh neighborhood. Now, 15 years later, Ivey has partnered with one of the companies that moved into East Liberty since then, and they are collaborating to create a series of social justice short films in the Pittsburgh area.

The language-learning software company Duolingo moved into East Liberty in 2016, and the company is working with Ivey to produce The East of Liberty/Duolingo Social Engagement Series. A press release says the project “tackles community questions and concerns in the East Liberty neighborhood where Duolingo is based,” and “will examine East Liberty’s transformation, for good or worse, as a result of years-long gentrification.”

The first entry in the series We Rise Together is now available to view on Ivey’s YouTube and Vimeo pages.

Ivey says that he hopes to contribute to the “seismic shift” caused by the stories of George Floyd and Breonna Taylor: Black Americans whose deaths at the hands of police officers sparked national protests and calls for reform. Mostly, he wants to give voices to those who are often left out of the conversation when it comes to actually spurring real change.

“I think now, while the project is in process, is the vital time to document and address this issue starting from where it should always begin, the individuals,” says Ivey. “Time and time again through my work I have seen organizations and leaders fail because they neglect to engage communities first. “

The East of Liberty/Duolingo Social Engagement Series originally started in 2019, when Ivey met with Ann Lewis, a Detroit-based artist hired to create a mural outside Duolingo’s headquarters at Penn and Euclid avenues. The work titled To Be Human was in direct response to the controversy surrounding the removal of Lend Me Your Ears, an iconic mural that had previously graced the property before being destroyed by developers in 2015.

The production of To Be Human also included a number of initiatives from working with students at nearby Obama Academy to an arts fund granting $150,000 to local artists.

The new films will include perspectives from a variety of interview subjects and serve as a tool highlighting social justice issues in Pittsburgh, with Lewis’ mural design acting as “the skeleton” to the series.

“In a continuation of my previous work around gentrification, I want to create films that showcase people from different backgrounds, using different creative means to communicate narratives that resonate globally,” says Ivey. “Through art, poetry, music, and most importantly dialogue, I want to create films that address the experiences I’ve had over the past three years with a group of artists and individuals in association with Duolingo.”

Future films will also include Natiq Jalil and Alison Zapata, the first recipients of the Duolingo arts fund for Pittsburgh area artists.