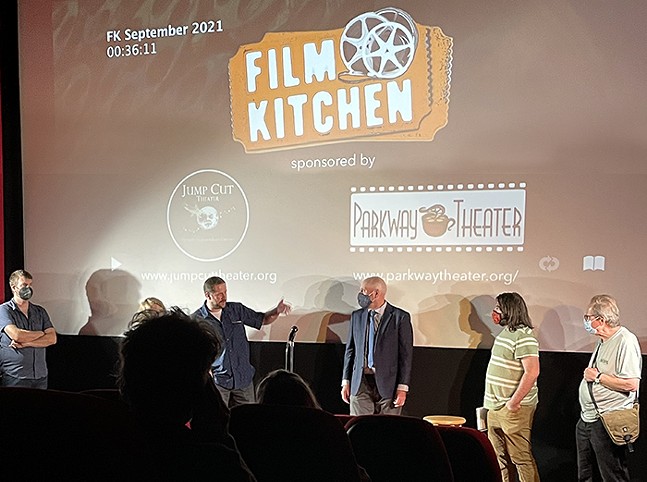 Courtesy of Jump Cut Theater
Film Kitchen at Parkway Theater
Horror movies are a staple of the fall season, as viewers indulge in slashers, monster flicks, ghost stories, and other offerings from the genre as a way to build up to Halloween. Now, Pittsburgh Film Kitchen and Jump Cut Theater want local filmmakers to contribute to this tradition by submitting to a Halloween-themed short film showcase.

The monthly event dedicated to supporting and promoting the local film scene is accepting creepy content coming in at 10 minutes or less. Film Kitchen host and curator Matthew Day says that, while past October Film Kitchens have been Halloween-themed, this year will see looser requirements, with submissions being open to horror films, as well as entries that are “monster-themed, fall-themed, costume-themed, even science documentaries.”

“It’s very open to interpreting what is Halloween,” says Day.

The films will screen on Oct. 12 as part of Film Kitchen's Halloween Hootenanny.

It was a Halloween event that broke the series’ long absence in 2020, when Day along with Steve Haines of Jump Cut Theater and Flea Market Films, hosted a virtual presentation of “seasonally appropriate shorts from some of Film Kitchen's favorite makers.”

Film Kitchen — which is now presented by Jump Cut — is no stranger to themed movie events, with past screenings covering coffee, "old wives' tales" and urban myth, stink bugs, and front porches, among other subjects.

Film Kitchen is a long-time showcase for filmmakers in and around Pittsburgh and has had a tough go of it over the past few years. First, the series lost its permanent home in 2018 when Pittsburgh Filmmakers' location on Melwood Street shut down and was sold to Carnegie Mellon University. Once it was launched again, the COVID-19 pandemic kept it online, with viewers having to watch offerings over Twitch.

Jump Cut recently announced that it would return to in-person screenings in September and that it had finally settled at Parkway Theater, a restored venue in McKees Rocks that hosts movies, as well as comedy shows, live music, and trivia nights.

Day says Jump Cut looks forward to continuing the Film Kitchen series each month at Parkway, in addition to special programming. On Wed., Sept. 29, Jump Cut will celebrate National Silent Movie Day with a screening of the 1922 silent film Häxan, featuring live musical accompaniment. On Oct. 23, Jump Cut will also launch its four-part Roadshow series, which highlights "so bad they're good films," with a screening of Manos: Hands of Fate, an event that was originally supposed to happen in August and was postponed.

“The Parkway Theater and Film Lounge is a great venue,” says Day, pointing out amenities like the front bar and restaurant, featuring beer by the on-site Abjuration Brewing, along with the back screening room. "It’s a perfect home for Film Kitchen.”