Anderson says she has always admired fat activist spaces like PNW Fattitude and Fat Girls Hiking, and she started to think more about building a similar community here in Pittsburgh after leaving a corporate job to focus on teaching yoga. PFSC was born out of this desire and is slowly growing its social media following.

Anderson says that, while PFSC  is very new, it has quickly grown by word of mouth, demonstrating a need for this type of community in the city.

Anderson says that fat activism has been around for a long time, longer than people might think. There is a common misconception that people in previous decades were naturally thin, but an early fat acceptance demonstration occurred in New York City in 1967, and author Johnnie Tillmon wrote about being Black and fat in the early 1970s.

Though the movement and its core values have shifted over the years, fat activism remains an initiative to help stop weight-based bias and discrimination.

Those unfamiliar with the terms fat acceptance or fat activism may have heard of “body positivity," or BoPo. While the ideas may seem similar, Anderson points out that the BoPo movement has become mainstream, making it more susceptible to corporate manipulation. Yes, we may see more plus-sized models in ad campaigns and things of that nature, but even those models fall into a particular body standard.

“Mainstream body positivity says you should love your body and that it's beautiful," says Anderson. "But it's gotten #girlboss commodified in the mainstreaming process. I'm happy for every person that has grown in confidence because of body positivity, but in some spheres, like advertising, the goalposts have been moved but the process is still the same, the representative perfect body is still white, able-bodied, and cisgender, but maybe now they won't photoshop out a fold when the model sits down. Also, no one can love their body all the time — it's just another standard people feel compelled to meet.”

For Anderson, fat positivity is a “celebration of the resiliency of the fat person’s experience in the face of discrimination and marginalization.” It also means respecting a person and their body even if they don’t fall into the category of “healthy.” Anderson says “good health” isn’t a guarantee or a moral value.

Some of the categories you can currently find on the PFSC Instagram page are fat-friendly seating sources, health care providers, and service providers. There have been many horror stories shared online about fat people going to the doctor with an issue, only to be turned away and told to lose weight. It isn’t until a medical emergency like a tumor or some other serious health event unrelated to their weight that they are taken seriously and treated. PFSC hopes to direct fat people in the city toward health care providers that won’t ignore their very real concerns.

There is also a fun side to this group. Anderson says they are hosting a pool day in August, and they are "hoping to plan a clothing swap in September and a spooky cemetery walk in October.”

“I'm so excited for the in-person meet-ups and for people to make fat friends," says Anderson. "I personally don't have a lot of fat friends in real life, and there is a hunger, pun intended, for that shared community."

She adds that that people have already suggested other ideas for PFSC, including a zine or publication featuring "Pittsburgh's fat creatives."

"I'm hoping PFSC will be a hub for these ideas to branch off and grow,” says Anderson. 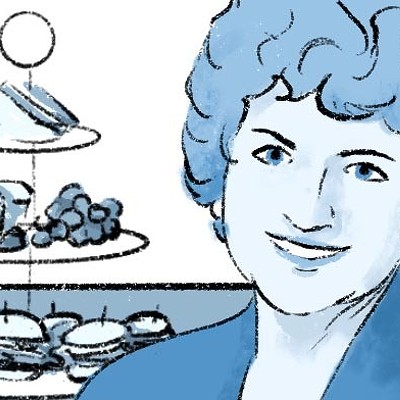 Pittsburgh City Paper editor explains to racists why Leon Ford was the perfect person to be named CP’s Pittsburgher of the Year.