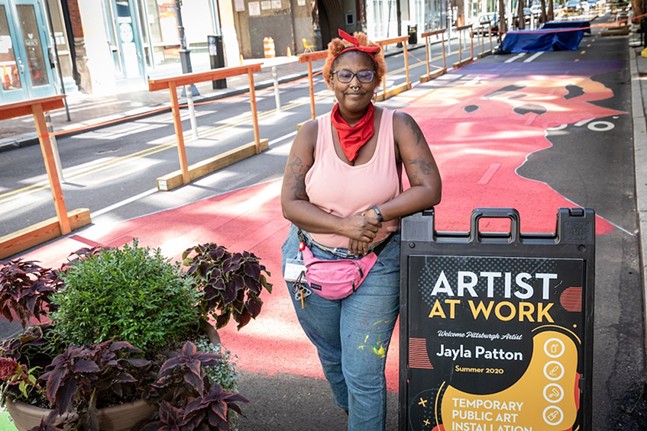 Local artist Jayla Patton completed "Colorful Growth/Soft Waves," a 3,500-square-foot mural on the 900 block of Penn Avenue. The work is presented as part of REFORGE Downtown, an initiative that “invites the community to safely revisit and reengage with Downtown through unique events, activations, and programs,” according to a press release. The project was also designed to create public art opportunities that engage local artists.

Jeremy Waldrup, president and CEO of the PDP, says Patton was chosen because she understood how public art “creates highly memorable experiences for our community.” Public art projects are especially needed during the pandemic, when many museums, galleries, and other cultural institutions are either closed or offer limited accessibility.

The project is described as being born out of discussions that considered adjusted street layouts and designs for pedestrians and businesses to accommodate social distancing protocols.

“For several decades, we’ve recognized the impact that artistic expression can have on Downtown and, at this time especially, that these initiatives play a vital role in giving platforms to artists who are creating their first large-scale public artworks, encouraging dialogue in our community, and providing a safe way for people to get out of their homes and experience something unique Downtown,” says Waldrup. 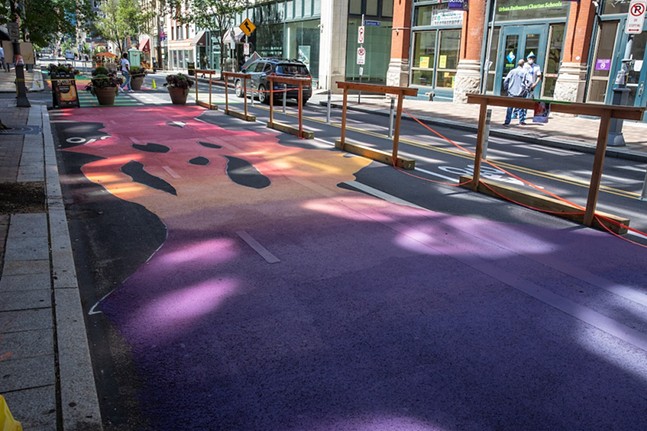 Renee Rosensteel/Pittsburgh Downtown Partnership
"Colorful Growth/Soft Waves" on Penn Avenue, Downtown.
As part of the artist selection committee for REFORGE Downtown, Marisa Williams believes the project also provides a chance to showcase Black artists like Patton, especially during a pandemic when gallery shows, crawls, and other events have been canceled.

“Giving Black artists an opportunity to inspire and motivate during this pandemic is incredibly important,” says Williams, who also serves as the head of community outreach and impact for the YMCA of Greater Pittsburgh. “Large art installations like this bring a life and creativity to Downtown and can be so transformative in sharing messages of hope and racial justice to a community facing adversity.”

A longtime member of the local arts scene, Patton has a background as an illustrator, comic artist, animator, and educator. Patton also helped create Feminist Zine Fest Pittsburgh and is one of the artists who designed a black-and-white illustration in Pittsburgh City Paper's recent Pittsburgh-themed coloring book.

“I am excited to explore storytelling through color in Downtown Pittsburgh,” says Patton. “Color really affects mood, so bringing bright color bursts and a dynamic visual change to the urban landscape will impact people in really interesting ways. You are compelled to slow down, reexamine, rethink. In the ‘new normal’ we find ourselves, it’s so important that we take some time to reflect.”

"Colorful Growth/Soft Waves" will be on view until November 2.