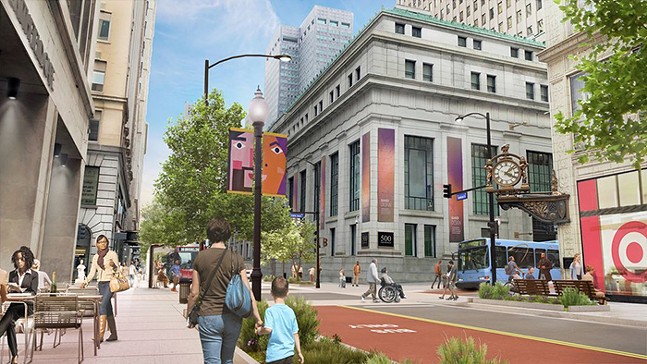 Image courtesy of Pittsburgh Downtown Partnership
Mock-up of "Smithfield Reimagined" design for Smithfield Street in Downtown
Downtown Pittsburgh, pre-pandemic, had about 110,000 daily commuters, which is 16% of all commuters in Allegheny County. Add to that the 25,000 residents and students, and the 13 million annual visitors that grace Downtown streets, and the neighborhood is home to a lot of people within its less than 1-square-mile boundary.

With so many people moving around Downtown on foot, bike, public transit, and personal vehicles, the Downtown Pittsburgh Partnership has decided it’s time for an updated mobility plan for Pittsburgh’s biggest business district.

On May 11, the partnership released a Downtown Mobility Plan with the goals of prioritizing walking, biking, and public transit, and implementing “high impact” projects that will improve streetscapes for all road users. This is the first time PDP has updated its master plan since 1999.

“Despite its regional and statewide significance, the last neighborhood plan for Downtown was created in 1999 which has left [Central Business District] without clear priorities and a decision-making framework for transportation and public realm projects,” reads the report.

PDP reports that 51% of residents in their study area — which includes Downtown, Uptown, the Strip District, the North Shore, and Crawford-Roberts in the Hill District — walked as their primary mode of transportation. And a survey taken by PDP shows that people living and visiting Downtown most enjoy that it’s easy to walk around the neighborhood and their top priority is improved streetscape amenities.

The key takeaways from the plan are that restructure parking prices to discourage rush hour driving, reduce parking supply at new developments, and repurpose excess street parking into public use facilities, transit, and other users. PDP also would like to see increased public transit frequency and capacity, better accessibility to transit service, and more investments in alternative transit options, including minimum bike parking requirements at new developments.

The mobility plan also a has a focus on improving conditions for people of color, and acknowledges that many non-white people might feel unwelcome in Downtown. PDP is also advocating a low-income fare program for public transit riders, joining other transit advocates.

The report also proposes a “reimagined” Smithfield Street, with extended sidewalks, shorter crossings for pedestrians, widened bus stops, and improved pedestrian spaces with improvements like benches, trees, outdoor dining. Some of PDP’s plans for Smithfield have already been implemented, like painted bus-only lanes, but the mobility reports lays out improvements there too, like signal prioritization for buses.