“It’s not a luxury. It’s really an intervention that has the same kind of effects as medication.”

Raylene Hoover’s life is a sitcom premise: She is a professional dog massager who’s allergic to dogs.

Hoover got started pet-sitting in people’s homes in 2004, founding Critter Sitters mostly for older pets who can’t go to kennels. Some of these elderly dogs had hip dysplasia and arthritis. To aid her own joint problems, Hoover had gotten massages for years. Why not learn how to help dogs in the same way?

So she got training in the therapeutic art of massaging mutts. Which is about the time she figured out that canines were causing her respiratory problems.

But, wait a minute — aren’t dogs massaged all the time by us amateurs? Isn’t Hoover just getting paid to pet them?

“We get that a lot,” she says. Petting is, technically, mere effleurage, which may warm up the skin, but is nothing compared to massage’s compression of tissues. Petting often excites a dog. Massage works to calm the creature — and is not necessarily applied in their favorite areas. 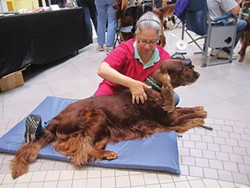 Where petting works on the surface, massaging stimulates nerve endings under the skin. Once a dog gets comfortable with her touch, Hoover pushes down into the muscles in different spots. She moves in whorls to stimulate blood flow, working the layer of tissue covering the muscles, helping them to stretch.

When Hoover first confronts a newbie with the notion of massages for the fur-covered set, she says, “I will get a shocked look, like, ‘What are you doing?’”

And that’s just from the dogs. Some of them won’t sit for their first rubdown. “Dogs don’t let strangers just touch them all over the place,” she says — although she has never met my beagle. “After a time or two: ‘Cool — I remember you.’”

Once they get to know her, her hairy charges may present pained parts for treatment. They may growl to show her a certain touch hurts, but they will also push into her hand for more pressure.

Owners are certainly skeptical, too. “There are a lot of people who say, ‘This isn’t going to help,’” she says. But some of her clients have been able to take their dogs off pain meds, saving money and sparing side effects.

Any breed and any age can benefit from Hoover’s art. She has worked her magic on a show dog too nervous to let his owner move more than a few feet away. Within five minutes of Hoover beginning the massage, she recalls, the dog relaxed to the point that the owner was able to walk off. He never noticed she was gone; he didn’t even look up.

Massage also works on the other end of the domesticated set. She recalls being asked to massage a four-month-old Doberman at a bring-your-dog-to-the-mall event. The dog’s owner said he wouldn’t slow down. “He loved it and went straight to sleep,” Hoover recalls.

Hoover arrived at the North Side home of two clients, a pair of large hounds who were once even larger but are in their twilight years now, experiencing pain she has come to alleviate.

“I give wellness massage,” she explained. “It doesn’t heal anything. It’s not veterinary care.”

But the owner of these pups has certainly seen improvements in them since Hoover started making house calls. Before, one of the dogs would inch down to sit, like an old person with arthritis, and then flop. The other stopped going up the stairs at night to sleep in the owner’s bedroom, and was reluctant even to descend other stairs to go outside.

After a month — two massages — the owner saw a difference. “The first things I noticed were that they were sleeping more with ease,” she says. They were stretched out like young dogs. Both dogs also were standing longer, getting up more readily.

“One of the key benefits is being able to do it in their home, in their beds, with their mom and their treats,” the owner says. “It’s not a luxury. It’s really an intervention that has the same kind of effects as medication.”

Hoover began on the first dog. “I usually start on the head, because that gets them to relax,” she said. The animal seemed to be soaking up the touch. Eventually Hoover progressed to a circular massage between the dog’s vertebrae, reaching his small muscles, promoting blood flow around nerves. When she reached the bottom of the spine, the dog’s back leg twitched.

The second dog pulled away from Hoover’s touch when she reached his back. But he then pushed his head against her hand. She moved her hands down each front leg, then each back leg. When Hoover stopped massaging to gesture, the dog lifted his head. His message was clear: Why have you stopped?

At the end, for being a good boy and allowing Hoover to massage her, he got a treat.