Pittsburgh distilleries are making rum a spirit to watch

Forget Captain Morgan and Bacardi, this rum is for sipping, not chugging

Rum is the new whiskey. Forget Captain Morgan and Bacardi — it’s not college anymore — this rum is for sipping, not chugging.

Thanks to a trio of Pittsburgh distilleries, Wigle Whiskey, Maggie’s Farm Rum, and Kingfly Spirits, rum is headlining the next spirit obsession.

Blake Ragghianti of Kingfly Spirits started refining his spiced rum in 2012. Before landing on the now award-winning spirit, Bliss 1895, he tested over 150 iterations.

Ragghianti treats rum like gin, tincturing each spice individually before the final mix and three-year age. The spirit spends time in barrels formerly used to age wine and bourbon, endowing it with a tannic hit associated with dry, red wine. For consistency, Ragghianti practices the solera method, used frequently in Nicaragua. Barrels of young rum are blended with a portion of their predecessors, keeping each batch connected to Kingfly’s very first bottling.

Bliss 1895 is spice-forward, warm, and refined with a nutty sugar. The taste is sensational, a true marriage between raw, fresh materials. Ragghianti prefers it bare, served neat just like a whiskey. 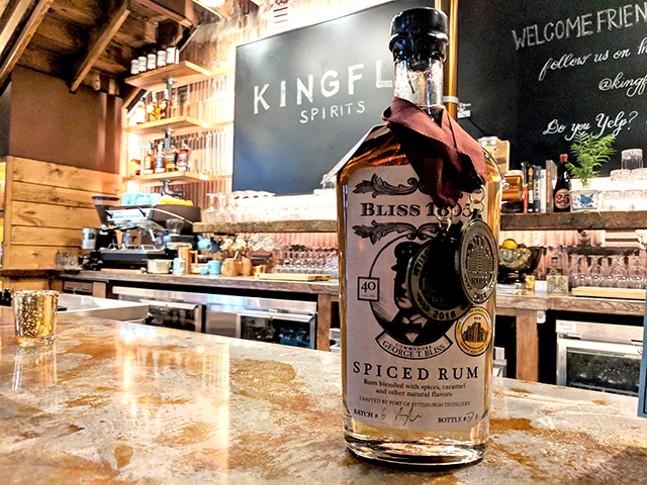 Landlocked starts with a “molasses-wine,” the basic fermentation of baking molasses. After the first distillation, it’s macerated with a variety of spices, including orange peel and cocoa nibs. The final touch is buckwheat honey (the base of pre-2017 Landlocked).

Wigle’s spiced rum leans to the sweeter side, thanks to its syrupy start. The rum works well in a cocktail, bold flavors adding a punch. Landlocked is rich and robust, the perfect fit for a Dark and Stormy.

About five years ago, Maggie’s Farm Rum debuted its first spirit, an unaged white rum. A few months later, using the young rum as a base, Tim Russell and his team bottled a spiced rum.

Maggie’s Farm spiced rum (the world’s highest-rated in rums submitted to The Spirit Journal) infuses the signature turbinado sugar-rum base with a long list of spices, holding to the distillery’s all-natural mindset. There are no added sugars, extracts, or artificial flavors, each sip fragrant, dry, and balanced.

Russell drinks his spiced rum in a simple sour, mixing the spirit with fresh-squeezed lemon juice and sugar.