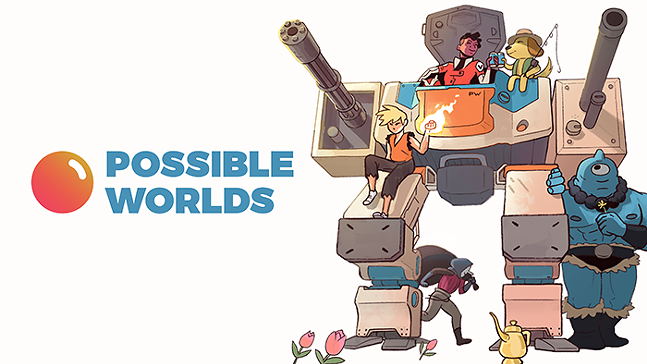 The Possible Worlds logo by Austin Breed
Like many fans of tabletop role-playing games, or RPGs, Tyler Crumrine's introduction to the community was through Dungeons & Dragons. However, the Pittsburgh-based game designer says the first game that really hooked him was Lasers & Feelings by John Harper, what he calls a “simple Star Trek RPG where all the rules fit on a single piece of paper.”

“To play Dungeons & Dragons, I had to buy a bunch of weird dice and read through multiple $50 tomes beforehand,” says Crumrine. “To play Lasers & Feelings, all I needed were three standard six-sided dice, and I could learn the rules while I played. What’s more, anyone can download Lasers & Feelings for free.”

He says Lasers & Feelings was the one that set him on the “simple, accessible RPG design path” that led him to launching Possible Worlds Games, a new business dedicated to creating games anyone can play.

“One of the things that makes role-playing games unique is that they ask players to use their imaginations during play,” says Crumrine. “With Possible Worlds Games, my goal is to make it easier for both new and established RPG players to imagine worlds full of possibilities — whether those worlds are in fantasy, sci-fi, or modern-day settings.”

Currently, the Possible Worlds website sells a number of games, all conceived and designed by Crumrine for a wide range of tastes and age groups. He also hired artists to provide artwork for the games.

The company will soon launch a Kickstarter for its flagship product, a monthly subscription box that delivers six RPGs of various genres to gamers over the course of six months.

Crumrine adds game designer to his already full resumé of creative pursuits — he works as a professional dramaturg and founded Plays Inverse Press, a small publisher of dramatic plays. In 2018, he published Adventure Hooks, a book of poems that also function as prompts for tabletop gameplay. In 2020, he created Beak, Feather, & Bone, a world-building RPG that revolves around a society of anthropomorphic birds. The game was named one of Tabletop Gaming magazine’s “Best Games of 2020.”

Crumrine looks at game accessibility from a number of angles. He says cost presents an especially large barrier for people, as commercially produced games and accessories can come at a high price. In comparison, each game in the Possible Worlds online store is either free or low-cost, with prices running anywhere from $1 for a digital download to $10 for a physical copy.

He says game designers should also be “cognizant of the experiences and experience-levels of people other than yourself.”

Dating Sim artwork by Sam Mameli, Scene Thieves artwork by Pol Clarissou, Wishless artwork by Jimmy Knives
“I’ve been part of the hobby for years, so a game’s rules might feel accessible to me but still sound like absolute nonsense to someone who’s never played an RPG before,” says Crumrine. “Similarly, if I write a game that assumes a player comes from a certain culture or upbringing, I alienate players who don’t have access to those same experiences. Designing games that are accessible to as many people as possible is largely an exercise in identifying what prevents people from engaging with games in the first place and working to remove those hurdles.”

The pandemic adds yet another layer of complications for what to consider when creating games, something Crumrine and his fellow designers have confronted with things like alternate sets of Zoom-friendly rules and removing physical elements that only work in in-person group settings.

Game designer Tyler Crumrine
Crumrine says that in addition to making games affordable and replayable, he also designs games that model the kinds of behavior he wants to see in the real world. “Games where cold-hearted calculation takes a back-seat to interpersonal communication,” he says. “Because I think a world where we all treat each other better is possible, too.”

As he prepares to launch the Possible Worlds Kickstarter on March 23, Crumrine sees it as creating opportunities for the business and for creative professionals like him, who work on a freelance basis. He believes the subscription box will enable Possible Games to become more financially sustainable, and allow him to “champion other creators’ work in future bundles,” which can help them “transition game design from a hobby to a consistent source of income.” He also wants to commission more artists to illustrate games, providing them with fair rates and inroads to working in the industry.

“Ideally, the ‘Possible’ in Possible Worlds is as much about making success and stability possible for others as it is for myself,” says Crumrine.
Possible Worlds Games
possibleworldsgames.com