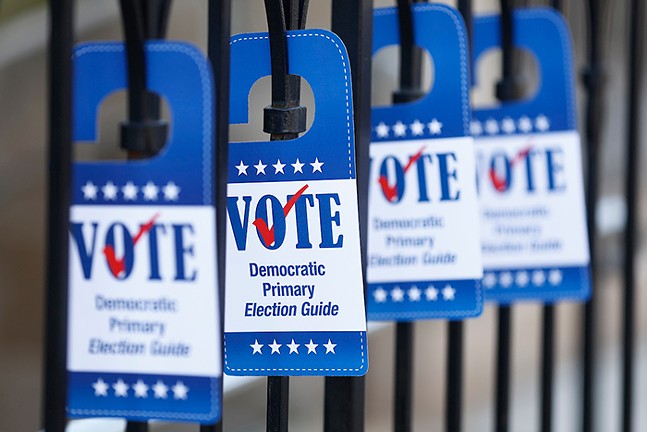 CP Photo: Jared Wickerham
What a time to be alive — and cover politics. “Unpredictable” doesn’t begin to describe the political landscape in 2022. Both the Republican and Democratic parties are in states of transformation. The value systems they uphold, and who they want to represent, are at the heart of what is at stake during this upcoming election cycle. While midterm elections are notorious for low voter turnout, the reality is that whoever comes out victorious in this year’s primary election will set the stage for a contentious battle in November 2022. The results of that general election could tip the balance of power from one side to the other — potentially shifting the political ideology of America forever.

Leading up to this primary, I’ve had the unique perspective and privilege of having interviewed many of the candidates on the Democratic tickets, as well as thought leaders who dissected the issues that Pennsylvanians want to know about during Pittsburgh City Paper’s weekly Instagram live show, After Hours.

Democrats find themselves in a tough spot: Trying to woo both moderate Republicans while also courting progressives, and standing up for collective human rights while acknowledging those of the individual. From incumbents like State Rep. Summer Lee, who is running for her current role in the state House as well as launching a bid for Congress against law professor Jerry Dickinson and attorney Steve Irwin, among others, to Pennsylvania’s Attorney General Josh Shapiro, the lone frontrunner on the Democratic ticket vying to be Governor, the tension is palpable.

The sheer number of people running for Congress is enough to make your head spin, both on the Democratic and Republican sides. The top three senatorial contenders include Pennsylvania’s Lt. Gov. John Fetterman, Congressman Conor Lamb, and State Rep. Malcolm Kenyatta of Philadelphia. Whoever secures the nomination — and it’s anyone’s guess at this point with a third of voters still undecided — will be possibly running against New Jersey-based daytime television personality, Dr. Mehmet Oz, or ex-hedge fund CEO, David McCormick. Former President Donald Trump has formally endorsed Dr. Oz. Whether that helps or hurts him remains to be seen.

Feeling overwhelmed? Fear not! Pittsburgh City Paper has you covered. Not only can you catch up on past episodes of After Hours to get to know more about the candidates and their platforms on a one-on-one personal basis, you can also check out this handy Democratic Primary Election Guide 2022 before you head to the polls on Tue., May 17.

Below, you’ll find side-by-side comparison charts of multiple races, including the ones mentioned above, as well as Pa. state House District 24, which pits incumbent Martell Covington against La’Tasha Mayes and Randall Taylor. You’ll meet the candidates for Lieutenant Governor: Austin Davis, who Shapiro favors, along with Brian Sims and Ray Sosa. And you’ll learn more about Pa. state House District 19 with Aerion Abney going up against Glenn Grayson.

Having interviewed so many of the candidates listed above, I asked a lot of them this same question: “Why vote?” With the level of apathy and hopelessness so many of us experience, mixed with a doomsday 24-hour news cycle, it can seem as though the political process is a fruitless one.

But, as they have in the past, candidates and thought leaders from around our community sounded the alarm that our vote is our voice. When we vote, things can change. They can progress or they can turn backwards. If we want to build a more equitable world, we have to show up. Not just every four years, but in every election, every time, and we need to bring our friends with us. Our collective power lies in our vote. We must protect it, preserve it, and expand this right to as many people of this nation as we can. Democracy is a fragile thing. Let us not forget that we, the people, hold the power to hold those in power accountable. They work for us. So let’s get started.• Josh Shapiro, the lone Democrat running for Pa. Governor
• Pennsylvania Lieutenant Governor: Austin Davis, Brian Sims, and Ray Sosa
• U.S. Senate: John Fetterman, Malcolm Kenyatta, Conor Lamb, and Alexandria Khalil
• U.S. House District 12: Jerry Dickinson, Steve Irwin, Summer Lee, William Parker, and Jeff Woodard
• Pennsylvania State House District 19: Aerion Abney and Glenn Grayson
• Pennsylvania State House District 24: Martell Covington, La'Tasha D. Mayes, and Randall Taylor
• Pennsylvania State House District 34: Summer Lee and Abigail Salisbury