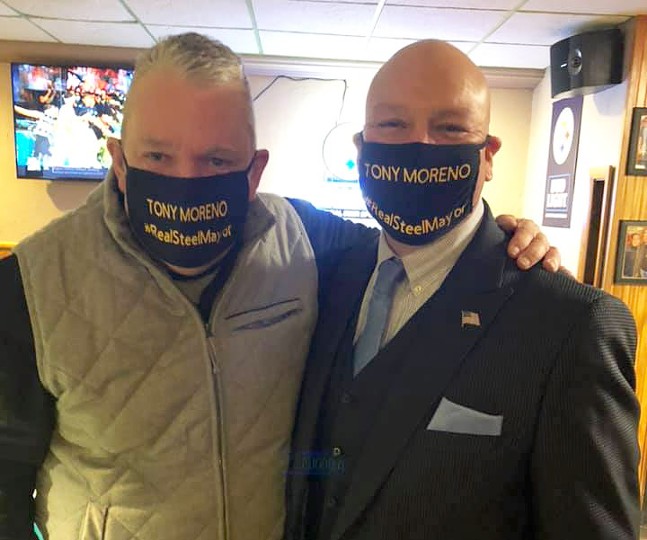 “The great President Donald J Trump also has a responsibility to protect this country,” tweeted Moreno in July 2019. “They want to make it socialist and hate America. They try to impeach him, falsely accuse him and turn against American values. That’s what I would have said. He speaks for me.”

Moreno told City Paper that those past tweets don’t represent his current support or policies he endorses, but the revelation has made a splash in the Pittsburgh political world. Allegheny County Democratic Committee members are currently voting on which candidates will receive the party’s endorsements, and the endorsement for Pittsburgh Mayor is between Moreno and state Rep. Ed Gainey. Both are running against incumbent Mayor Bill Peduto, who is not seeking the ACDC endorsement.

On Feb. 19, in a photo taken just a few days before CP’s report on Moreno’s tweets, Pittsburgh Democratic Committee Chair Kevin Quigley is seen wearing a Moreno campaign mask and posing with the candidate at Moreno’s petition signing event at the Moonlite Cafe in Brookline.

Considering that only committee members located within the city of Pittsburgh will vote on the mayoral endorsement, Quigley’s photo with Moreno could be influential.

In a statement, Quigley says that he and the leadership of the city’s Democratic Committee “adamantly disapprove of any statements supporting the actions of Donald Trump” and that members of the Pittsburgh committee “worked tirelessly to elect President Biden, and to put an end to the abuses carried out by Trump during the most ruinous presidency ever.”


If you were wondering if Tony Moreno, the Democrat running for Pittsburgh Mayor with a Twitter feed full of Trump praise, has a shot at winning the Allegheny County Dem committee endorsement, here he is with PGH city Dem Chair Kevin Quigley a few nights before my story broke pic.twitter.com/qKTQhiLEO3

Quigley refutes any assertion that he is publicly supporting any candidate and says he has “been committed to an open endorsement process.” He acknowledges the photo with Moreno and says, “I am of course in photos with many candidates, including Mr. Gainey, and even Mr. Peduto.”

In the past, Quigley has been at the center of some controversy. In 2019, he was behind the pro-Darlene Harris mailers that accused Peduto and now Pittsburgh City Councilor Bobby Wilson of trying to buy an election with “East End money.” Quigley faced calls to withdraw his name from a leadership post within the ACDC in 2018.

Quigley says that if Moreno is successful in receiving the ACDC endorsement, he will immediately convene a special meeting for the members to consider how they may address this in accordance with their bylaws. ADCD rules bar committee members from campaigning for or public supporting non-Democratic candidates.

In his statement, Quigley also accused Peduto of “actively pushing committee members to vote for Mr. Moreno,” even though Peduto decided to not seek the ACDC endorsement this year. The only other candidate seeking the Pittsburgh mayoral endorsement is Gainey, who recently received the endorsement from SEIU Healthcare, a former Peduto ally.

In a statement issued in January, Peduto said he would be withholding his name from the ACDC endorsement citing his opposition to Kass and the committee’s failure to implement reforms following Kass’ endorsement.

“While I have been endorsed by the Committee in the past, it would be hypocritical for me to call for an Open Primary for other races, but seek it for myself,” said Peduto in a January statement. “Therefore, I am withholding my name from the Committee’s endorsement process.”

“We are encouraging voters to cast a vote for Mayor Peduto on May 18,” said Sheaffer. “Since we are not pursuing the ACDC endorsement, the internal machinations of the Committee are not a priority to us right now.”