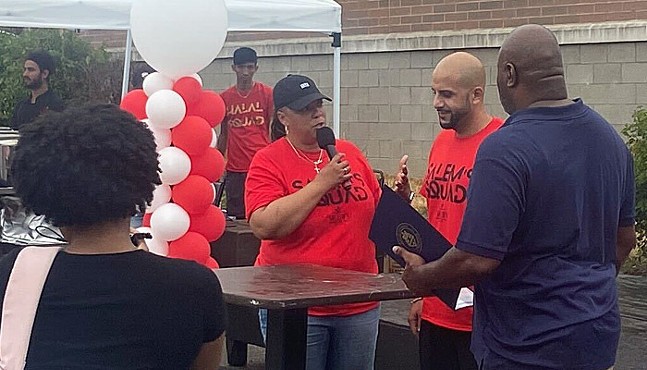 July 17th is now recognized as Abdullah Salem day in Pittsburgh. The declaration was presented to the iconic Pittsburgh vendor last weekend in recognition of his contribution to the community during a public ceremony at the site of his future store location in the Hill District.

Abdullah Salem is the owner of Salem’s Market and Grill in the Strip District, which was started by his father in 1983 under the name Salem's Halal Meats. Initially, Salem’s Father sold mainly to restaurants, businesses, and schools, but his son decided to extend their mission to the entire community of Pittsburgh.

“Many people do not know how Massaud Salem got started,” said former State Rep. Jake Wheatley, who presented the declaration. “Salem’s father Massaud began to search for halal meat, and he could find none, so he decided to do something about it.”

Other local officials added to the praise.

“My family and I love Salem’s Market and Grill,” says Michelle Gainey, Mayor Ed Gainey’s Wife and first lady. “We are absolutely excited that they are moving into the Hill District.”

In 2013, the building was the home of Shop n Save, the Hill’s first full-service grocery store in years, but after just six years it closed.

Earlier this year, Salem’s Market and Grill got approval from Hill District Residents and the URA Board to open their second location on the Hill, set to open next spring.

“With the Strip District being so close to the Hill, we already had great relationships with residents and customers. So, when this opportunity was presented to us, it was a no-brainer,” says Abdullah. “We appreciate the URA Board, but most importantly the Hill District residents for accepting and welcoming us into their community.”

Alex Moser, chief marketing officer for Salem’s, said during his remarks the new store is intended to meet a pressing need in the community.

“The Hill has been a food desert for too long,” he said. “We recognize the need for this community to have a local grocery store. This is beyond dollars and cents; this is all about providing healthy food to a community that more than deserves it.”

“The market will include a restaurant and coffee shop,” says Moser. “We will also be having cooking classes that will be open to the community. We want to connect with the community and the only way to do that is to be a part of it. We want the community to feel like it’s their store.”

Abdullah says his intentions for the new store go beyond simply being the only grocery store in town.

“This community chose us to be a part of their community, not the other way around. We are partnering with local black organizations and vendors so that we can not only welcome them in the building but are also sharing the building as well.”