Photo: Carrie Schneider
An Untitled Love by Kyle Abraham and A.I.M
After over a year and a half of dance performances either being canceled or moved online due to COVID-19, various Pittsburgh companies are making a return to live shows. Whether you’re looking for ballet or modern, the remainder of 2021 and into 2022 will see seasons full of classic renditions and premieres at venues all over the city.

confluenceballet.org
Confluence Ballet will soon launch its inaugural season, but before that happens, the young Pittsburgh company will present Sips Soirée, a fundraiser at Dreadnought Wines described in a press release as “helping the company achieve their mission to create a high caliber, diverse, and inclusive ballet company that prioritizes the experiences and well-being” of its artists. The fundraiser will include wine tastings and cocktails, as well as raffles. 5:30-7:30 p.m. Fri., Aug. 27. Dreadnought Wines. 3401 Liberty Ave., Lawrenceville. $55. dreadnoughtwines.com

In November, the nonprofit company, which was founded by Moselle Haney in 2020 as Confluence Dance Theatre, promises to burst onto the Pittsburgh dance scene when it presents Emergence at the Pittsburgh Playhouse. The performance includes a new restaging of Firebird, Spirited Syncopations by choreographer Durante Verzola, and a world premiere by Dan Karasik.

The season will continue with two performances at the August Wilson African American Cultural Center. In March 2022, the venue will host Versatile Voices featuring Sur le Fil by choreographer Penny Saunders of Grand Rapids Ballet. This will be followed in May 2022 by the company’s productions of two classics, Carmen and A Midsummer Night’s Dream.

“We are so excited to present our 2021/2022 season and hope that the Pittsburgh community, the dance community, and dance enthusiasts globally are inspired by our performances,” says Confluence artistic director Courtney Streeter. "We hope they realize that professional quality ballet does not have to come with the price of your dancers’ well-being.” 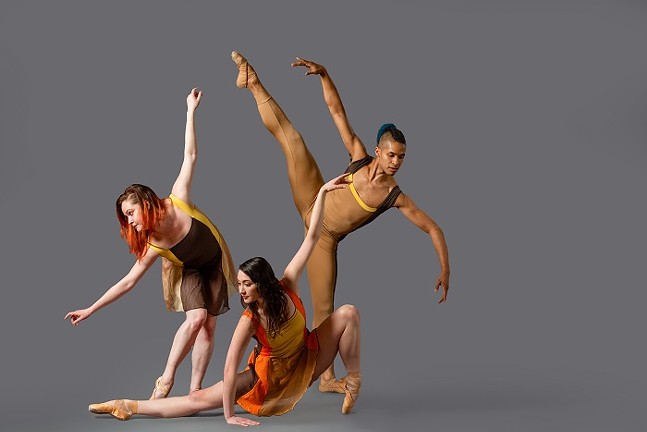 textureballet.org
Texture Ballet Company will return to the stage with outdoor and indoor performances throughout 2021 and 2022. Texture artistic and executive director Alan Obuzor says audiences can expect a mix of old and new works, including a piece that “explores different ways of using shadows and light,” as well as one set to the music of rapper Macklemore.

The Pittsburgh dance company kicked the season off on July 29 at South Park Amphitheater and will return to the location on Sun., Aug. 29 to premiere new a work by dancer Madeline Kendall, described on the Texture website as taking inspiration from surrealist artist Salvador Dali. The evening will also feature excerpts from Laurie Blue, a 2016 production by Obuzor and Kelsey Bartman, as well as bits from the Tom Waits-inspired show 'til the wheels come off by Christopher Bandy.

Texture will also return to its regular performance venue the New Hazlett Theater for In the Light in November and Reimagine in April 2022. In the Light showcases new and old works, including Eclipse, which Obuzor says is set to the “stirring music” of the late singer/songwriter Eva Cassidy. Reimagine will close out Texture’s season.

“We are very excited to return to the New Hazlett,” says Obuzor. “Returning there fills us with those wonderful feelings one gets when coming home after being gone for too long. Anticipation, excitement, familiarity, memories, and more. The connection and the magical moments that can happen between performers and live audiences is like nothing else.”

TrustArts.org/DANCE
The Pittsburgh Cultural Trust recently announced that the Pittsburgh Dance Council would celebrate 51 years with a host of shows starting in November.

In a press release, Randal Miller, director of dance programming and special projects for the Trust, promised the upcoming season would feature a “diversity of artists to entertain, connect, challenge, and reframe the understanding of our community as it relates to the content of these works and dance as an art form.”

“It is an honor to support dance through this long-standing series and the 51st season will continue this legacy by showcasing some of America's most established and respected movement artists alongside emerging international companies,” says Miller, adding that audiences can expect large-scale, outdoor, and site-specific work.

He adds that the lineup includes artists whose performances were canceled due to the pandemic and several new ones, including two U.S. premiere engagements.

The season kicks off with An Untitled Love by Pittsburgh native Kyle Abraham and his company A.I.M, done in partnership with the Kelly Strayhorn Theater. Taking place at the Byham Theater, the work is described as drawing from the catalog of best-selling R&B musician D’Angelo, and “pays homage to the complexities of self-love and the Black love, while serving as a thumping mixtape celebrating our culture, family, and community.” 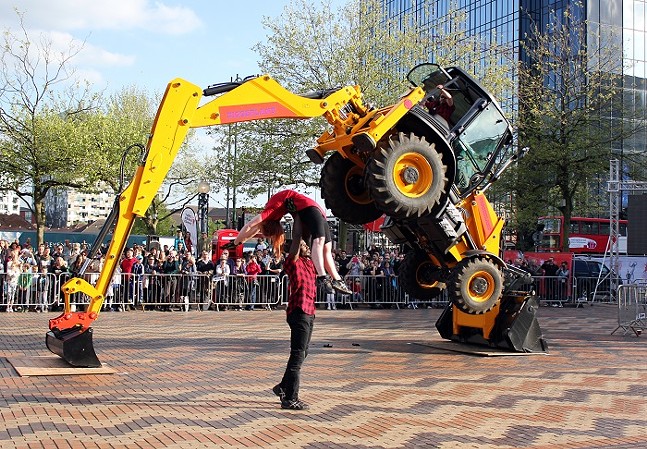 Photo: Courtesy of Motionhouse
Torque by Motionhouse
Other highlights include Motionhouse, a company from the United Kingdom specializing in ambitious productions that “integrate athletic physicality, powerful narrative, and an emotive sound score, taking inspiration from common human concerns and our connection to the world in which we live.” For the U.S. premiere of Torque, set to take place at the 2022 Three Rivers Arts Festival, Motionhouse dancers will exhibit their strength and agility while performing on a variety of construction vehicles.

The Pittsburgh Dance Council will also present the U.S. premiere of BLKDOG by another U.K. company, Far From The Norm, and BIG FIVE-OH! by Pilobolus, as well as Complexions Contemporary Ballet’s Bach 25 and Woke.