“The hardest part is keeping your balance.” 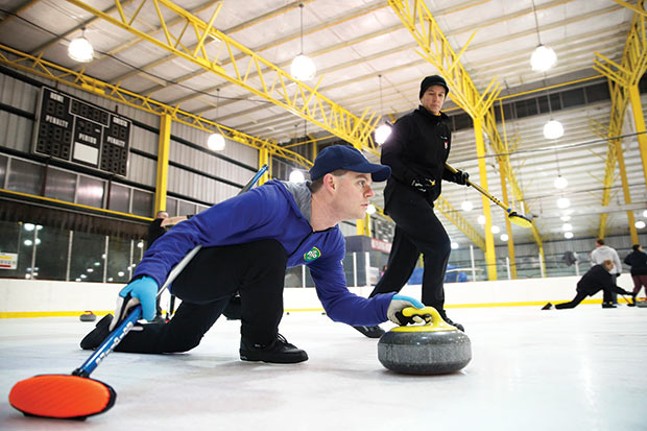 In the next couple of weeks, odds are many Pittsburghers are going to be obsessed with curling. The winter sport, which is basically shuffleboard on ice, was a U.S. ratings bonanza during the 2014 Winter Olympics in Sochi, Russia, and there are dozens of opportunities to cheer on the Stars and Stripes in the quest for curling gold this year. In the ongoing 2018 Winter Olympic Games, held in PyeongChang, South Korea, American curling is represented by a men’s team, a women’s team, and a mixed-doubles team. Curling matches are televised multiple times a day, and competition lasts the entire two weeks of the games.

And if locals do fall in love with curling during the Olympics, the Pittsburgh Curling Club wants to remind people they don’t have to wait another four years to experience the game.

The Pittsburgh Curling Club meets every Saturday night from fall through spring at the Robert Morris University Island Sports Center, on Neville Island. The club started in 2003 and utilizes covered outdoor ice rinks. There are more than 90 current members of the club, and club president Steve Buffington is hoping this year’s Olympic Games will generate more interest.

Buffington says curling with the club isn’t just for die-hards; it’s open to anyone who wants to try. “Our members can play as serious or as recreational as they want,” says Buffington. “We have pickup games late on Saturday nights, and some members participate in tournaments across the region.”

The rules of curling are relatively simple. Players take turns sliding granite stones on the ice toward a series of drawn rings called “the house.” Each team has eight stones, and the rink is 138 feet long. The goal is to get as many stones as close to the center of the house as possible, like shuffleboard or bocce. For each throw, two teammates can also move in front of the thrown stone and sweep the ice with brushes, which changes the trajectory and speed of the stone.

“Brushing delays when the stone slows down,” says Buffington, describing how the sweeping warms up the ice’s surface and allows the stone to slide farther. “Sweeping can also keep the stone on a straighter trajectory.”

Throws can be used for defense, called a guard, or for offense, a softer throw aimed right at the center. And there is plenty of action in terms of stones colliding to push other stones out of scoring positions. When City Paper visited, the ice rink at the RMU sports complex was filled with the satisfying sounds of sliding stones, followed by loud cracks as the stones collided. Buffington says that curling is equal parts skill and strategy, and the best teams excel at both.

Craig Micklethwaite, an engineer from Moon Township, has been playing with the Pittsburgh Curling Club for two years. He told CP that he was intrigued by curling after watching it on TV and was excited to try it because it was “something unique and different.” He said he has enjoyed playing, and is still learning the complexities of curling.

“The hardest part is keeping your balance,” says Micklethwaite, referring to the sliding that comes when players throw the stone down the ice. “There are a lot of things to think about.”

And Buffington wants to calm any anxieties potential curlers might have about trying a sport played on ice. He says curling ice is covered in water droplets before play. These drops freeze and give the ice texture, which makes it easy to walk on, in addition to making the stone slide better. (Players actually wear a plastic slider on one shoe, so they can slide on the ice before releasing their throw.) Buffington also says players who are unable or uncomfortable performing a slide throw can use a throwing stick, like in shuffleboard.

Buffington also wants to ease concerns people may have about frigid playing conditions. The rink at the RMU facility can get cold in the winter months, but the club is close to securing financing for a new, indoor curling facility in nearby Stowe Township. Buffington says the new facility will be open all week, and will be kept at comfortable temperatures, on and off the ice. He says construction for the new facility could start in the spring, with an anticipated opening in the fall.

Buffington is also excited about the improved ice conditions of the new facility. Currently, the RMU curling rink is shared with recreational ice hockey, so the ice can be slanted in some spots. “Sometimes, the ice here can be extra curly,” says Buffington. “Curling should be like playing pool — you want it to be dead flat.”