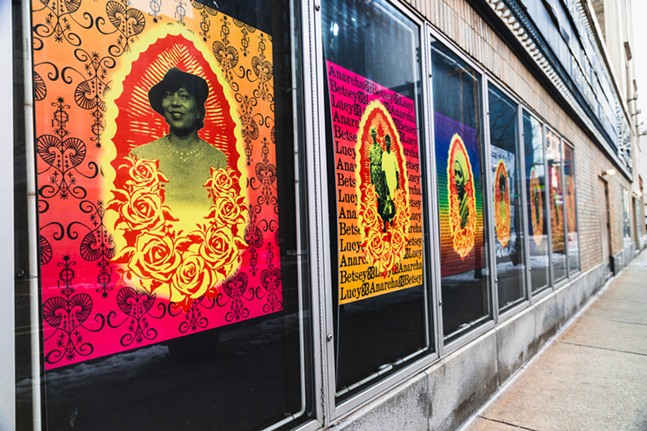 Photo: Courtesy of the Pittsburgh Cultural Trust
Art by Bekezela Mguni, part of 202021: a new constellation, curated by Tereneh Idia
Spring gallery crawls typically call to mind meandering through art-filled streets as dusk turns to evening. While such an in-person event would not be safe this year, the Pittsburgh Cultural Trust is offering a new, digital take on its crawl experience with Gallery Crawl in the Cultural District: Virtual Edition.

The virtual crawl features three virtual stops, each of which offers several vantage points from which attendees can explore artists’ works, including exhibitions, performances, and screenings in galleries, storefronts, and restaurants throughout Downtown Pittsburgh's Cultural District. Behind-the-scenes interviews and live discussions are also available.

The first crawl stop is a deep dive into 202021: a new constellation, an exhibit curated by fashion designer and Pittsburgh City Paper columnist Tereneh Idia. The Trust admired Idia’s art and approached her to curate the exhibit, for which they gave her creative freedom in choosing the theme and artists she wanted to present.

“I really wanted to make it something that was focused on Black art and Black artists to be able to have a celebration of Black Pittsburgh in a very central location, especially in light of some of the reports and commentary around Pittsburgh as being the most livable city — most livable for who — and about wanting to celebrate the joy and the creativity of Black Pittsburghers,” Idia says.

This is Idia’s first curating experience, and as she sought out artists for the exhibit, she tried to create a variety in not just medium — from textiles to digital art to painting — but also in age and experience. She gave the 12 artists in the exhibit freedom in the pieces they sent to her, creating a collaboration between what the artists wanted to showcase and what the exhibit had space for.

The art fills spaces in the Cultural District that were previously empty or made obsolete by the pandemic, such as sign space for performances that were canceled or postponed. Idia’s plan was to not only “activate and engage” those spaces, but to create opportunities for visual artists who have also been hit hard by the pandemic.

“I really want people to feel a sense of the amazing variety of Black artists and Black creativity that exists in Pittsburgh that is not always seen or celebrated together,” Idia says. “And not that it's a separate experience, but it is fundamental to Pittsburgh's experience and Pittsburgh's creativity.”

The exhibit draws its name from the stars that are the connecting points of a constellation, but also the dark space between stars, which attendees traverse in the space between the art pieces. Together, the art, artists, and attendees form a new constellation, and since modern catalogues typically include a number in a star’s name, Idia chose 202021 for this one.

“I really wanted to have people think about just the energy and the experience and what feelings they have as they walk through and see the artwork,” Idia says. “And that in of itself is creating like a celestial body or as part of the cosmos. So I wanted to celebrate that.”

The exhibit became fully available in February, and while it formally ended March 31, people can still traverse the exhibit through the virtual exhibition and time-lapsed video walkthrough, both of which became available online March 26 as part of the Crawl. A lunchtime conversation will occur April 9 at noon between Idia and other featured artists. 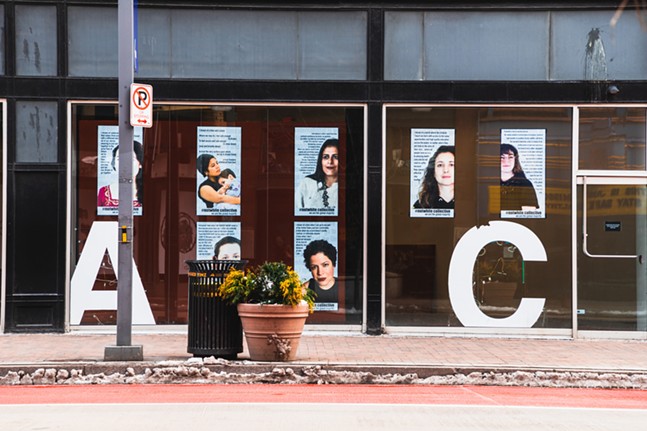 Photo: Courtesy of the Pittsburgh Cultural Trust
#notwhite collective's We Are The Global Majority exhibit will fully open June 4, and their Crawl Stop will become available May 14.
The second Crawl Stop is a local artist spotlight that features more than 15 local artists. Two live-streamed events will offer attendees behind-the-scenes visits, live discussions, performances, and opportunities to purchase works from the artists. The events will become available April 16 and 30, with more information to come about participating artists.

The third Crawl Stop features #notwhite collective’s We Are The Global Majority exhibit, which is currently on display in its first phase as window clings on SPACE gallery on Liberty Avenue. The collective, a group of 13 female multi-racial and multi-cultural immigrants or descendants of immigrants, rejects colonialism and seeks liberation and self-exploration through sharing space and stories.

#notwhite collective’s Crawl Stop will become available May 14, giving people time to get to know the collective’s members and art before their in-person exhibit We Are The Global Majority opens inside SPACE on June 4. The exhibit will be the Trust’s first in-person gallery exhibit since the start of the pandemic.

All three Crawl Stops will be online at least through May, giving people time to explore, meander, and circle back as new Crawl Stops become available.

“I hope that [attendees] engage with it,” says Terri Bell, the Pittsburgh Cultural Trust’s vice president of strategic partnerships and community engagement. “I hope that they look for and find ways to support these amazing artists, who are a part of all three stops and really see our local arts community for all that it is and especially these very specific voices that are included in this call.”