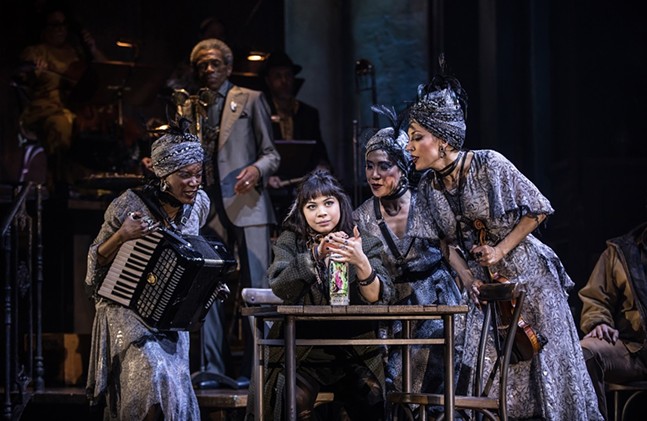 Photo: Matthew Murphy
Original Broadway cast of Hadestown
The Pittsburgh Cultural Trust theatrical season might be on hiatus due to the coronavirus shutdown, but the arts organization has not given up hope on bringing new shows to the city.

Today, the Trust announced a new lineup of eight PNC Broadway touring shows set to begin August and continue into 2021. The announcement comes after the Trust was forced to delay many events, including its 2020-2021 PNC Broadway in Pittsburgh season announcement, which was originally scheduled for mid-March.

“We received overwhelming feedback from Broadway audiences that they couldn't wait to learn about next season's shows,” says Marc Fleming, vice president of marketing, communications, and Broadway programming for the Trust, in a press release. “It’s clear that the arts offer a guiding light in dimmer times and I think everyone is looking forward to gathering to see the curtain rise again in the Cultural District.”

Photo: Little Fang Photo
Oklahoma!
For the first time, the series will boast two Tony Award-winning Best Musicals, Hamilton (in case you couldn't get tickets last time it came to town) and Hadestown, the Anaïs Mitchell show inspired by the ancient Greek myth of Orpheus and Eurydice. Also in store is the 2019 Tony Award winner of the for Best Revival, Oklahoma!, as well as My Fair Lady, Ain’t Too Proud, a biographical musical about Motown group The Temptations, and The Cher Show, a decades-spanning musical that traces the life and times of Cher.

Audiences can also expect a run of Pretty Woman: The Musical, based on the hit 1990 film starring Julia Roberts and Richard Gere, and writer/director Aaron Sorkin’s adaptation of Harper Lee’s novel To Kill a Mockingbird, as well as Beautiful – The Carole King Musical and Blue Man Group, both of which have previously staged in Pittsburgh.

Tickets and subscription packages are now available for the upcoming season.