CP photo: Jared Wickerham
Complete Streets infrastructure in Hazelwood Green
This year’s Pittsburgh city budget proposal is as contentious as ever. Not only has lack of federal funding contributed to a huge hole in the 2021 budget, but activists have been calling for cuts in funding for Pittsburgh police, and what that money would instead be spent on community services.

And the contention isn’t slowing down. Pittsburgh City Councilor Corey O’Connor (D-Squirrel Hill) will introduce a budget amendment on Mon., Dec. 14 that aims to allocate $4.1 million away from the Mon-Oakland Connector transit proposal, and move those funds to affordable housing, support for small businesses, and bike-and-pedestrian friendly infrastructure improvements in Hazelwood.

The Mon-Oakland Connector proposes infrastructure improvements between Oakland and Hazelwood in order to improve mobility between the two neighborhoods, whether traveling by foot, bike, scooter, shuttle, or even autonomous shuttle. It has been met with strong opposition by transit advocates and residents of Greenfield’s Four Mile Run neighborhood. The city has planned to dedicate $23 million over several years to complete the project.

O’Connor says wants to reallocate the $4.1 million of the funds to the city’s Housing Opportunity Fund programs, the Urban Redevelopment Authority’s small business development and support programs, the Avenues of Hope Initiative for infrastructure improvements in Black neighborhoods, as well as still supporting the some proposals of the Mon-Oakland Connector like the Construction of the Sylvan Avenue Trail connection and other Complete Streets work in Hazelwood.

He says that there are too many Pittsburghers “living in fear of losing their housing” and too many establishments that have closed permanently during the pandemic to not provide more funds to housing and small business.

“It is the City's responsibility to do everything we can to offer protection to those hit hardest by the economic devastation caused by the pandemic,” said O’Connor in a press release. “We need to look out for those who are most vulnerable every year, but especially in 2021.” 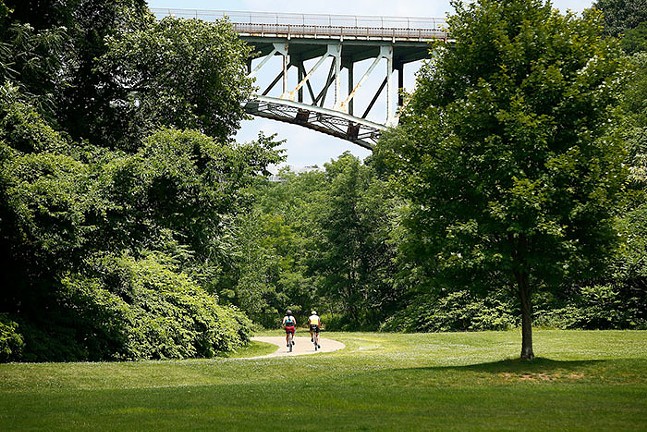 CP photo: Jared Wickerham
The Junction Hollow trail in Schenley Park, where the Mon Oakland Connector is proposed to run through
In the past, the city has defended the cost of the Mon-Oakland Connector since the spending is a capital project that won’t be affected by any operating budget shortfalls, and that many users will can use the trail, not just the proposed autonomous shuttles.

Pittsburgh Mayor Bill Peduto spokesperson Tim McNulty says the mayor’s administration “has been in talks with the Councilman and we expect to reach an agreement on his proposals by Monday.”