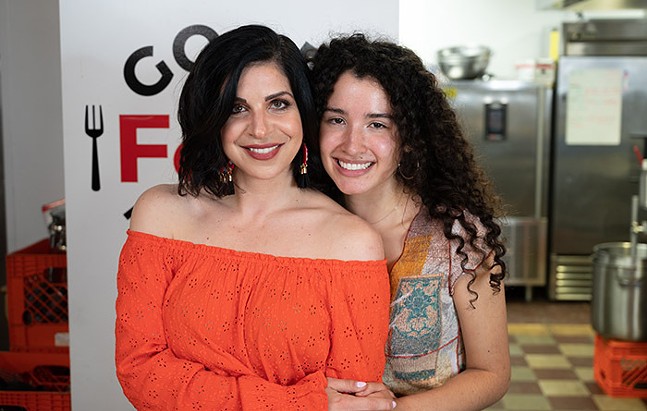 Courtesy of Heating Up
Natalie Bencivenga (left) and Leandra Mira (right)
The popularity of cooking shows cannot be overstated. With programs like Chopped, Top Chef, and the overall existence of the Food Network, we know people love to watch others cook. Vegan cooking shows have struggled to gain traction, but that might change with Heating Up, a new local show coming to YouTube.

Hosted by Pittsburgh journalist Natalie Bencivenga (who has also partnered with Pittsburgh City Paper) and climate activist Leandra Mira, Heating Up sets out to combine a climate consciousness with delicious vegan recipes over its 10-episode arc. Each episode will have a guest at the table who will engage with the hosts in conversation about climate change and social justice.

The first episode of Heating Up is set to premiere on August 17.

Bencivenga, who is plant-based herself, says it was important that the program showcased vegan food.

“We thought by making plant-based, accessible meals that anyone can make at home using simple, affordable, whole-food ingredients, we could demystify cooking this way and introduce people to a new way of thinking and relating to their food," says Bencivenga. “We also want people to activate, not just be a passive observer of the show. This is something anyone can do to help engage in environmental justice without feeling intimidated.”

Some of the guests planned for season one are State Representative Summer Lee, 412 Food Rescue CEO Leah Lizarondo, and Greg Austin, project manager at Good Food. The show is filmed at Sprezzatura, which is also the home of Good Food PGH in Millvale.

Bencivenga and Mira, a 19-year-old activist who has worked on addressing climate change for the past two years, met back in 2019 when Mira was organizing weekly climate strikes at the Pittsburgh City-County Building. Bencivenga describes herself as a “socially conscious journalist” who uses her platform to bring light to issues faced by underserved communities. The two developed a friendship over the years based on their shared passion for social change and decided to embark on this project.

Heating Up will set out to show viewers that their food choices have an impact on the environment at large. There will also be a focus on health as all recipes are reviewed by Dr. Natalie Gentile, a medical consultant and primary care physician.

“I hope this show connects people in our region with organizations, movements, and ideas that they can become a part of. If people end each episode feeling a little more hopeful and they feel motivated to explore the ways they can incite revolutionary change in their own lives then that’s the best thing that could ever happen," says Mira. “I’ve also always wanted to work on a project that turns into somewhat of an archive of Pittsburgh, this city I’m in love with for its amazing people.”