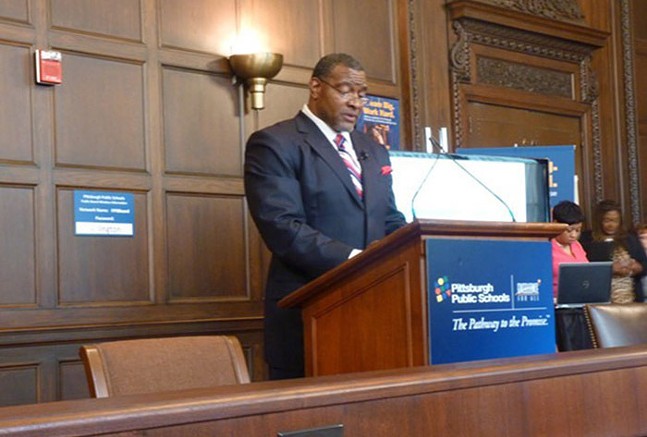 “We are thankful for the work of the State Ethics Commission. This report confirms much of what we suspected,” says Lamb. “The Pittsburgh Board of Public Education must now make appropriate changes to leadership to allow the district to get back to the important business of focusing on student achievement. City families and children deserve nothing less.”

Lamb’s comments are a departure from PPS board president Sylvia Wilson’s statement that a change in leadership would not make sense due to existing challenges due to the pandemic. The PPS board has the authority to fire Hamlet and hire a new superintendent.

The ethics commission’s report, released on Aug. 26, found that Hamlet negligently received travel reimbursements and payments for appearances related to his job, and incorrectly filed financial documents. According to the ethics commission, Hamlet utilized leave for days when he was absent for non-district-related travel and carried over unused vacation and personal days for certain district employees, including himself, despite his contract prohibiting it.

The commission also found that a technical violation of the Ethics Act occurred when Hamlet accepted honoraria in recognition of appearances, speeches, or presentations directly related to his role as superintendent. David Berardinelli, the attorney who represented Hamlet in the Ethics Commission Inquiry, notes that Hamlet’s contract allowed him to receive such honoraria, which he says is why the commission labeled Hamlet’s actions as a “technical” violation.

While Hamlet denies having committed a violation of the Ethics Act in regards to his trip with The Flying Classroom — a supplemental PK-12 STEM+ company based in Miami, Florida — he “agrees that if this matter went to hearing, the Investigative Division could, by circumstantial evidence, meet the requisite evidentiary standard and convince a fact finder that he violated [the Ethics Act].”

To close the case without further action, the Ethics Commission directed Hamlet to pay $2,908.89 to PPS for negligent record keeping, $3,250 to PPS for the honoraria he received — for which he is also directed to arrange for the district remit these payments to Pittsburgh Promise — as well as $1,000 related to investigation expenses and $750 for technical errors on paperwork. According to a press release from PPS, Hamlet has already written the checks for $2,908.89 and $3,250.