DJCoffman
Gisele Fetterman, immigration advocate and founder of the Free Store in Braddock, has a habit of cutting off her husband's head. At 6 feet and 8 inches tall, her husband John (who just happens to be the lieutenant governor of Pennsylvania) hovers over almost everyone he meets. When he's standing next to Gisele in photographs, however, he looks like a giant. So it's become a running joke on social media for her to crop off his head.

🏆 Best Pittsburgh Power “Couple” award for Best of PGH ... wait until everyone finds out I’m really the brains of the operation and @JohnFetterman is just the arm candy 💁🏽‍♀️🙄. @PGHCityPaper ❤️❤️ pic.twitter.com/hEH2qBkhft

Scottdale artist D.J. Coffman, who truly has an exceptional gift at drawing people, took Gisele's gag and illustrated it into a wonderful cartoon of the famous local couple, complete with a headless husband.

Coffman is one of 35 artists who created a black-and-white illustration for Pittsburgh City Paper’s Over-the-top Completely Ridiculous Yinzerrific Coloring Book, a benefit for both CP and the artists involved as a response to revenue lost due to the coronavirus pandemic. The artwork includes local landmarks, legends, and — yes, Pittsburghese, in a wide variety of artistic styles.

And instead of accepting money for himself, Coffman asked if he could donate the proceeds to a charity of Gisele's choice. CP talked to Coffman about his portrait of the Fettermans for the coloring book, his project 7x7 Comics, and traveling back and forth from Westmoreland County, where he lives with his wife Aleasha, and Pittsburgh, where he still visits frequently to visit some of their favorite haunts, Prestogeorge Coffee and Phantom of the Attic Comic Book Shop. 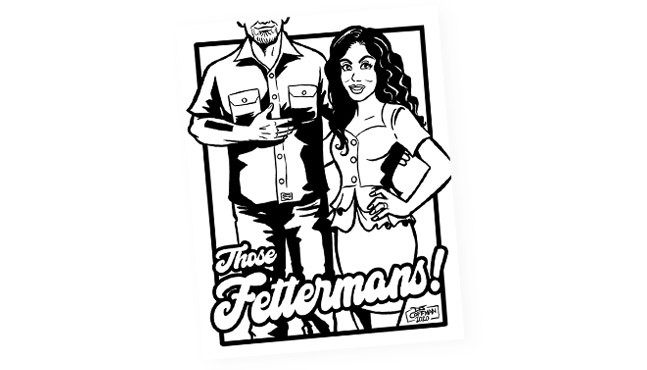 Can you tell me about the process that went into illustrating your Coloring Book submission of the Fettermans? I'm a big fan of the Fettermans, so it was a no-brainer for me. I've drawn them before at an old Toonseum fundraiser. It's not hard to draw awesome people. I drew it entirely on my iPad Pro in the Procreate art program. Same approach as a traditional illustration, starting with a rough sketch layer, then going to tighter "pencils" and a final layer for the thicker ink lines. The pose was easy because Gisele loves to post pictures that cut off poor John's head. The curse of the big tall guys!

You've asked us to donate your share of any proceeds from the coloring book to For Good PGH. What led you to make that decision?
As far as donating my proceeds to charity: I feel very fortunate to have been able to work and maintain an income through this pandemic, and I know a lot of nonprofit orgs who have been hit hard due to not being able to hold their fundraisers or day-to-day business. Nonprofits and NGOs, I believe, are critical to a functional society. In this specific case, I reached out to Gisele Fetterman and asked for a nonprofit of their choice. She initially told me they wanted me as an artist to keep any money because they feel supporting artists is super important right now, but after I told her my situation, she suggested it go to her For Good PGH, and they can earmark it for the therapist working to support Black mental health needs which can help offset the cost for some of her clients. So be sure to get your coloring book or 10, so we can help City Paper and a great nonprofit in Braddock!

When did you first know you wanted to become an artist?As far back as I can remember holding a crayon when I was 3 or 4 years old. When I was 11, I had the epiphany while reading G.I. Joe comics that somebody actually draws them, so I knew at that very moment that was what I wanted to do.


What’s your favorite color and why?Definitely orange. It was the color of my old VW Bus. And beyond that, it's the favorite color also of my favorite designer, Aaron Draplin of the Draplin Design Co.


I see that you work with lots of different mediums. What’s your favorite style to work in? I prefer to work digitally these days on my iPad Pro and Procreate art program. I would say the past three years, 90% of my work is done digitally.


I see lots of comic book designs in your work. How did you get into this style?Since grade school, I've loved comics and cartoons. I think what drew me to comic books and strip illustrations was the idea that anything at all was possible on the page. Unlike a big Hollywood budget movie, fancy sets and movie stars, with comics, all you need is the pencil and paper, and the ability to draw. So this is what I've spent most of my life doing. I did it full time for 13 years, illustrating several independent comic books for publishers and writers. I finally settled back into a day job at spreadshop.com, because in the comics industry, there really are no benefits. Even though I went back to a day job, I still draw comics all the time and pick and choose the freelance work I want to do.

Who’s your favorite superhero?If I had to pick just one, I'd pick Captain America, mainly the run by Mark Waid and Chris Samnee.


Do you believe artwork has the power to heal?I know that for sure. Especially comic books and sequential story telling. Much like writing music or lyrics, you have the ability to share your own story if you wish and read and understand different points of view.
click to enlarge 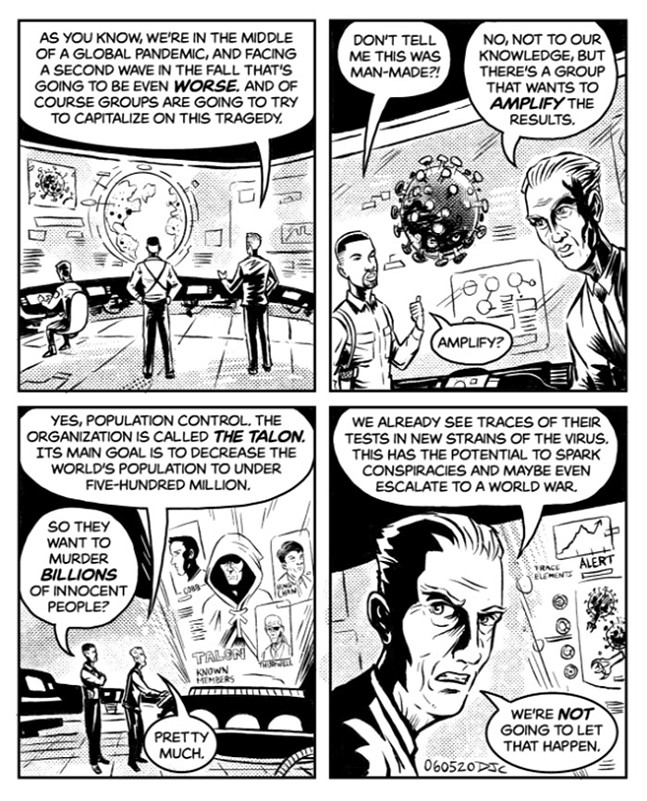 A panel from Secret Forces by D.J. Coffman
Even though you now live in Scottdale, you remain a big part of the Pittsburgh comics art scene. Are there any emerging arts and culture spots, post-pandemic, you recommend our readers keep an eye out for?
Post-pandemic, people may not know we have like five comic conventions per year here! Maybe more than any other city in the USA. Pittsburgh is truly a "comic book" town. Great comic shops to check out and support: Eide's Entertainment Downtown, Phantom of the Attic over in Oakland, New Dimension over at the Waterfront, and South Side Comics in, well, the South Side!


And I encourage everyone to subscribe to CARTOONIST KAYFABE on Youtube. Run by Pittsburgh's own award winning comic creator superstars (but very humble about it!), Ed Piskor and Jim Rugg. They interview some of the top creators in comics, do nerdy deep dive book reviews, and really encourage other artists and writers to "MAKE MORE COMICS!", and of course "READ MORE COMICS!" Everyone who is anyone in the comics field is now watching Kayfabe, and it's based right here.


What's next for you?Right now I'm drawing a daily adventure strip Monday through Friday called Secret Forces which you can read on Instagram (also available on the Webtoon mobile app). I also head up a Pittsburgh area comic creator collective, 7x7comics.com where we have seven different local creators making seven different creator-owned comics. Check that out! Everyone should read more comics!!! (and make more comics if you can!)


Digital copies of the Yinzerrific Coloring Book are $20, and print copies are $25, and can be pre-ordered at pghcitypaperstore.com. Half of the proceeds of each copy get split evenly between each of the 35 artists who created artwork inside each book.