Pittsburgh Coloring Book artist profile: Brian Gonnella and his portrait of 'The Strongest Man in the World' 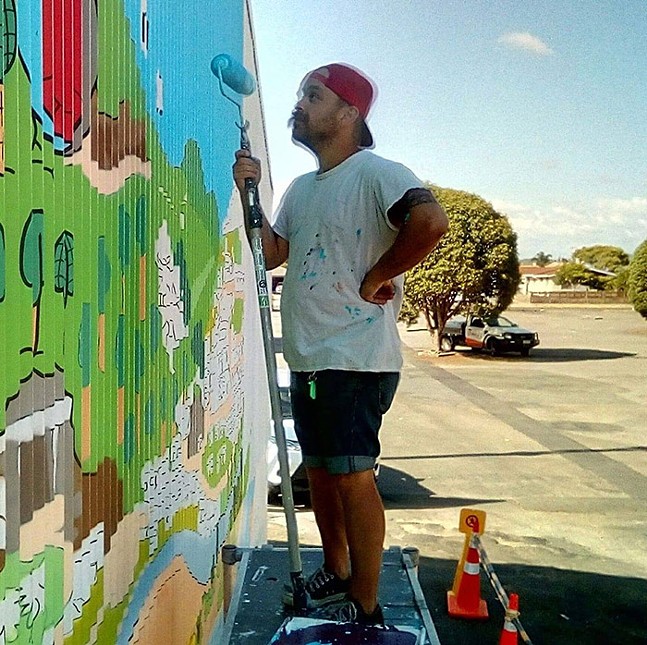 Photo: Nicholas Nickelby
Brian Gonnella working on a mural in New Zealand
You can find Pittsburgh-based muralist and graphic designer Brian Gonnella’s artwork on walls as far away as New Zealand. His work is colorful, fun, and even Rick Sebak-approved. When he painted a sweet mural of the local icon holding up a sandwich and posed in a yoga position above floating pierogies and a banner reading "Zen of Yinz" a few years back, the great Sebak himself reshared it and got a selfie with the artist.

Gonnella is one of 35 artists who created a black-and-white illustration for Pittsburgh City Paper’s Over-the-top Completely Ridiculous Yinzerrific Coloring Book, a benefit for both CP and the artists involved as a response to revenue lost to the coronavirus pandemic. The artwork includes local landmarks, legends, and — yes, Pittsburghese, in a wide variety of artistic styles.

When Gonella isn’t traveling, he organizes and works on group projects throughout the city, including a yearly mural project he started back in 2017, featuring a rotating group of street artists who paint a mural on the exterior of Spirit in Lawrenceville. This year, the event has returned as Spirit Walls: Black AF Edition, organized by Gonnella and Jerome "Chu" Charles (another artist in the coloring book!)

Pittsburgh City Paper spoke with Brian about his submission of Pittsburgh wrestler Bruno Sammartino, once called “The Strongest Man in the World," who held the WWWF (now WWE) World Heavyweight, and what it’s like creating temporary artwork all over the globe.

Brian Gonnella's coloring book page of Bruno Sammartino
When did you first know you wanted to become an artist?
I always was making art in some capacity. I was voted most artistic in my graduating high school class, did graffiti, did flyer art for punk bands I was in, etc. But I didn't "know" I wanted to make a living (or try to) as an artist until after I graduated college in 2009.

How long have you been painting murals and illustrating?
I've been refocusing and [working on] murals since 2016, obviously some form of that was happening during my younger years doing graffiti, but I didn't revisit mural making until about seven years into my "legitimate" art career.

Can you tell me about the process that went into illustrating your Coloring Book Bruno Sammartino submission? Why was choosing an Italian-American so important to you?
I wanted to showcase a character from Pittsburgh's Italian-American community (which does exist! but is very smol) because I too am Italian-American. I choose Bruno Sammartino, a professional wrestling legend, because 1.) he looks like he'd be fun to draw/color 2.) he had an incredible life, including fleeing Nazi-occupied Italy as a child and 3.) he was buds with Andre the Giant. All of that is pretty cool, and I don't think a lot of Pittsburghers remember this guy, so I wanted to honor him a bit.

You’ve been able to travel all over the world with your artwork. Do you have any advice for artists just starting out on how to market yourself and find these opportunities?
Never stop emailing and keep your contact list intact. Persistence is crucial. There are a lot of artists out there, but there are also a lot of opportunities for art. Eventually you will find one that vibes with your aesthetic.

Some of your work like the Spirit Wall installations is so transitional because you paint over them annually. Do you ever struggle covering old work to replace it with something new?
Yes, I am not a tall man and that wall at Spirit is very large, so buffing it is extremely hard. ;)

I recently saw that you’re starting a fundraiser for a new Spirit Walls-Black Lives Matter mural. Tell me more about the upcoming project.
Yes! So, I'm turning over the Spirit Wall to an all-star roster of Black Pittsburgh artists this year in solidarity with the Black Lives Matter movement. This idea came as a result of the dialectic surrounding the BLM protest mural downtown and talking directly with some of the artists involved in the reform of that piece, namely Camo Nesbitt, about using platforms that white street artists in the city have procured to amplify and elevate Black talent in the city. It's part of a series of initiatives that myself and a few others are organizing through the summer and fall to help transform the art community in Pittsburgh to a more inclusive and open one.

This coloring book is coming out during one of the most important civil rights movements in modern times. Do you think artwork has the power to bring change?
The coloring book? Yes and no. The book might be able to start some conversations and educate folks a little bit, and having City Paper as an alternative media source is also important, but the impetus for true social change is always and will always be the Will of the People.

Do you believe artwork has the power to heal?
Heal? No. Soothe, yes. Art is a salve. A balm we can rub on our sore muscles while we rest. But it can't set broken bones, or stitch up wounds. Only People Power can do that.