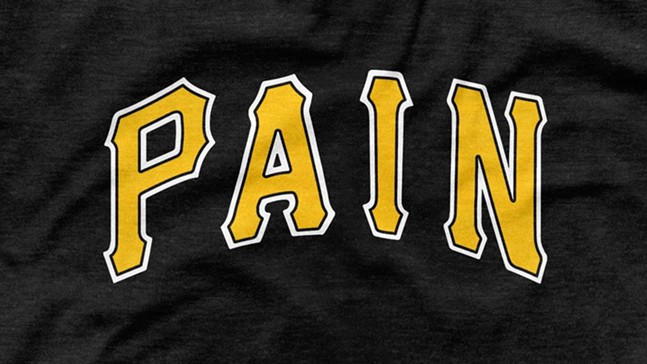 Courtesy of Pittsburgh Clothing Co.
The Major League Baseball regular season starts later this week, and there are little signs of optimism for the Pittsburgh Pirates. After last season, which was shortened due to COVID, the Pirates finished with the worst record in the league. Since, the team has shipped away some of its best players, like Josh Bell, and haven’t signed any big name stars. Many fans and analysts are not expecting the team to be very competitive.

One local Pittsburgh company is hoping to rally around that shared depression Pirates fans might have in hopes of commiserating. Online retailer Pittsburgh Clothing Co. recently introduced a Pirates-inspired line feature the word “pain” in the Pirates’ signature font and color-scheme.

Wearing this means you understand it isn’t going to be fun for the next few years, but you care.


“Wearing this means you understand it isn’t going to be fun for the next few years, but you care,” reads a March 26 tweet from Pittsburgh Clothing Co. The pain logo comes in four different colors, and in T-shirts, sweatshirts, and long sleeves.

On social media, the design appears to be largely embraced by fans. There is a shared history of disappointment to being a Pirates fan, especially over the last few decades. In 1992, the Pirates lost to the Atlanta Braves after giving up 3 runs in the bottom of the 9th inning and missed throwing out the game winning run at the plate in Game 7 of the National League Championship series. After that year, the Pirates didn’t return to the postseason for 20 years.

There feels like no hope for the Pirates to return to the postseason this year, as their payroll is the second lowest in baseball.

Most of Pittsburgh Clothing Co.’s Pirates patterns are not all doom and gloom. Some celebrate Pirates greats like Roberto Clemente and the last Pirates team to win the World Series, the “We are Family” crew of 1979.

But “Pain” isn’t the only tongue in cheek reference to the continued uphill battles the Buccos face. Also available at Pittsburgh Clothing Co. is merch with a pirate ship in a filled glass bottle that reads “This team makes me drink.” Cheers to that!