Where are the spark and soul and rousing energy? 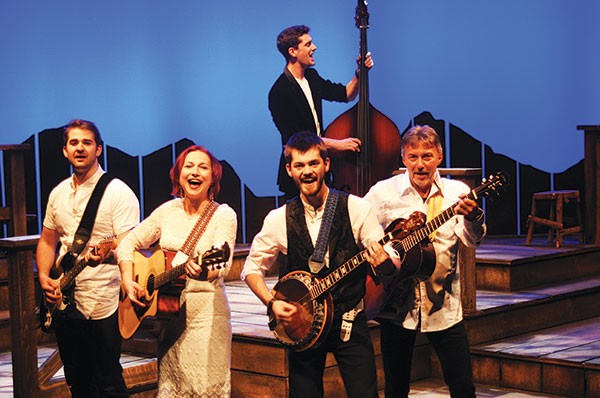 Photo courtesy of Matt Polk
The cast of Ring of Fire, at Pittsburgh CLO

RING OF FIRE: THE MUSIC OF JOHNNY CASH

I walk the line, debating whether Ring of Fire: The Music of Johnny Cash is really bad ... or really, really bad.

The show's cast, four men and one woman, sing Johnny's songs and aren't supposed to imitate him. But they often do. Performer Nicole Stefonek also imitates Cash's wife, June Carter — a tough stretch since Stefonek looks too much like a young, carrot-topped Bette Midler and sings in a high frilly voice.

The show was created by Richard Maltby Jr. and conceived by William Meade. But it covers ground that anyone familiar with even a cursory biography of Cash will already know: He was raised poor; his 14-year-old brother, Jack, died in a freak accident; he was a drug addict because he thought the red, orange, green and black pills made him a better performer; and he fell in love with June at first sight at the Grand Ole Opry.

Writing in the show's program, Van Kaplan, the CLO's executive producer, cashes in and spends his first three lengthy paragraphs on Cash's career ... facts and quotes that should be in the show, not on a page no one reads. (Except me.)

Maltby and Meade knew the show was in trouble; it was a hit in Buffalo but a bomb on Broadway, and was renamed several times. So much work was done that Kaplan admits, "Maltby Jr. and Meade continued to make a great idea greater."

Director and choreographer Guy Stroman gives the show little fluidity between the awkward blackouts; any creative moves are impossible on Tony Ferrieri's stage, which is as big as two Johnny Cash postage stamps issued last year.

What the hell is going on here? Where are the spark and soul and rousing energy?

Cash's mother once told him that overcoming adversity means putting faith in the Lord. I agree.

I also have decided that if I am ever forced to waste two hours on such nonsense again, I will become a boy named Sue who heads to Actors Equity to sue.