Pittsburgh CLO’s Once is a sweet, if flimsy, love letter to music 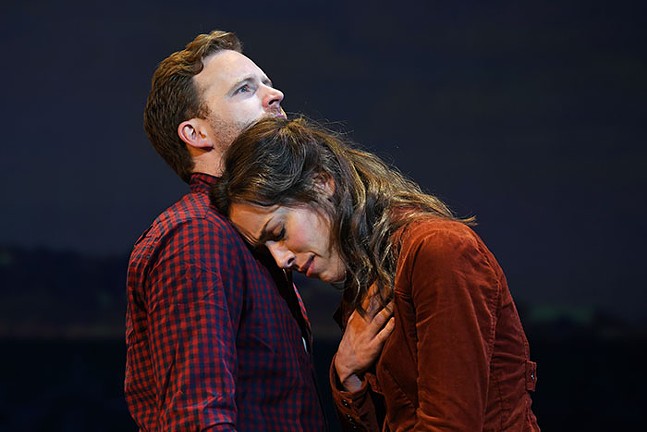 Photo: Matt Polk
Stuart Ward and Esther Stilwell in ONCE

Staging the Tony Award-winning Once at the Benedum Center feels like something of a contradiction in terms.

In 2011, the musical successfully completed the delicate balancing act of telling a small, human story while managing to be a Broadway crowd-pleaser. It’s not an uncommon challenge in theater. Unquestionably one of the most intimate art forms, theater frequently occupies opulent spaces — like the 3,000-seat Benedum — which were built for spectacle, not intimacy. Is it Once’s fault if the story it chooses to tell is a little too small to fill that space?

But there are also moments when Once  — directed by Michael Zygo, staged by Pittsburgh CLO through Sunday — feels exactly as big as the Benedum: when the characters are singing.


The musical tells the story of Guy (Stuart Ward), a vacuum repairman and Dublin street musician. His music captivates a young Czech woman, Girl (Esther Stilwell), when she meets him playing guitar in the street. Most of the songs in the raw, folky score are presented as Guy originals, including the deeply-felt, Oscar-winning “Falling Slowly,” which appears early in the show. Guy wrote the song for an ex and wants to throw it away in his quest to forget her, but when Girl convinces him to sing it with her (him on guitar, her on piano), the instant connection they share through the music is palpable.


Music keeps bringing Guy and Girl back together, and she soon turns it into her personal quest to get him a record deal. When they aren’t singing, though, everything — the plot, the characters, and the performances — feels shakier. Maybe, as their placeholder character names suggest, Guy and Girl are meant to stand for something bigger, but they just end up feeling thin and under-drawn.

It’s the side characters who get pulled into Guy and Girl’s plans that bring heart to the story. Girl’s trio of Czech friends (Andy Christopher, Cassidy Stirtz, and Lucas Papaelias) inject energy and humor into Once whenever they’re onstage; Guy’s father (Craig MacDonald), still coping with the loss of his wife, is a warm presence; and Andy Taylor’s bank manager has a show-stopping solo of his own.


And impressively, all of them are playing instruments throughout the show. Once is about the transformative power of music, not just for Guy and Girl, but for everyone around them. The show suffers from a lack of tension — because every character agrees as soon as they hear Guy’s music that he’s a phenomenally talented songwriter, there’s never much of a question whether or not he’ll succeed — but what it wants us to think about, at least, is how that music affects the people who hear it and play it.


“You cannot walk through your life leaving unfinished love behind you,” Girl tells Guy. It’s unfortunate that Once itself, as charming as it is, might leave you just a bit unsatisfied. But it will also almost certainly make you itch to pick up a guitar.