A new musical comedy is promising, but overstuffed 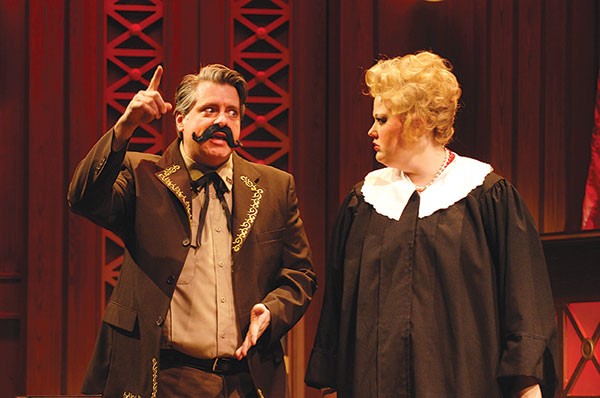 The elevator pitch for Judge Jackie Justice IS appealing: a musical spoof of Judge Judy with lots of Jerry Springer thrown in.

And it's written by a couple of local boys: book and lyrics by Christopher Dimond and a score from Michael Kooman.

Plus, it's getting a world premiere by Pittsburgh CLO — and let me take a second to applaud the CLO for devoting energy and encouragement to the development of new musicals.

Additionally, the company has spared no expense in outfitting a lavish production with a gorgeous set by Tony Ferrieri, eye-popping lights from Scott Nelson, and Susan O'Neill's funny and defining costumes.

And there's loads of performing talent. Kara Mikula plays the title role with unabashed glee and sings with powerhouse pipes. Jason Coll is the narrator/love interest, and because he's been gone so long from area stages, I'd forgotten what a beautiful voice he has.

Add in the rubber-limbed Jonathan Visser playing the show's villainous, conniving studio exec to hilarious effect. Maggie Carr and Connor McCanlus play all the loopy characters brought to Judge Jackie's TV court with an enormous range and exceptional comedic timing. (A big nod, too, to whoever's executing all those lightning-quick costume changes backstage.)

But it's curious: Even with all that, on the whole, the show (which admittedly is brand-new) still has some distance to go before it can be called a successful piece of musical comedy.

The trouble, ironically, is that, if anything, Judge Jackie Justice feels like it's already been overworked: It's all too much. There's too much plot, too many digressions, too many characters, with a focus too broad and jokes too easy. The show's creators have, apparently, incorporated every suggestion that anyone along the workshop/development journey have thrown at them into what is, in truth, a sweet-natured but slender idea.

Allow me to offer my own unasked-for advice. Coco Chanel used to say: "Before you go out, always take something off." Judge Jackie Justice needs to get out much, much more.